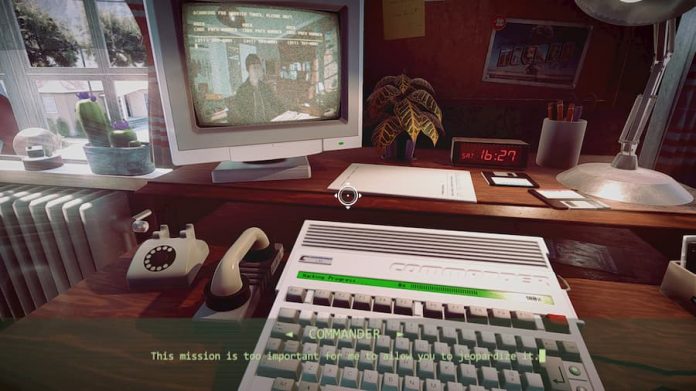 An adventure sim game set in the ’80s, Commander ’85 will no doubt bring back warm and fuzzy memories for anyone who owned a Commodore or Amiga.

Hopefully your Commodore didn’t get taken over by a powerful AI and end up getting you embroiled in some government mystery, however. Because that’s essentially what happens in Commander ’85.

The majority of Commander ’85 will see you sat in front of the titular computer. You can input commands to run programs and achieve the tasks you need to do. You can also nosey around your own bedroom, fiddle with a TV set, turn on the radio and interact with your pesky, meddling mother. More importantly, you can pet the dog.

But Commander ’85 is mostly about interacting with your computer’s AI. That means typing in lots of commands, selecting various options and figuring out the right course of action. It’s available on Xbox One and PC, but this is definitely a game suited to a PC over console; typing in commands with your Xbox controller is laborious and tiresome. Having a real keyboard to hand makes the game feel much more intuitive.

Intuitive controls are one thing, but Commander ’85 doesn’t always feel so intuitive to play. There’s no hand-holding at all here. You can change between play modes – you can have Commander present you a list of commands, or type them yourself from scratch. But even having the list of commands at your disposal doesn’t make things much easier. There’s a learning curve as you figure out what commands do what. And while your first couple of tasks – involving hacking into your school’s computer to change your attendance record – is straightforward enough, it soon gets much tougher.

It’s Commander ’85‘s nostalgia factor that draws you in. Sitting down in front of an old computer that looks exactly like the one you had yourself in the late ’80s is fun; and the relics you come across from the era – toys, TV commercials, posters – will make you smile. The game itself is a tough nut to crack, but if you have the patience to learn how to use the Commander ’85, there’s an intriguing story just waiting to be told.

Commander ’85 is available on PC and Xbox One.