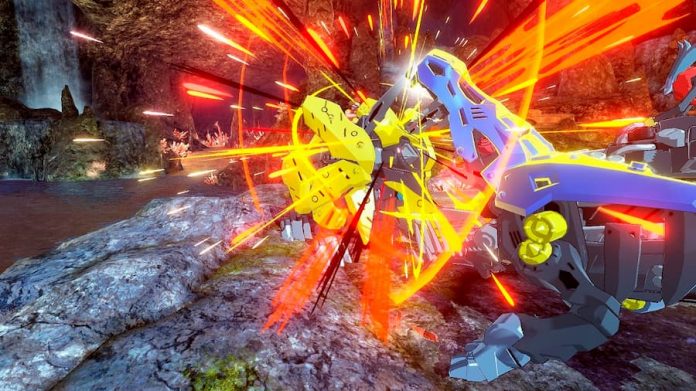 Fancy a fighting game that lets you take control of GIANT DINOSAUR MECHS? Of course you do. Enter Zoids Wild: Blast Unleashed.

Zoids as a franchise has been around since the 1980s, with a toy mech range, manga, anime, and numerous videogames. It’s not as well-known in the West though, and it’s likely that Zoids Wild: Blast Unleashed might be your first encounter with the franchise. But it doesn’t matter; whether or not you’ve heard of Zoids before, there’s no denying that the idea of riding hulking mech beasts into battle is a very appealing one.

A one-on-one fighting game, at the heart of Zoids Wild: Blast Unleashed is an easy to pick up combat system. It offers enough depth to keep you going back for more, but it’s never overly complicated. It’s clearly been designed to appeal to younger players, but that doesn’t mean there’s not enough here to appease us grown-ups, too.

There are three main modes to choose from in Zoids Wild: Blast Unleashed, and a practice mode which allows you to learn the ropes. Story Mode is where you’ll likely spend the majority of your time; short dialogue sequences nicely illustrated with anime spin a narrative in between battles, but unless you’re invested in the wider world of Zoids, there’s nothing too exciting on offer. It doesn’t matter though; the gameplay is clearly the main draw, and Story Mode packs in around 200 episodes to complete. Each episode has you taking control of a specific Zoid, taking on a range of opponents.

There’s also Continuous Battle mode, which challenges you to play through (and win) seven fights in a row. It’s an interesting mode to jump into if you’d like a challenge without committing too much time to the game. Between each battle, you can choose a bonus, increasing your score, battle power and more. 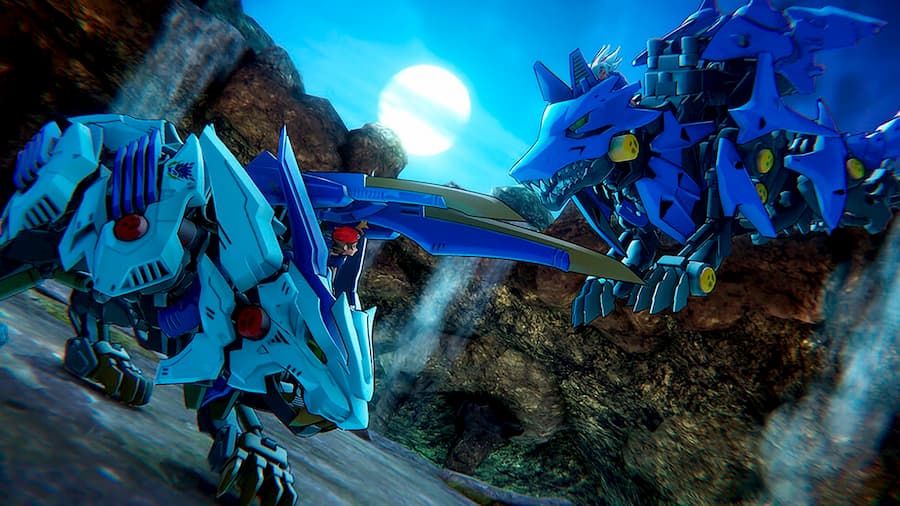 Zoids Wild: Blast Unleashed‘s final mode is Battle, allowing you to jump straight into a fight against an AI opponent of your choice, or challenge a friend in local multiplayer. There’s no online multiplayer here, which feels unusual for a fighting game, but considering it’s aimed at kids, it makes sense.

The game features 16 Zoid/rider combinations. It’s not the biggest line-up for a game of this type, and it’s more disappointing that only five of them are unlocked from the outset. You’ll need to unlock the rest by playing through Story Mode and Continuous Battle. If you’re mainly going to be tackling the game alone, that’s not so much of a problem, but if you were hoping to jump straight into a two-player battle, it means your options are severely limited until you’ve made some single-player progress.

Whichever mode you’re playing, fights take place in a 3D arena. There are 14 environments to choose from, and thankfully they’re all unlocked from the outset. They’re all fairly basic but nicely designed. It’s not a bad-looking game, but unusual for a Switch title, it’s one that benefits from playing docked. The Zoids are beautifully designed, and a larger screen better emphasises their details. 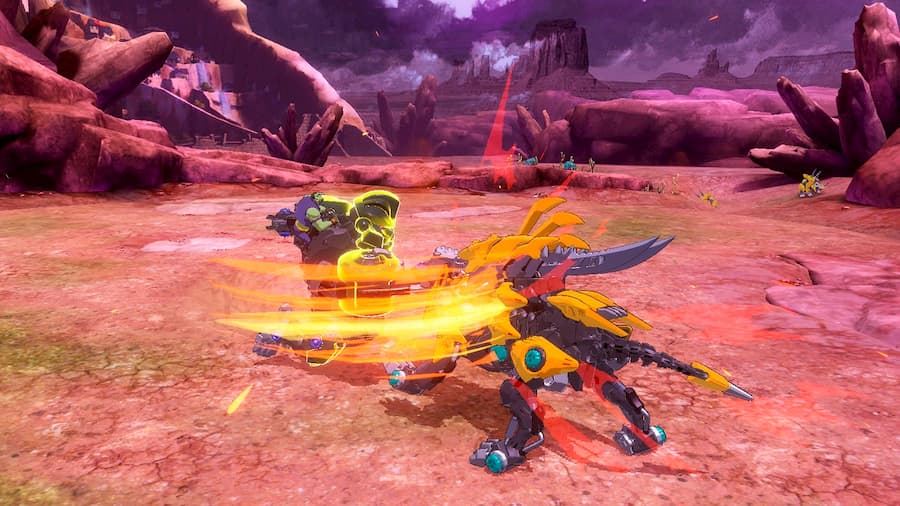 The act of playing out a fight in Zoids Wild: Blast Unleashed is entertaining. You can move your Zoid freely around the battle arena, and making use of the space on offer is key to being victorious; sometimes putting some space between you and your opponent is the best course of action. Getting out of the way also allows you to line up your next attack; all Zoids have weak spots, and hitting from the side or behind will do more damage.

Each Zoid has their own signature quick attack (Y) and heavy attack (X), which can be repeated to perform combos. You can also use a guard break attack (A) at the end of a quick or heavy combo to get in an extra hit. Three Wild Actions, unique to each Zoid, can be activated by holding R then pressing a face button. If these hit an enemy they’ll do a good amount of damage, but they have a cooldown so you can’t overuse them. Add to these a dodge manoeuvre and special attacks, which we’ll talk more about shortly, and you’ve got a fairly hefty repertoire of moves under your belt.

You can dodge some incoming attacks by pressing B, but others – like quick attacks – need to be countered instead. Counterattacks allow you to dodge quick attacks while also getting a hit in yourself; pressing Y or A while holding L will initiate a counterattack, providing your timing is right. You can also press X while holding L, which will instead blast your opponent away. Heavy attacks need to be dodged, but you can follow them up with a quick attack. 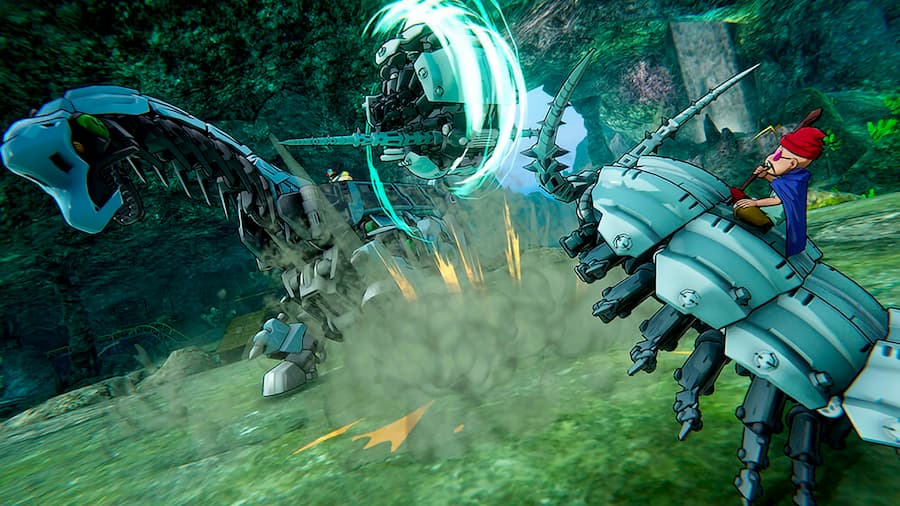 Those special attacks, known as Final Blast, are achieved by filling up both your rider and your Zoid’s blast gauges. Your rider’s gauge charges as you use quick attacks, and the Zoid’s charges as you use heavy attacks. Once both bars are filled, pressing L and R together will activate Wild Blast, which powers you up for a period of time. Using Wild Blast alone will allow you to do massive damage to your opponent, and it also upgrades some of your Wild Actions, but pressing L and R again before Wild Blast depletes will activate Final Blast, a devastating attack.

Not every character has Wild Blast, however; some instead have Dark Blast. This is activated in the same way, but it doesn’t require a blast gauge to be filled. Instead, it drains your health when activated. It adds an element of risk versus reward; if you’re low on health, it’s perhaps not worth risking, but if your powered up state could turn the tide of battle, it may be worth a gamble.

All in all, there’s a decent amount of depth to Zoids Wild: Blast Unleashed despite its simple appearance. There’s plenty of single-player content, thanks to the hefty Story mode, but seasoned fighting game fans will notice the absence of online multiplayer. Still, there’s an enjoyable fighter here – and getting to control a giant dinosaur-shaped mech is a novelty that doesn’t quickly wear off.

Zoids Wild: Blast Unleashed is available on Nintendo Switch. This review was facilitated with a code provided by the publisher.