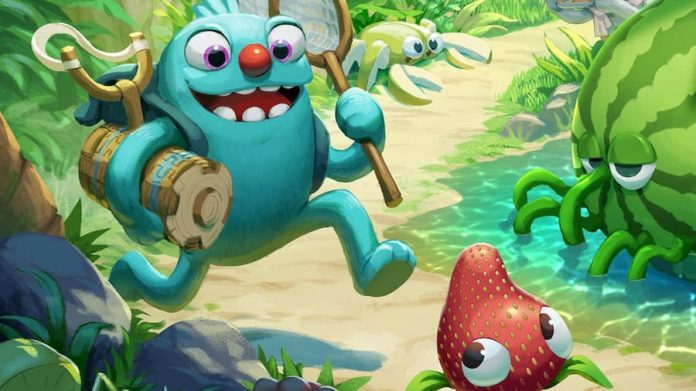 You probably haven’t played anything quite as infectiously adorable as Bugsnax. Alongside a swathe of new releases that centre around violence and high-octane action, its laid-back cuteness is the perfect antidote.

Out on PC, PS4 and PS5, Bugsnax is an adventure puzzle game that casts you in the role of a journalist who’s been sent to chase a story on Snaktooth Island. Turns out there are rumours of ‘bugsnax’ – part bug, part snack creatures – and you reckon it’ll make a good story. Your editor isn’t necessarily convinced, but she lets you follow your whim anyway. So off you set, in search of Snaktooth Island, and famed explorer Elizabert Megafig, who invited you in the first place.

Things aren’t quite what you expect when you arrive on Snaktooth Island, however. Seems you’ve arrived at quite the tumultuous time. Lizbert has gone missing, and all of the island’s residents have fallen out. The village is practically empty, save for Mayor Filbo, and so your main goal in Bugsnax is to track down each resident, bring them back to the village, and find out what’s happened to Lizbert.

You’ll come across each resident one by one, and none of them will move back to the village without some persuasion on your part. Typically, that means helping them out with various tasks; tasks that generally centre around those titular bugsnax. You see, almost every resident of Snaktooth Island can’t resist the sweet lure of a buggy snack. They’ll want you to hunt down certain types and, er, feed them to them. And if bugsnax themselves aren’t weird enough, the fact that eating one turns one of your limbs into that particular snack certainly is. Snaktooth Island isn’t your typical locale, that’s for sure.

From the word go, Bugsnax is simply adorable. The residents of Snaktooth Island – the adorable and hilarious Grumpuses – are all delightful, packed with a huge amount of personality. They’re all fully-voiced, and to an impeccably high level. You’d be forgiven for thinking you’re watching a Pixar animation unfold at points, especially when you take into consideration just how lovely this game looks on PS5. Its cartoon-style environments are nice, but it’s the characters themselves that really shine. Furry and colourful, each and every one of them is a delight to behold. The detailing on their fur is incredible. 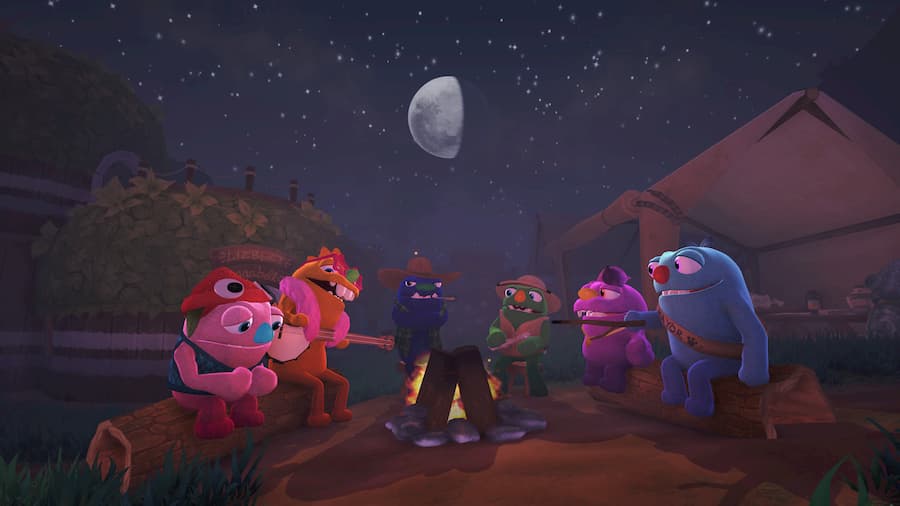 There’s a huge range of missions on offer, too. You’ll not simply be collecting bugsnax; although that’s part of it, a ‘collect ’em up’ this is not. Well, unless you want it to be. Each bugsnax needs to be caught in a different way, and figuring it out is a lot of fun. You’ll gather a set of tools as you progress through Bugsnax; starting out with a simple trap, you’ll later gain a sauce gun, a grapple hook, a tripwire and more. Sometimes, just one of these things is needed to catch a particular bugsnax. Other times, you’ll need to combine two or more of them in weird and wonderful ways. You’ll need to think outside the box, so you’ll occasionally be scratching your head as you try (and fail) various hare-brained schemes. But when you do finally catch an elusive bugsnax, it’s a real cause for celebration.

Snaktooth Island is pretty large, so there’s a sprawling map to uncover as you play through Bugsnax. New areas open up gradually, so you’re never overwhelmed with where to go or what to do. There’s no minimap though, which can make finding your way around – or pinpointing the location of a specific island resident – a little difficult. You’ll get your bearings eventually, but expect to make a few wrong turns now and then. 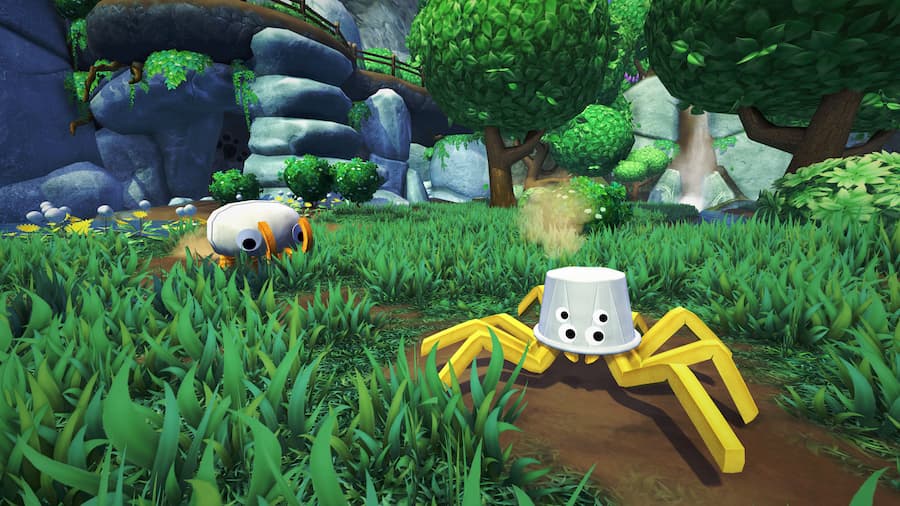 Exploring is worthwhile though, and you’ll be encouraged to do so through the game’s missions. Each area has its own unique bugsnax, making up over 100 altogether. Each and every one of them is impeccably designed, and you’ll snort with laughter at some of them. There’s the Fryder, for example; a ketchup pot for a body and eight fries at legs. Or the Sandopede, a giant sub sandwich. The cherry on the top is the way each one repeats its own name again and again as it goes about its business. Hearing the burger-shaped Bunger mutter ‘bunger, bunger, bunger’ as it charges into you never gets old.

The variety of gameplay on offer in Bugsnax is part of the reason why it’s so engrossing. One minute you might be hunting down the bugsnax required to complete an objective, then upon finding them, you’ll have to work out how to catch them. And that in itself is a varied task thanks to each bugsnax’s quirks and the breadth of your tools. Along the way, you might have other tasks to complete, too, like seeing what a village member gets up to at night, or conducting interviews to find out more about the village residents and Snaktooth Island. You’re never stuck repeating the same monotonous tasks. 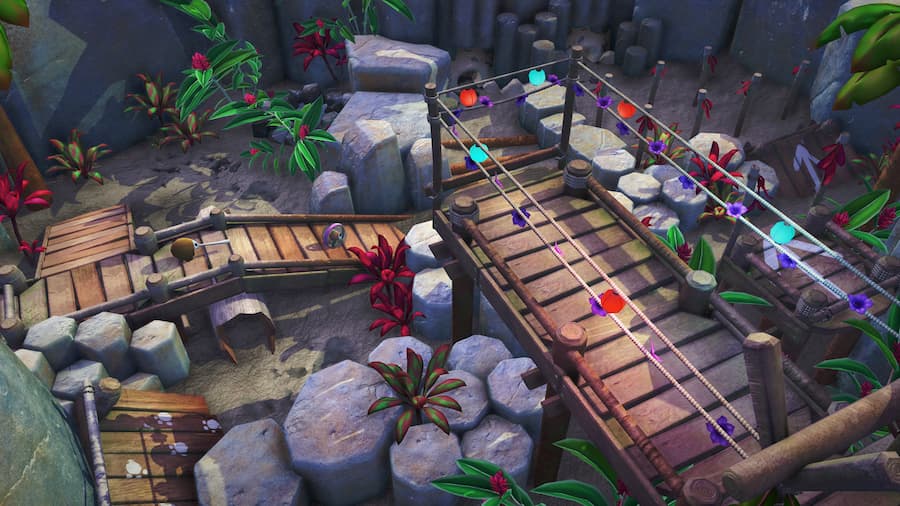 It also helps that simply talking to each resident is an utter joy. Along with their excellent voice acting, the script is absolutely spot-on. There’s plenty of humour shoved in, the sort that appeals to both adults and children. You’ll become invested in each character’s little quirks and personality traits, and you’ll long to find out more about each of them. You’ll probably also relate to some of them rather well, too – which, considering they’re fuzzy creatures with snacks for limbs, is quite a feat.

Bugsnax is a joyful, lovely experience from start to finish. With a surprising amount of heart, it’ll hit you in the feels time and again – even when you’re force-feeding snax down the throat of someone who’d rather keep them as pets (sorry, Gramble). It’s the sort of game you can’t help but play with a huge grin on your face and, long after finishing the main storyline, you’ll want to return to Snaktooth Island to round up more snax and hang out with your new furry friends. You might not be a Grumpus yourself, but Bugsnax certainly leaves you with a fuzzy feeling inside.

Bugsnax is available on PC, PS4 and PS5. We reviewed the game on PS5 with a code provided by the publisher. 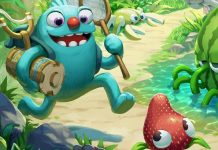