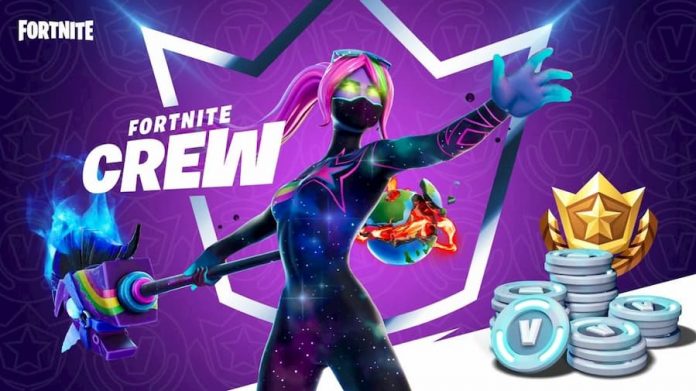 Starting on 2nd December, Fortnite players will be able to pay £9.99 a month to join Fortnite Crew, a premium subscription service.

Ah, monthly subscriptions. They make the world go round lately – or so it seems. Everyone’s jumping on the bandwagon in some form or another, and so it only makes sense that Epic would join in with Fortnite Crew.

Though actually, if you’re a regular player who’s ever bought any premium content in the game, Fortnite Crew sort-of makes sense.

That’s not bad value. 1,000 V-Bucks costs £6.49, and each season’s battle pass costs 950 V-Bucks. Those two items alone cost more than the asking price. Granted, a season typically runs longer than a month, but consider the value of the outfit bundle you’ll receive and it makes it worth it. If you’re someone that regularly buys those things in Fortnite anyway, of course.

If you don’t bother with Battle Passes and V-Bucks, then the Fortnite Crew subscription is unlikely to change your Fortnite experience. But it’s a new option for those who do spend money in the game.

When it launches on 2nd December, players who choose to subscribe will get an exclusive Galaxia outfit (pictured above), alongside a Cosmic Llamacorn Pickaxe and Fractured World Back Bling.

You can subscribe from within the game; just head to Fortnite‘s Item Shop or Battle Pass purchase page. And once you’re signed up, you can cancel at any time.