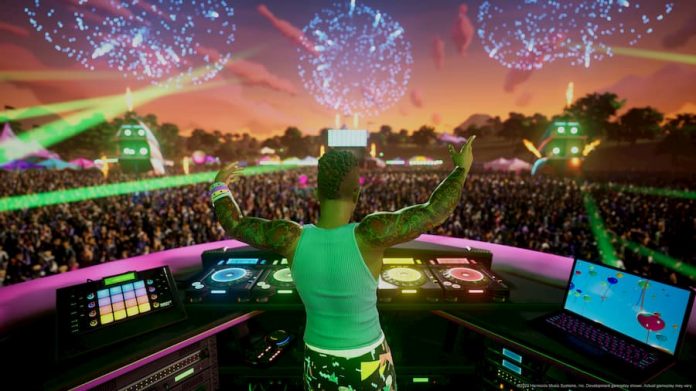 Turns out, being a DJ is harder than it looks.

At least in the world of FUSER, anyway. It’s not just a case of pressing ‘play’ on your iPod and sitting back with a cold one. Nope; you’ve got to man your decks constantly, dropping tracks on the beat, muting them, switching them, even adding your own instrumental flair. It’s tough – but it’s also a heck of a lot of fun.

FUSER is the latest game from Harmonix, the developer behind Guitar Hero. But this time, plastic guitars and drum kits have been left behind and replaced with a full deck of hit songs ready for you to remix. Ever wondered what bad guy sounds like mixed with Dragostea Din Tei? Well, now you can find out.

There’s a huge library of songs available, spanning all genres. It’s an excellent line-up; there’s a few obscure choices you probably won’t have heard of, but there’ll undoubtedly be more than a handful of songs you know (and hopefully love). The base game features a library of over 100 songs, and if you opt for the VIP edition, you’ll have an extra 25 tracks thrown in.

You can’t access all of your songs right away, however. A sizeable selection will be unlocked from the start, but you’ll need to unlock others as you play. Some will be locked out until you reach a certain player level, but others can be unlocked using in-game credits that you earn as you progress. It means that, outside of the ones unlocked behind progress, you can choose to prioritise the songs you like best. 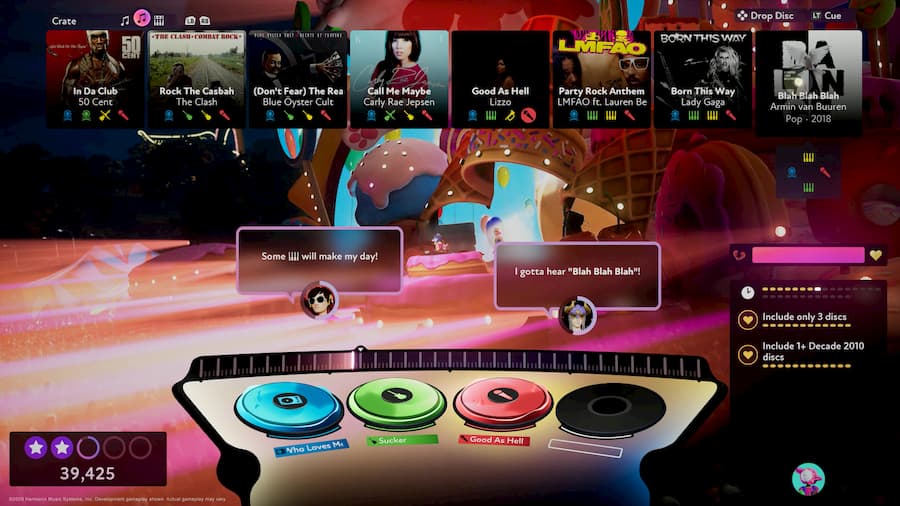 The main meat of FUSER is its single-player Campaign mode. Here, you have six stages to play through, each with six performances to nail. Before each set you perform, you’ll need to add a number of tracks to your ‘crate’. Sifting through over 100 songs in the middle of your performance is a bit much, so in Campaign, you’ll typically only have around a dozen tracks with you. A handful will be chosen for you, but you’re able to fill in the gaps with whatever you want.

In Campaign mode, FUSER isn’t just about making good music; to succeed, you need to be pinpoint accurate on the beat. You can’t just set up a killer mix and leave it playing – your tunes need to be constantly changing in order to keep the crowd interested. That means dropping in new tracks frequently, but doing so at the right time; either on a down note or a specific beat.

You’re given both an overall score out of five stars, and a score based on how much the audience enjoy your set. As long as you nail the majority of your drops, it’s easy enough to get a good audience score. but achieving a high star rating is difficult until you’ve fully learned the ropes. You can fail if you’re not doing well enough, though it is possible to turn off the fail state – it’s advisable, at least to start with, as it lets you get the hang of things without worrying too much about your performance. 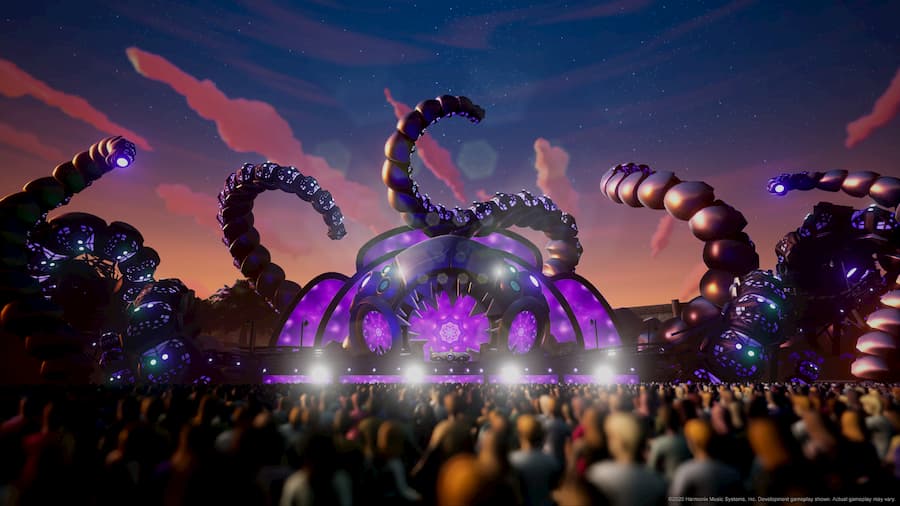 Throughout your set, you’ll have a constantly-changing list of tasks and challenges to complete, and nailing these is key to your success. You might be asked to play a specific section from a particular song, have only two tracks playing, or mute a particular track. Some need to be done against the clock, so you need to constantly keep an eye on your objectives. You’ll also get audience requests for specific songs, eras or genres as you play. You only get a very small window to complete these, but doing so gives a huge boost to your score and audience satisfaction.

Campaign also drip-feeds new abilities and content to you. Your first stage covers the basics: changing tracks and hitting the down notes. But further stages all introduce new elements: muting tracks, isolating tracks, adding in your own instrumentals, and more. FUSER packs in an impressive amount of options, but they’re presented to you in a way that never overwhelms.

There are plenty of modes outside of Campaign, too. Freestyle mode lets you hit the stage and break free. With no worries about racking up a high score, you can let lose with your decks and all the bells and whistles they offer. Here, you can have more songs available to you, too. It’s a great place to practice and just enjoy the act of making music.

You can also battle against another player online. I’ve not been able to try this out pre-launch, but it promises an intense head-to-head battle. Warning you that it’s not for beginners before you start, you’re challenged to rack up the best score. You’ll need to nail every beat, and have a good knowledge of what tracks mix well together. If you’ve got a competitive streak in you, it should be a good place to spend time once FUSER‘s campaign has been completed. 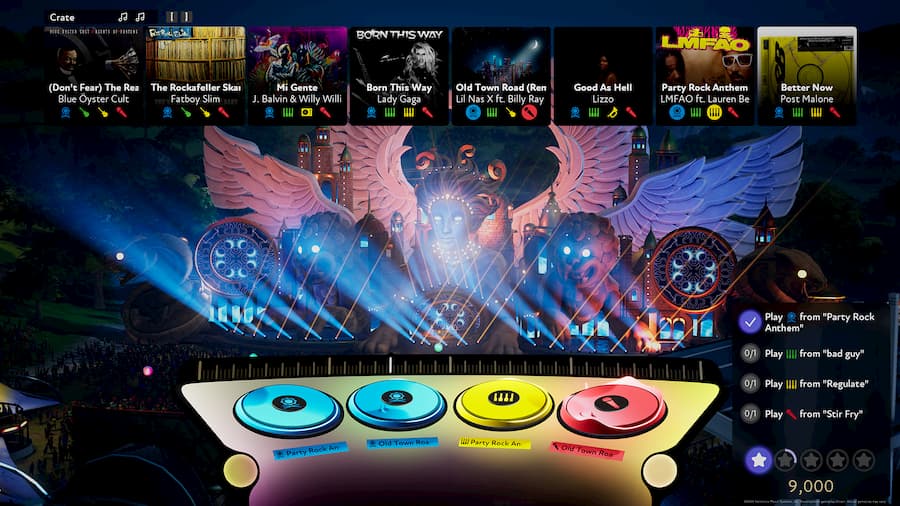 So, FUSER packs in plenty of game modes, and its core gameplay is a lot of fun. It’s also presented beautifully. It looks incredible on Xbox One X, and offers up some graphical options; you can opt for 4K resolution, or go for a dynamic resolution if you’d rather have better quality visuals. It looks great on either mode, though. Before you begin, you’re able to create your own character from a surprisingly robust creator. Choose a body type, skin tone, hair, eyes, outfit and more – you can keep customising too, as you’ll unlock new outfits as you play.

My only reservation about FUSER is how much longevity it will have outside of the campaign. There’s a great library of songs, but I can imagine players will grow tired of the same tracks eventually, especially since everyone will undoubtedly have their favourites that they use again and again in their mixes. There is a store, so new songs will be available to purchase, but their price could be a dealbreaker. After all, the VIP edition is a whopping £100, and even then, you’ll possibly crave a new song after 10-15 hours with the game.

But the same is true for any music-based game, and FUSER‘s library is much vaster than most. If you’re a music lover, there’s a lot to love here. FUSER looks great, its track list has something for everyone, and its gameplay is a hell of a lot of fun. I guarantee you will not be able to keep your feet still as you drop your mixes together. Even if your crowd isn’t digging it, I guarantee that you will be.

FUSER is available on PC, PS4 and Xbox One. We reviewed the game on Xbox One with a code provided by the publisher.