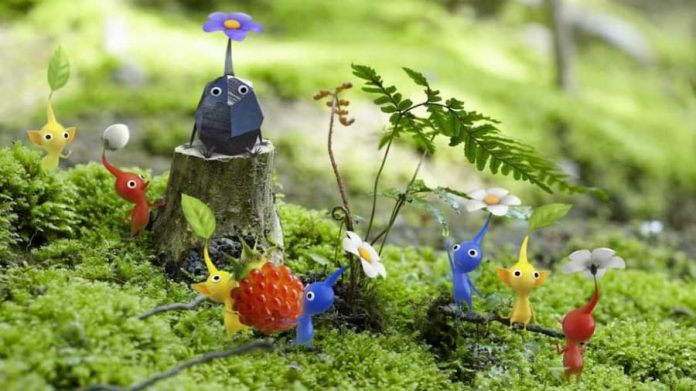 That’s basically the moral of every Pikmin game to date. In them, you take on the role of a space explorer that discovers an alien-like species and the first thing you do is have it do your bidding and fight for you. It’s a bit like the opposite of the “never talk to strangers” lesson. Pikmin 3 Deluxe, available now on Switch, is an improved version of 2013’s Pikmin 3 which appeared on Wii U. Along with quality of life improvements including an improved lock-on system and more balanced enemies, this Deluxe version also includes new side quests and new gameplay modes.

Pikmin 3 Deluxe tells the story of three explorers – Brittany, Alph and Captain Charlie – after they crash land on the planet PNF-404. The three space crew members are separated at first, but with the help of Pikmin, small vegetable-like creatures that live on the planet, they are soon reunited. Pikmin are incredibly helpful and each have their own set of special abilities. The Red Pikmin, for example, are good fighters and are resistant to fire. The Yellow Pikmin can be thrown very far and high and aren’t affected by electricity. Blue, Rock and Winged Pikmin all have unique abilities, too.

Once the crewmates are reunited, your main goal in Pikmin 3 Deluxe will be finding a device that will allow them to make their way back to their home planet. You’ll also be collecting food to take home – which was the crew’s main mission before they crash-landed. In order to find items and collect food, you’ll have to explore PNF-404 and use your Pikmin to help you reach places you couldn’t on your own.

For example, many areas on the planet will be blocked by doors. You can use your Rock Pikmin – so called because they look just like rocks – and throw them at glass doors to break them. Your Pikmin will also do the heavy lifting for you and bring fruits and any technology found out in the world back to the ship. When you aren’t having them do things for you, you can use a whistle to tell the Pikmin to come with you, as well as toss them around. 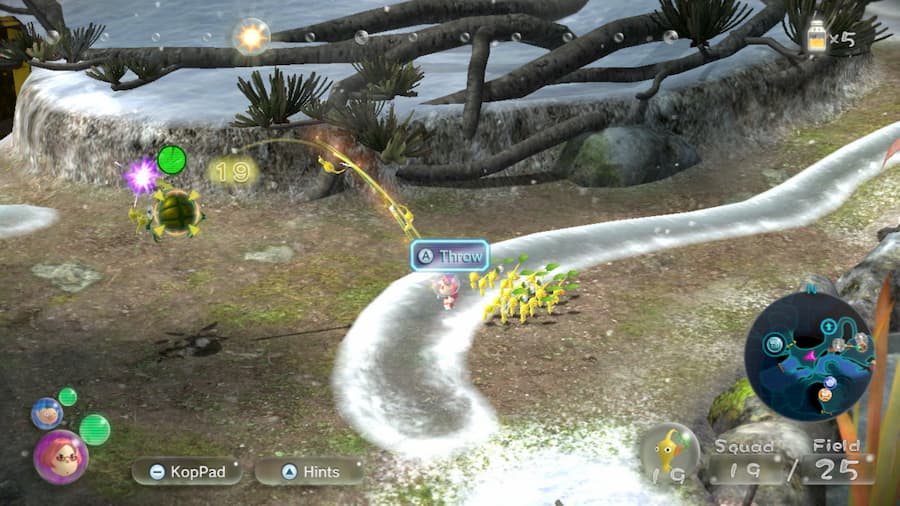 During your adventure you’ll also have to create more Pikmin. Unfortunately, the trouble with Pikmin is that they die pretty easily, so you’ll have to create as many as you can so you don’t end up with none. To create more Pikmin, you’ll find little pills that the tiny creatures can take back to their ship to spawn more, or they can bring back the bodies of any enemies they killed along the way. It’s a bit grim – especially when the Pikmin are carrying the gigantic bodies of the game’s bosses. But you gotta do what you gotta do.

Speaking of big baddies, Pikmin 3 Deluxe‘s fantastic bosses are a real highlight of the game. There may be more than one in each level of the game, but each boss drops big rewards. Seeing as the Pikmin franchise is geared towards a younger audience, none of the bosses are too difficult to figure out (and some bosses have hints laying around that help you too), but these bigger enemies are exceptionally designed – and rather scary the first time you come face-to-face with them.

One of the first bosses you’ll come up against is a giant caterpillar with a hard outer shell. Having to throw Rock Pikmin at the creature to break the shell while he’s charging at you with his pincers is genuinely nerve-wracking. Bosses add diversity to Pikmin 3 Deluxe, breaking up the typical gameplay which could otherwise get monotonous. 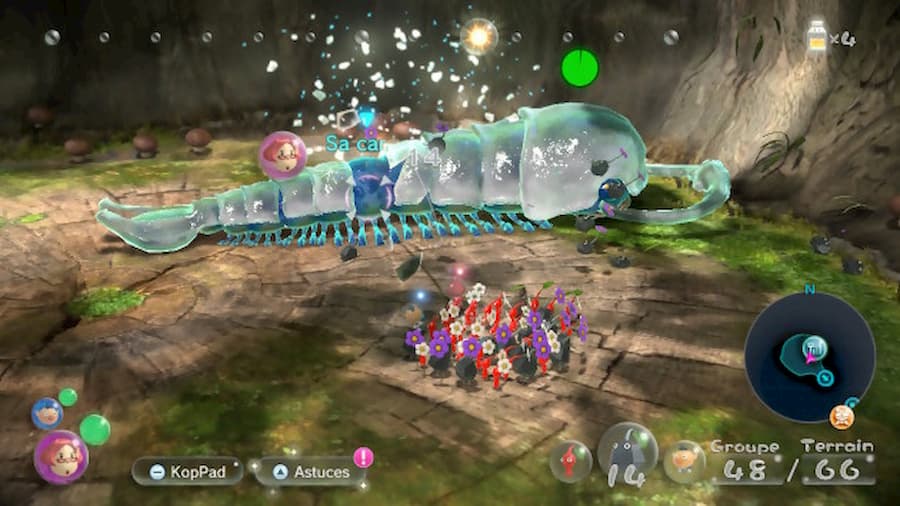 Unfortunately, with around 100 Pikmin traveling around with you, things can get a bit awkward. I played the first Pikmin on GameCube many times and issues I faced then are still present here in Pikmin 3 Deluxe. The first issue is, of course, losing track of Pikmin. There are a lot of thin walkways, places to fall from and water to drown in all around PNF-404, and if it’s possible, your Pikmin are going to get caught in those places. There’s nothing more frustrating than running through a cave with your Pikmin and realising you’ve left three behind because they got caught on something. And no matter what you do, it’s going to happen.

Along with this, there are some strange choices made in the game with regards to certain things that Pikmin do. When you ask Pikmin to pick up a grape for example, that Pikmin will grab a grape, take it to the ship, and then automatically come back and grab another grape without being asked. This can be helpful in some situations, but more often than not it’s an issue. You’ll be headed back to the ship, but have twenty or thirty Pikmin headed in the opposite direction. You’ll often have to spam your whistle a bunch to get them all to return to the group.

There were also a few smaller issues I encountered, like Pikmin randomly dropping bombs in the middle of our group and massacring almost all of them (!). That happened to me twice! There’s also an issue where even when you’re locked onto an object and you throw a Pikmin directly onto that object, sometimes they just decide they’re not up for it. Instead, they’ll either come back to you or stand in the place you threw them, looking around without a care in the world. 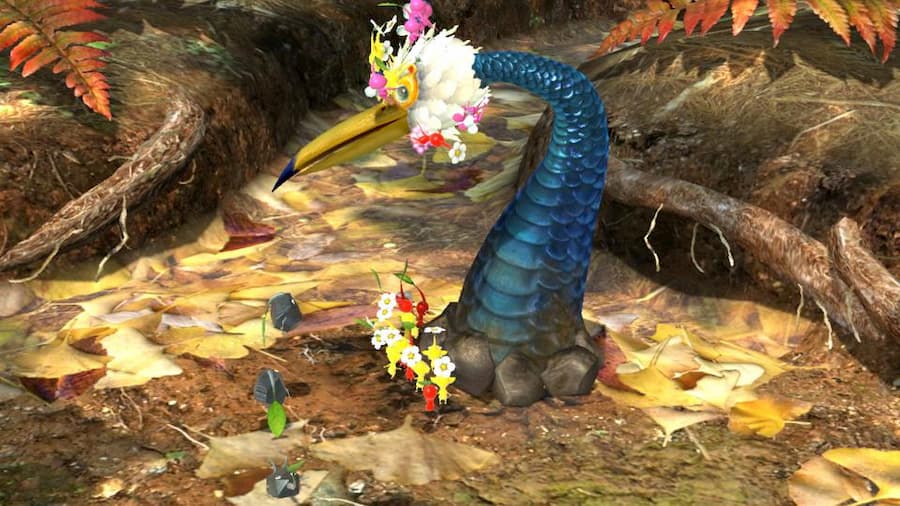 Essentially then, no matter your best efforts, sometimes your Pikmin just don’t do what you want them to do. It’s not a dealbreaker of course, but it can cause a few headaches along the way.

The new content added to Pikmin 3 Deluxe is mostly excellent. You can now play the main story in local co-op and, as is often the case, bringing a friend along can make the proceedings much more entertaining. There’s also a new difficulty mode if you’re up for a bigger challenge. The highlight, though, are the new Side Stories. In them, you play as Captain Olimar, the protagonist from the first Pikmin, as he attempts to gather gold and food resources to bring home to his planet. You’ve got a 10 minute time limit, so you’ll have to gather Pikmin fast and get as much stuff into the ship as quickly as you can before time runs out. It’s a nice and challenging way to encourage players to learn how to have their Pikmin do tasks quickly, and that knowledge definitely comes in handy later down the line in story mode.

Pikmin 3 Deluxe is a wonderful adventure, and even if you’ve fond memories of the game on Wii U, the new content makes it well worth returning to. While some issues that have shown up in previous titles are still present here, there’s nothing that ruins the fun of commanding your little army of Pikmin. Whether you’re a fan of the series or picking it up for the first time, there’s a lot to love here. With its extra content, co-op play and some truly excellent boss encounters, Pikmin 3 Deluxe might just be the best in the series.

Pikmin 3 Deluxe is available on Switch. We reviewed the game with a code provided by the publisher.