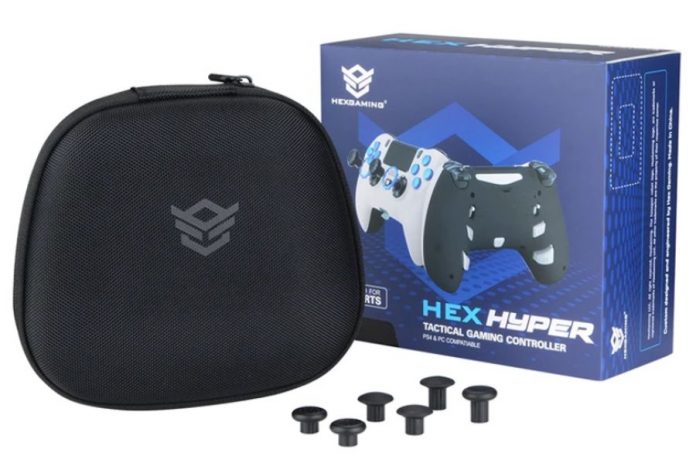 Wouldn’t it be great if you could get an image of your choice burnt into a controller? No, it’d be a recipe for nightmare fuel.

So it’s a mercy that Hexgaming only lets you choose from a specific set of images when you order a custom controller through the company’s site. It means that the team putting them together don’t have an picture of Muscle Pikachu murdering Luigi burned into their brains. True, I thought the picture on the Hyper PS4 controller Hexgaming sent me would be a little glossier, but I’m happy with the way it turned out. With purple buttons set into a glowing nebula, there’s no chance anyone will mistake it for their own.

The lack of button symbols might be off-putting to some, but the Hyper isn’t aimed at those who’ve picked up a controller for the first time. You can buy ready-made Hyper controllers, if you’re not fussed about customisation but whatever you do, you’re getting a premium-built controller that’s intended to give you an edge. Hexgaming’s Hyper is meant to be the PS4 equivalent of the Xbox Elite controller, with a price tag to match. So is it worth the price of admission? If eSports are your thing, then yes.

It’s a lot to pay for an advantage – $149.99 minimum – but the Hyper is a great piece of kit. In truth, I’ve always been reluctant to go for third party controllers. Sure, that DoubleShudder 4 controller, the one that’s been gathering dust in the phone shop window, might have looked like a bargain. But I could never shake the suspicion that the insides were filled with brick dust and rusty nails.

The Hyper, with its Xbox One-reminiscent shell and extra buttons, has been constructed from a gutted PS4 controller, so you know you’re getting Sony quality inside. While the Sony logo has been replaced by a knock-off Decepticon logo, the presence of the DualShock internals the motion and touchpad controls work exactly how you’d expect them to.

Certainly, the Hyper was every bit as responsive as Sony’s official, unaltered DualShock 4. And, unlike a lot of third party controllers, you don’t need to plug a receiver into the PS4; it connects in exactly the same manner as a DualShock 4. So no more hunting through drawers for a dongle or having it jut out from your TV stand.

You can swap in domed thumbsticks, or stick with the default textured sticks which feel great to touch. I was concerned that having buttons on the bottom of the controller would feel weird, but your fingers just end resting naturally on them and it’s these buttons that give the Hyper its biggest edge; you can copy any normal button to the four buttons on the underside of the pad.

I tried the Hyper with a range of first-person offline and online shooters, from Bulletstorm to Apex Legends, but what really made me grin was playing Street Fighter IV. Playing Street Fighter with a joypad has always seemed a little off to me – you’re forced to choose which four buttons you want within reach, and which two you have to stretch for. By copying the shoulder buttons to the lower buttons, I had all six attacks within easy reach, making for a superior scrapping experience. 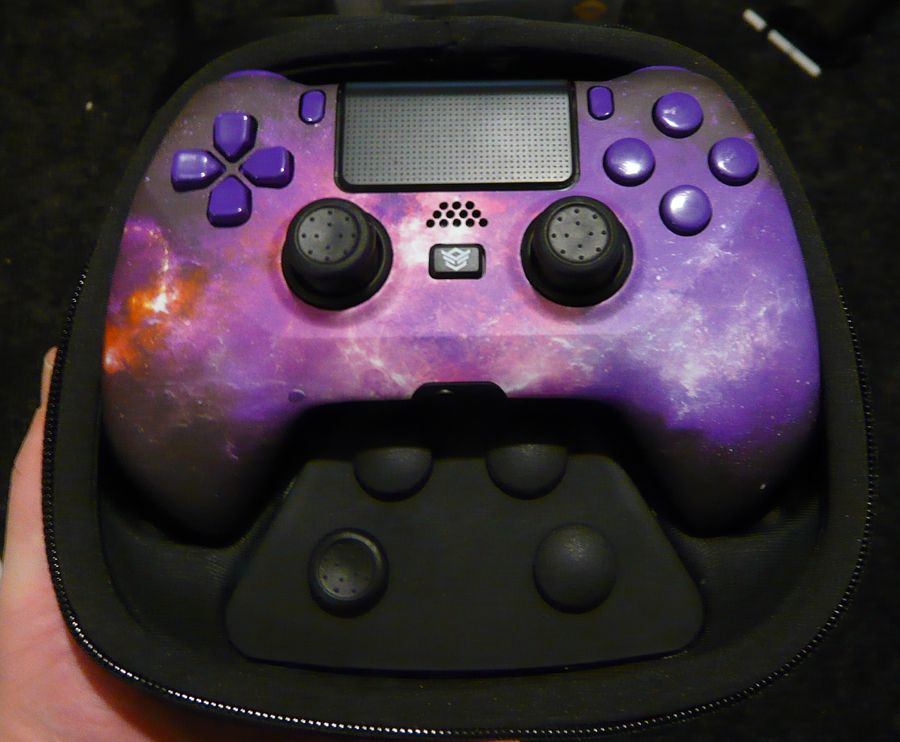 Copying the analogue triggers to a single button doesn’t really work, but there’s another neat feature, again mirroring the Xbox Elite Controller, that lets you shorten the trigger travel distance. I expected, by flipping the switches at the bottom of the controller, there’d be a dead zone at the bottom of the trigger’s travel. But these two switches actually block off half the trigger, making it much so easier to hammer them.

The Hyper comes in a gorgeous box, complete with a clamshell holder, suggesting Hexgaming has put a lot of thought into presentation. But while the PS4 Hyper controller of excellent quality, the same can’t be said of the manual, which is downright confusing in places. It contains a section about cycling LED buttons which is irrelevant since, at the time of writing, no Hyper controllers have LED buttons. And while copying button functions is simple when you know how, divining the actual process proved difficult thanks to what I can only assume is poor translation.

Wonky manual aside, the Hexgaming Hyper is a great piece of kit, worthy of any pro. It was marginally more comfortable to wield than a DualShock 4, and I used the mapped controls (which can be changed on the fly) nearly every time I played. Being able to map “holster weapon” to a single button got me out of more than a few embarrassing situations in Watch Dogs Legion. I certainly wouldn’t be surprised to see the Hyper putting in an appearance at fighting tournaments.

The Hexgaming Hyper will eventually be available through Amazon but, for now, US residents can order a custom or standard controller here.