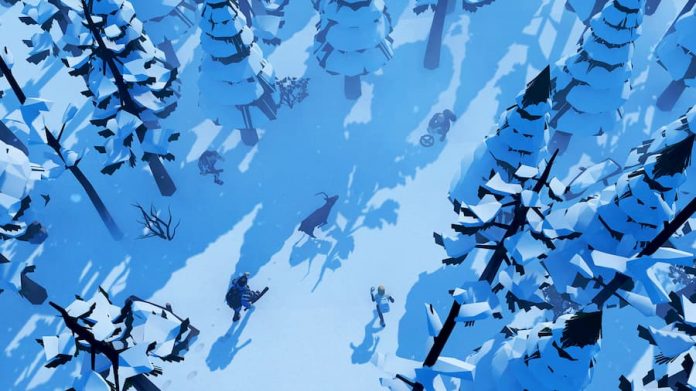 Though it’s been out for a while on PC, The Wild Eight has recently made its way to PS4. And if you’re a fan of survival games, this one should be on your radar.

Your plane has just crashed in the snowy wilderness of Alaska. If you’re playing by yourself, you’re all alone – though you can play in online co-op, giving you some company to brace the wilds with. Whichever way you play though, you’ve got a serious battle for survival on your hands. As if the cold and constant threat of starvation wasn’t enough, The Wild Eight‘s Alaska has some dark secrets waiting for you.

The first threat you’ll face, other than the ever-present battle against the cold, will likely be a wolf. Having a wolf running at you through the woodlands is scary enough, but it’s not too much of a threat. If you have a decent enough weapon, you can likely take it down, scoring yourself some meat in the process. Or you can probably outrun it. Facing a wolf won’t prepare you for the first time you see a werewolf, a zombie, or, even worse, a dark creature from another realm, however.

Yeah – this isn’t your ordinary imagining of Alaska. The result is that The Wild Eight constantly keeps you on your toes, as you’re never quite sure what’s going to be waiting for you around the next corner. That underground bunker you thought would make a great shelter for the night? There’s a werewolf lurking in the next room, so you might want to rethink your plans.

Though simply surviving is key to The Wild Eight, there’s also a story to follow, and a set path of objectives to work towards. You’ll always have an objective, so you’re never simply wandering around aimlessly, going from one berry bush to another. It ensures the game keeps moving forward at a brisk pace, and you’re never stuck for something to do. The story’s pretty enjoyable, too; thanks to a series of underground bunkers and the ever-present feeling of ‘weirdness’, there’s a serious air of LOST here. Just replace the tropical island setting with cold and snowy Alaska. 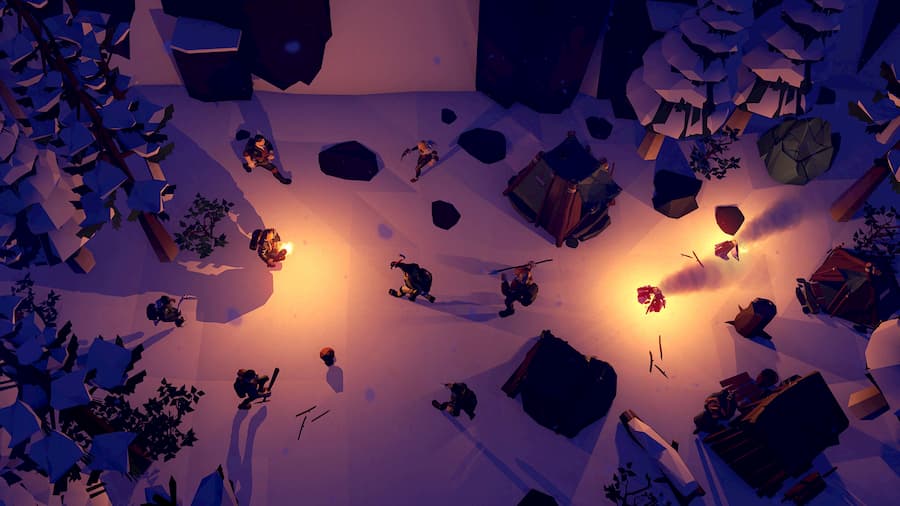 You’ll have to balance your progression through the story alongside your cold and hunger levels, however. Like any survival game, your journey will quickly come to an end if you find yourself too ravenous, or too cold, to continue. And when you’re out and about, your body temperature can drop quickly – especially when a blizzard rolls in. You do have a tent on you at all times, but to use it as shelter you’ll need to always have resources ready. Your best bet is to know where your nearest buildings are, as these always provide protection against the weather.

Resources are rather generous throughout The Wild Eight, so it’s easy enough to get going. You’ll have a basic weapon in no time, and a stash of wood and rock to get you going in the right direction. Food might have to be wild berries to begin with, but you’ll soon uncover buildings with tinned food and rations to keep you going. You’ll also soon discover an abandoned underground shelter, complete with an automated food supply. Find seeds to fill it with, and you’ll have an endless supply of healthy food to eat. It helps, sure, but it doesn’t make The Wild Eight a walk-over. It just gives you one less thing to worry about. 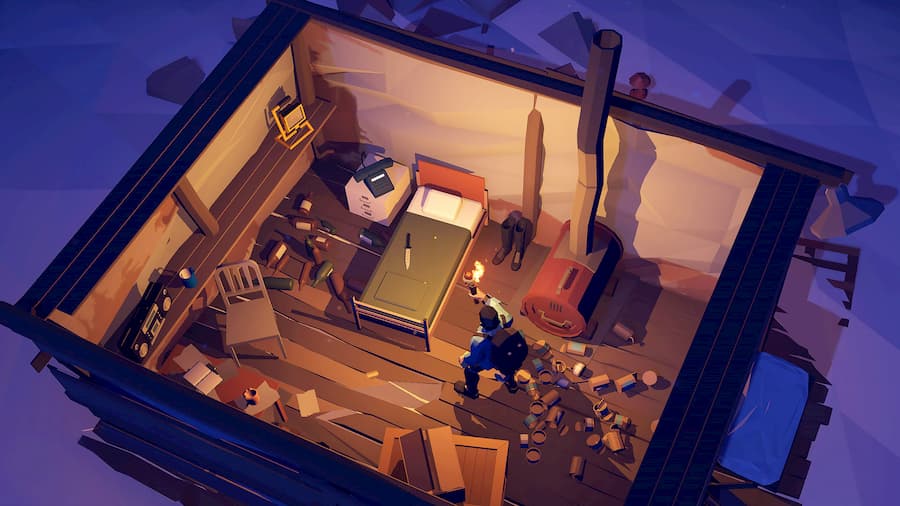 There’s a decent character progression system, with players earning skill points as they play. Walking around will keep adding skill points to your ‘movement’ stat, for example, and engaging in combat will reward you with offense and defence skill points. These have to be spent to be effective, though, and you’ll need to unlock new tiers by using resources. Thankfully that’s not too demanding, and you should be able to increase your character’s hardiness fairly quickly.

There are some annoyances with the game design, however. You can’t sleep to pass time while you’re safe in a shelter, for example. And as exploring at night isn’t the best idea, you’ll likely find yourself twiddling your thumbs or looking at your phone for a few minutes until night passes. The lack of a sleep option is especially strange considering your safe house has perfectly good sofas to nestle down on. Still, at least it means you don’t have to manage your tiredness, which is one less meter to worry about. 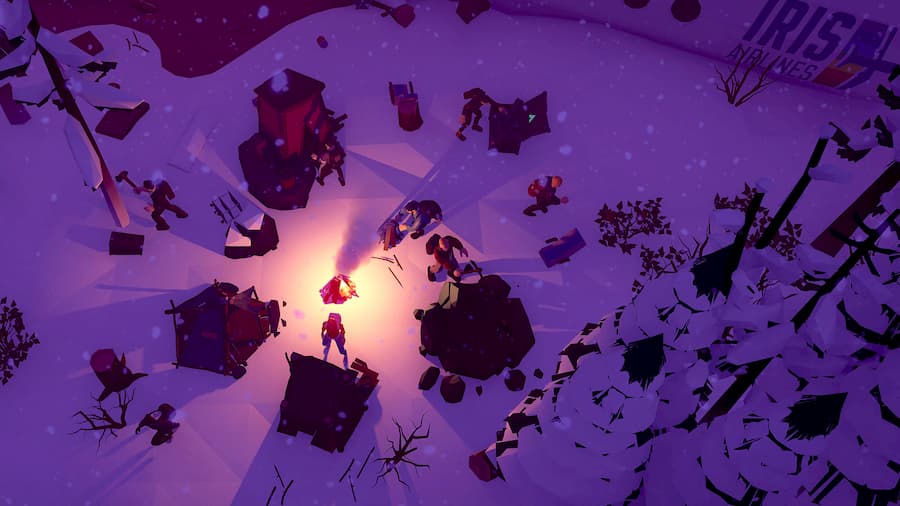 I’ve also encountered a couple of bugs while playing, including climbing down into an area that I couldn’t climb back out of despite it being a fairly small step up. Thankfully the game autosaves, but the current save file left me in the exact area. I had to load up an older save and lost around half an hour’s progress. Not the end of the world, but not ideal.

Niggles aside, though, The Wild Eight deserves praise for being user-friendly. Too often, survival games are filled with dense mechanics that require true commitment to fully master. And while some of The Wild Eight‘s systems could be a bit easier to get to grips with, on the whole it’s an easy game to jump into. That’s not to say it’s easy to master; you’ll find yourself dead in a matter of minutes if you don’t know what you’re doing, but it’s much more welcoming than other games in the genre.

Essentially LOST meets Impact Winter, there’s a lot to love about The Wild Eight. A few bugs and niggles hold it back from being great, but its intriguing story filled with mystery and surprises will keep players hooked. Even when you die (which you likely will), you’ll be keen to jump back in just to find out what waits around the next corner. If you’re a fan of survival games, or looking to dip your toes into the genre, The Wild Eight is worth venturing into.

The Wild Eight is available on PC and PS4. We reviewed the PS4 version of the game (played on PS5) with a code provided by the publisher. 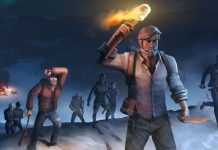 The Wild Eight is bringing co-op survival to Alaska