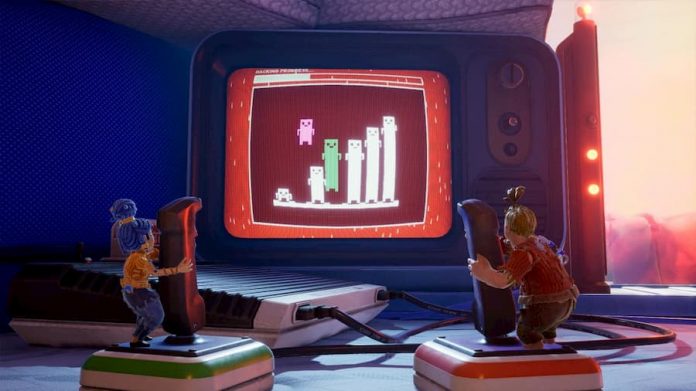 During last night’s Game Awards, Hazelight Studios – the team behind A Way Out – lifted the lid on its next project.

Called It Takes Two, it’s a comedic adventure spanning multiple genres. Like A Way Out before it, It Takes Two is another unique take on co-op play. Once again, it’s strictly co-op, meaning you’ll need a local or online buddy to play with. But as before, one copy of the game will provide a ‘free pass’ for a second player, so you can invite someone else along.

And it looks like it’ll be a journey worth taking. Judging by the trailer, which you can see at the bottom of this post, It Takes Two is a gorgeous and quirky adventure. In it, you take control of Cody and May, a human couple that somehow find themselves turned into miniature dolls. Quite a predicament to be in, it turns out. The key to them being turned back into humans? Working together and saving their failing relationship.

Packed with funny dialogue and ridiculous gameplay sequences, it looks to be a lot of fun – but its subject matter could also be a surprisingly touching one. While the story centres on Cody and May’s relationship, it looks like gameplay will test the relationship of you and your co-op companion; you’ll need to work together, utilising each character’s individual skills to progress through the game.

We love a good co-op adventure, so needless to say we’re very excited to see how this one turns out. If it’s even half as good as A Way Out, we’re in for a treat.

Watch the trailer below. It Takes Two is coming to PS4, PS5, Xbox One, Xbox Series X/S and PC on 26th March.