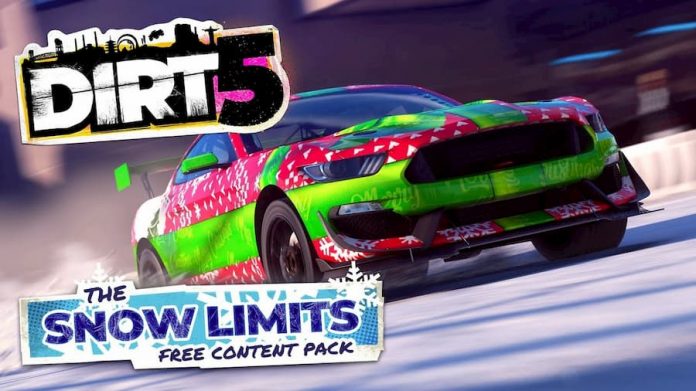 I didn’t know wheels needed support. I’m going to be much nicer to mine in future.

Well, that was a terrible joke now, wasn’t it? Are you still here? Good, because I promise there is some news to be had. Codemasters has been hard at work with DIRT 5 since its release last month. Its latest patch, update 2.00, adds an array of content, bug fixes and extra support.

This new update – which is available now on PC, PS5 and PS4 with Xbox platforms following in the next couple of days – adds a new ‘Snow Limits’ content pack, steering wheel support and a host of optimisations.

The Snow Limits content adds new Playgrounds items, liveries, an Ice Breaker circuit, and new customisation items to the game. It also adds the option to add beautiful Snowy conditions in Playgrounds. In the trailer below you can also see a few of the game’s vehicles sporting some festive red and green paint jobs as well.

As for steering wheel support, most modern wheel peripherals are now supported by DIRT 4, including the latest models from Thrustmaster and Logitech. It also means that all compatible Xbox One and PS4 wheels are now functional on Xbox Series X/S and PS5.

As mentioned, this update also includes bug fixes and optimisations to help improve the game on all platforms and improve online matchmaking. You can read DIRT 5‘s full Update 2.00 patch notes on the official website.

Check out the trailer for the Snow Limits free update below.