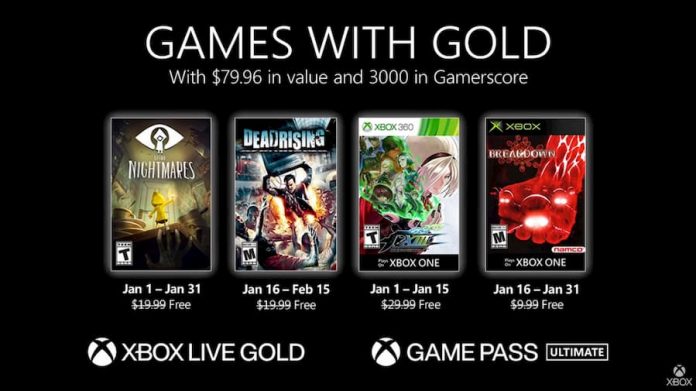 Microsoft have announced January’s Games With Gold and the line-up’s pretty awesome.

Let’s face it, both Xbox’s Games With Gold and Sony’s Playstation Plus offerings have been a bit of a mixed bag. It’s like unwrapping a Christmas present; sometimes you get a chocolate bar the size of a small country, other times you’re greeted by a bottle of aftershave that’s been regifted so often the fingerprints are etched into the glass.

But this January, Xbox Gold subscribers get to stuff their faces with lovely, lovely chocolate. There are a total of four games on offer, which are:

The Capcom-published Breakdown isn’t as well known as the other titles, but it’s definitely worth a play, resembling a mash-up of Resident Evil and Def Jam Vendetta. Little Nightmares and King of Fighters XIII are also excellent though, for us, the pick of the bundle has to be the remastered version of Dead Rising, originally an Xbox 360 title.

Dead Rising 3 may have made our list of Best Zombie Games on Xbox One but the original still shines, dropping you (as reporter Frank West) into a massive zombie-filled shopping mall and leaving you to fend for yourself. Virtually anything you can pick up can be used as a weapon or hurled at a zombie, even if the results are less than spectacular. It’s far superior to the Christmas-themed Dead Rising 4, which stripped out a lot of the original’s fun factor.

You need to be a subscriber to Xbox Gold (or Xbox Games Pass Ultimate) in order to get these but as long as you remain a subscriber you can play them any time. If you let your subscription lapse, but resubscribe later, you can also download them again later, as long as you added them to your account when you were a subscriber. You will have to wait till Jan 16th to claim Dead Rising but you can’t go wrong with Frank West. He’s covered wars, you know.

Get Xbox Gold at CDKeys