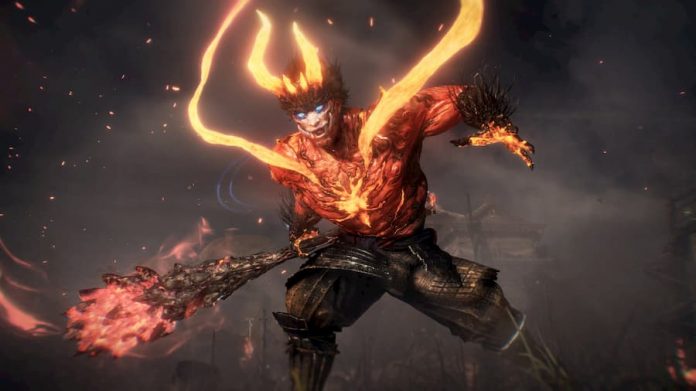 Revisit Nioh 2 all in one package in The Complete Edition.

The Complete Edition of this beloved title has players jumping into the story as a half-human, half-yokai character. Players are able to customise the character any way they want. You start in the Mino province where you meet with a merchant named Tokichiro who helps you in controlling your yokai powers. You decide to set off together on an epic adventure in a classic best friend road trip style. Okay, maybe not quite like that.

Once players finish the main campaign they’ll be able to immediately jump into the three DLC expansion packs: The Tengu’s Disciple, Darkness in the Capital, and The First Samurai. Along with expanding the narrative, each DLC pack gives the player new weaponry and armour, and introduces new enemies.

Before they even start the game, players will be faced with a choice. Which of the 16 different weapons types will they choose? First introduced in the DLC, the Splitstaff and the Fists will now be available from the outset of the games. They’ll join the Swords, Dual Swords, Spears, Switchglaives, Axes & Hammers, Kusarigamas, Odachis, Tonfas, Hatchets, Bows, Hand Cannons, Rifles, Yokai Weapons and Blessed Weapons. Phew. That’s a lot of choice. Each weapon has its own skill tree to really cater to the player’s playstyle.

Nioh 2 – The Complete Edition is set to release on February 5th 2021 for PC via Steam. Look out for more information as it gets closer to release.