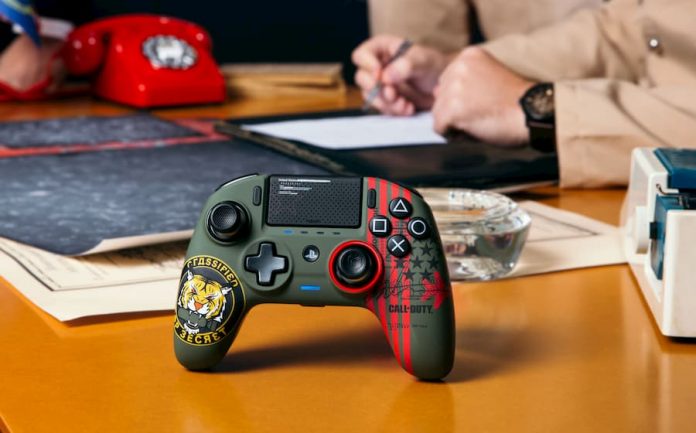 Nacon’s Revolution Unlimited Pro range of controllers are Pro by name, and pro by nature.

Essentially an Elite controller but for PS4, they’ve been designed to offer a truly quality gamepad experience. Like Microsoft’s Elite controller, they have programmable buttons on the reverse and multiple settings, allowing you to create your own pre-set button mappings.

Aside from the extra bells and whistles, though, the Revolution Unlimited Pro is simply an extremely well-made controller. It’s of a seriously high standard, with buttons and thumbsticks that are a pleasure to push. It can be used wirelessly or wired, and it comes presented in a very nice carry case to keep it safe.

The latest controller to enter Nacon’s Revolution Unlimited Pro line-up, joining the plain black and grey camo models, is a Call of Duty edition. Released last month to coincide with the release of Call of Duty: Black Ops – Cold War, it sports a beautiful design that any Call of Duty fan will love. Heck, even if you’re not a huge CoD lover, it’s hard not to be drawn in with its striking design. The controller itself is in an army-green colour; the right-hand side sports a stars-and-stripes design, and the left side has a tiger motif. Even the touchpad is printed with a design. Altogether, it looks fantastic.

Its carry case is uniquely designed too; no longer is it plain black, replaced instead with a green camo pattern. As a further extra touch, it comes bundled with a code for bonus content in the game, too. 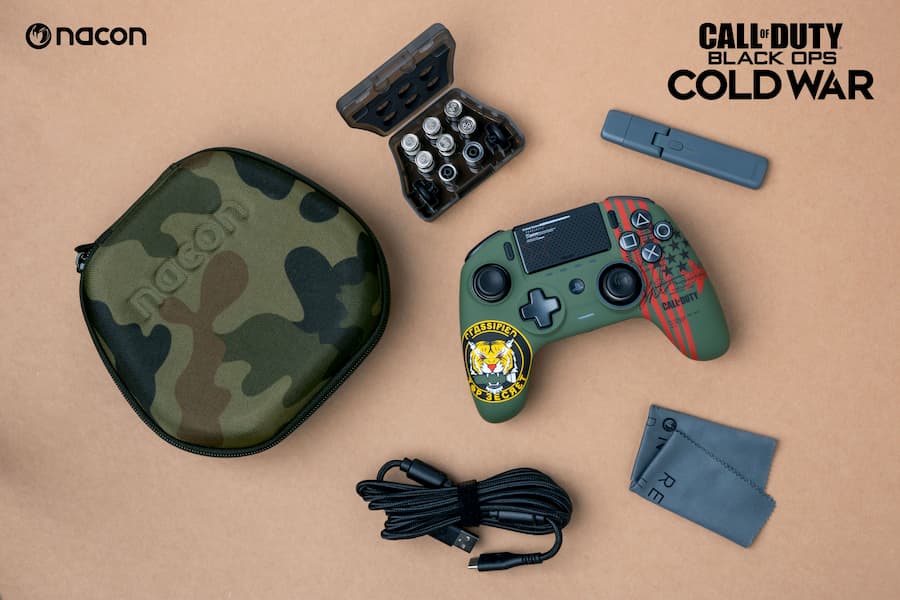 But why should you choose a Nacon Revolution Unlimited Pro controller over your standard DualShock 4? Well, aside from the premium feel, the thumbstick positioning will appeal to some. It ditches Sony’s standard layout that sees both thumbsticks at the bottom and instead opts for a layout more familiar to Xbox players. The left thumbstick and d-pad have been swapped over, offering a much more ergonomic layout.

Where the controller’s design falters somewhat compared to Microsoft’s Elite controller is in its customisable elements. While the Xbox Elite controller has a couple of different d-pads and back paddles that can be removed, the Revolution Unlimited Pro only has a change of thumbsticks. But since the default pair – made of hard-wearing plastic with a slight indentation for your thumbs – is so comfortable to use, it’s not really an issue. It is a shame there isn’t an interchangeable d-pad though; it would be nice to have the option to go for a circular design.

Instead of paddles on the back of the controller, the Nacon Revolution Unlimited Pro has four buttons, two on each grip. They’re flush to the controller, which feels like a much better design choice than paddles, which are too easy to press by accident. The Revolution’s back buttons are not at all intrusive, so if you don’t want to use them you won’t know they’re there. 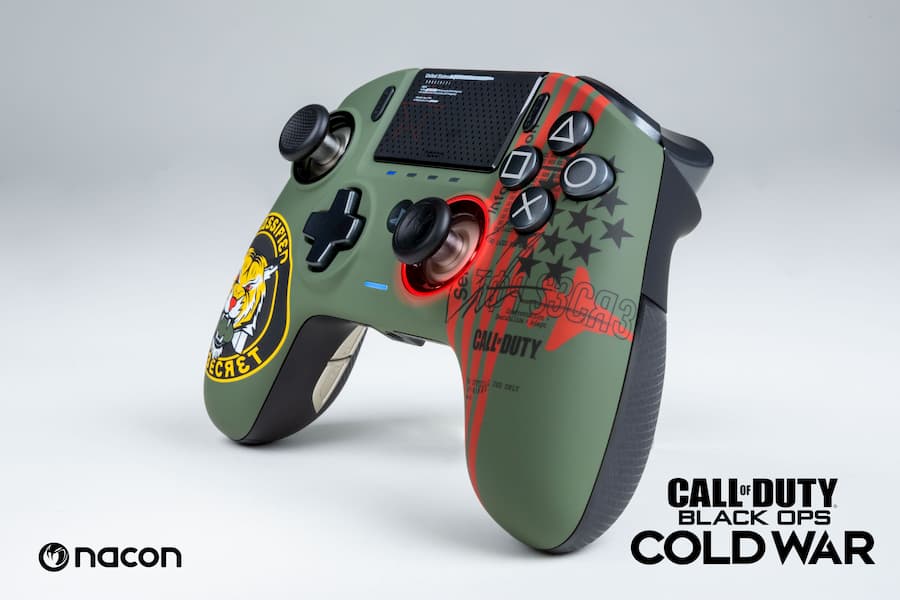 In all other regards, the Nacon Revolution Unlimited Pro is a joy to use. It’s comfortable and ergonomic, and thanks to a textured grip, it feels nice in your hands. You can even adjust the weight of the controller to suit. As standard, it’s fairly light, a little heavier than a DualShock 4 but much lighter than an Xbox controller. But it comes bundled with a set of weights, allowing you to add up to 80g of extra heft. If you prefer a controller to feel more substantial in your grip, then you can simply slide off the grips and add extra weight.

If you want to use the controller wired, it comes bundled with a high-quality braided cable, allowing you to connect directly to your console’s USB port. But it can be used wirelessly too. You simply need to plug the included dongle into a spare USB port, and the controller will connect automatically. It works flawlessly, but there’s one downside: you can’t turn on your console by using the ‘PS’ button on the controller. It’s hardly a deal-breaker, though.

The battery for wireless play doesn’t last perhaps as long as a standard PS4 controller – you’ll get around seven hours of play out if it. But considering the extra functionality of the controller – including a funky LED light around the right analogue stick – it’s not too surprising. If you have to use it wired, it’s certainly not too much of an issue since the included cable is three metres long. And it’ll charge while you play.

What might be a deal-breaker for some, however, is the fact that the Nacon Revolution Unlimited Pro is a PS4 controller. And, of course, we’re now living in an age where the PS5 exists and is out in the wild. You can use PS4 controllers on PS5 – and the Unlimited Pro connects just as easily as it does to a PS4 – but only to play PS4 games. The same is true of the DualShock 4; it’s a criticism of the console rather than Nacon’s controller. But it also means if you have a PS5, your usage of the Nacon Revolution Unlimited Pro will be limited. 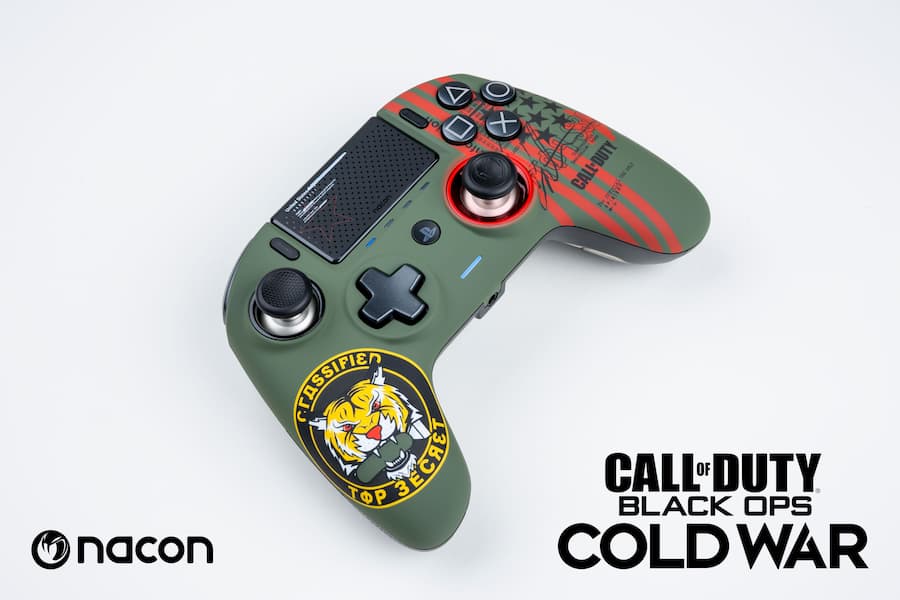 That’s more of a problem considering the controller’s price. Its RRP is €180/£170, which is a considerable amount of money for a controller for what’s now a last-generation console. It’s made worse by the fact that the original black Nacon Revolution Unlimited Pro, first released early in 2019, can now be picked up for around £110. It’s quite the saving considering that it’s exactly the same controller, minus the fancy design. As gorgeous as the Call of Duty design is, it absolutely doesn’t warrant paying an extra £60 for.

If you’re still a PS4 gamer and don’t have plans to upgrade to a PS5 any time soon, then the Nacon Revolution Unlimited Pro is a worthwhile purchase. If money’s no object, splash out on the Call of Duty edition; it really is gorgeous. But considering it has the same insides, it’s really not worth forking out the extra for. It’s the nicest PS4 controller we’ve ever used, hands down. Once you’ve tried it, it’s hard to go back to a standard Dualshock.

However, if you’ve already upgraded to PS5, it’s a slightly different story. The fact you can’t use PS4 controllers on PS5 games instantly limits the functionality of the Nacon Revolution Unlimited Pro. And even if you could use it on PS5 games, it can’t compete with the brand new DualSense in terms of functionality. We are looking forward to seeing what Nacon come up with for PS5, though.

The Nacon Revolution Unlimited Pro Controller is available to purchase from select retailers in Europe, Middle East, Oceania and Russia.