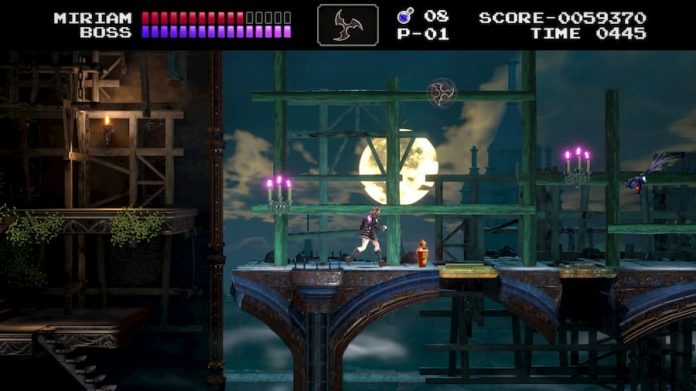 Start a new throwback experience in Bloodstained: Ritual of the Night.

Publisher 505 Games and ArtPlay continue to add new content to the Metroidvania action-RPG Bloodstained: Ritual of the Night. This time around, there are two new things for players to jump into: Classic Mode and a Kingdom Crossover.

In Classic Mode, players guide protagonist Miriam through an 8-bit world. She is equipped with only a sword-whip to take on whatever awaits her inside of the demonic castle. Players will be faced with five stages and five bosses. When players complete Classic mode they’ll be graded on how well they did.

Additionally, an exciting crossover is now live in the game. Last year, Miriam, Zangetsu, Gebel and Alfred were added as playable characters in Kingdom: Two Crowns. Now, the publishers have teamed up again to bring Kingdom: Two Crowns into Bloodstained. When players add the crossover content to their game they’ll find a brand new area. The new area has been created with modern pixel art reminiscent of Kingdom. Players will fight a new boss as well as some new equipment, the Crown Head Gear, which reduces damage at the cost of gold.

The team behind Bloodstained: Ritual of the Night promises to continue to add more content like this to the game in 2021.

The Classic Mode and Kingdom: Two Crowns crossover features are available today on PlayStation 4, Xbox One, PC and Nintendo Switch for free to anyone that owns the base game.

Buy Bloodstained: Ritual of the Night on Amazon