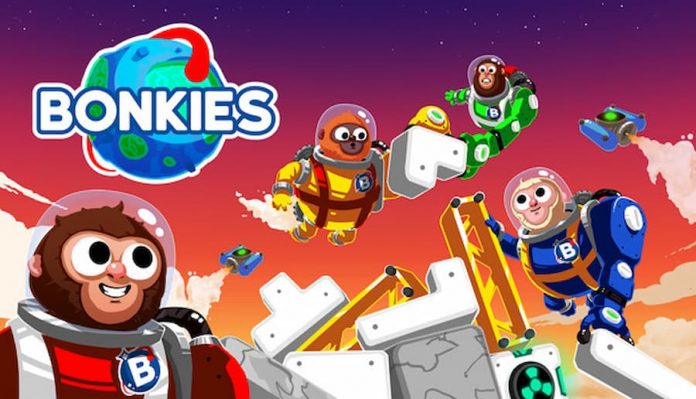 Honestly, monkeys are smarter than all of us, we’ve just got to face it.

They are beautiful, majestic animals that we tend to keep in zoos. Really, it should be the other way around. But, alas, seeing as monkeys and apes are the superior creature, they often find themselves in situations like the animals in Bonkies, a co-op puzzle game from developer Studio Gauntlet. In the game you play as animal astronauts as you work to build fantastic machinery and buildings in space.

There isn’t a whole lot of story involved in Bonkies. Essentially, you and your group of friends are hired to build new structures in space. Each one of you is equipped with one giant robot arm that can lift very heavy bits of material. You also have jetpacks to help you lift especially heavy items. Sometimes items are so heavy you’ll need to have a teammate or two to help you move them to an appropriate spot.

Each of the game’s level has an outlined area that you’re meant to fill with the designated material. Material, which comes in different forms like metal or glass, comes from a conveyor belt on the left and right side of the level area. However, Bonkies doesn’t indicate how all the pieces of material go together. That’s up to you and your teammates to figure out. You must work together using your powerful arms to place pieces together to form the outlined shape. It’s a little like co-op Tangrams.

Bonkies features a number of different locations, like the moon and Mars, and each planet has a variety of levels for you to complete. Completing a level with a fast time earns you a banana, which you can then use to unlock new characters. In the beginning, you’ll be tasked with building easy shapes, typically squares and rectangles; things that are easy to make using smaller squares and rectangles. Unfortunately, the difficulty ramps up pretty quickly. By the third world, my friend and I were screaming bloody murder after restarting a certain level where we had to balance a bunch of blocks on top of round pieces for the third time. (Picture trying to build a car on top of wheels that are constantly rolling away…) 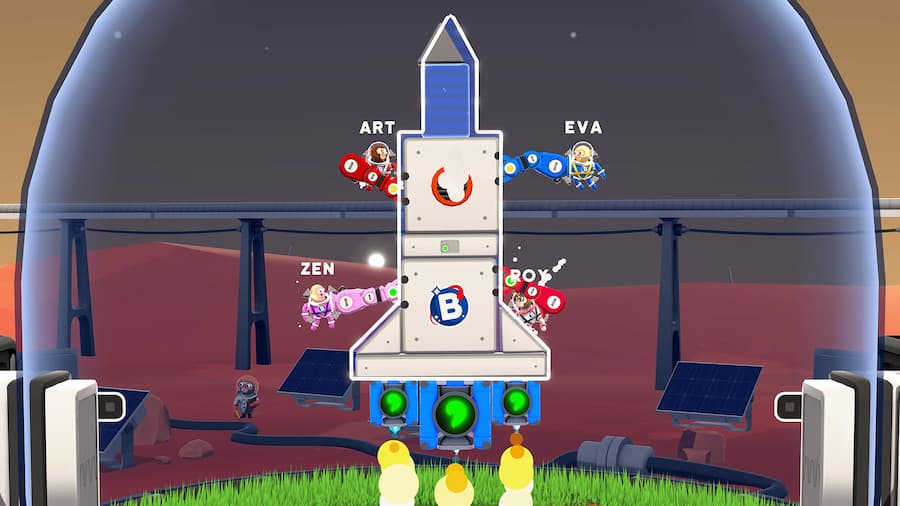 It’s designed to be played in co-op, but you can tackle it solo if you wish. It’s not the ideal way to play though, and it’s infinitely more enjoyable if you have friends over to tackle it with. Sadly, it’s local co-op only; you can’t take the action online. If you’re playing on Steam, though, you can make use of Remote Play, which allows you to stream and share your game. I played with my friends this way, and it worked perfectly.

Working as a team to piece together increasingly complex shapes is one thing, but Bonkies‘ most difficult hurdle comes from its space setting: there’s a lack of gravity. Objects move and drift when nudge them, so you have to be very careful when placing blocks. You also have to perhaps a little too precise at times; you might have the perfect build that’s just ever so slightly outside of the lines, and you’ll not be given credit for it. It’s frustrating, especially when you’ll sometimes need to start your build over as a result.

As you progress through Bonkies, you’ll be introduced to new elements. Scaffolding is one such addition; you’ll need to use it to aid your build, but it doesn’t count towards the final product. You’ll also meet the magnetic block and the dreaded rocket block, both of which add a new level of complexity to the game. The rocket block in particular is the bane of my existence: tapping it activates a powerful rocket that pushes the block in the opposite direction. Tapping it again will turn off the rocket. For the most part, I appreciated new elements being added to levels – they help keep Bonkies‘ gameplay fresh and interesting – but the rocket block quickly become too much to deal with. 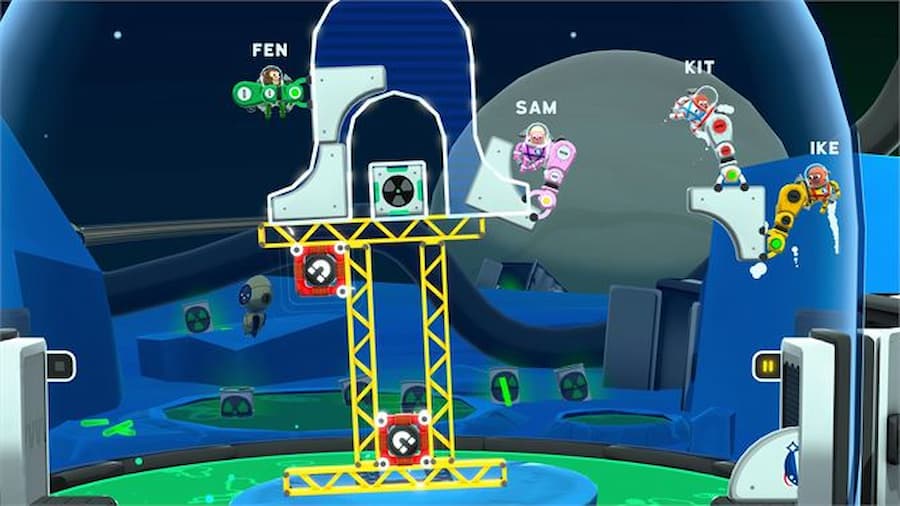 Frustrations with inanimate objects aside, Bonkies’ art style and character design is fantastic. You start out with just a few monkeys to choose from as playable characters, but as you progress you’ll meet more adorable animals, including a koala and a dog (who gets happy if you pat him on the head). Seeing which animals would pop up next quickly become a highlight of the game.

I think my co-op partner said it best: “I hate it, but I want to play more of it”. Bonkies can be infuriating and difficult, but it’s also hysterical and a lot of fun, especially if you’re playing with friends. If you’re looking for a new couch co-op title to play that’ll encourage you to work together and exercise your brain matter, Bonkies is well worth a try.

Bonkies is available digitally on PC, PS4, Xbox One and Switch. We reviewed the game on PC with a code provided by the publisher. 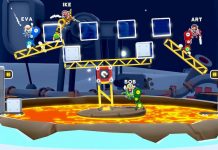 Monkey Around in Party Game Bonkies, Coming in Early 2021