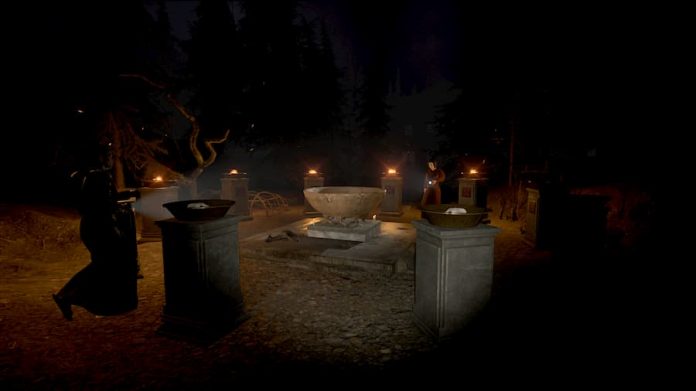 Devour, a co-op horror game that sees you and up to three other players battling a cult leader, is hitting Steam at the end of January.

It’s a prequel to The Watchers, developer Straight Back’s previous co-op horror title, but it looks set to be more of a bite-sized experience, with matches lasting up to an hour. You have to foil cult leader Anna Puerta, who’s become possessed by an evil goat demon. Don’t you just hate it when that happens.

You can, apparently, play the game solo, though you’ll be missing out on your fellow players’ screams. Unlike Dead by Daylight, where one player is after blood, you’re all in the same blood-encrusted boat. Victory is achieved by gathering gasoline and setting fire to sacrificial goats; think Slender: The Eight Pages but with more potential PETA outrage. All the while, Big Bad Anna is trying to divorce your heads from your respective shoulders.

The developers claim “you’ll need a focused team and perfect execution” to succeed which should be interesting when you’re playing with random participants. As much as we enjoyed playing Back 4 Blood’s Closed Alpha, we ran into a few people who’d just make a break for it as soon as the game started. What happens in Devour if one of your teammates decides to go it alone? Will they get the whole team killed?

You can find out when Devour is released on PC this January 28th and wishlist it right now.

Get a Steam Top Up at CDKeys