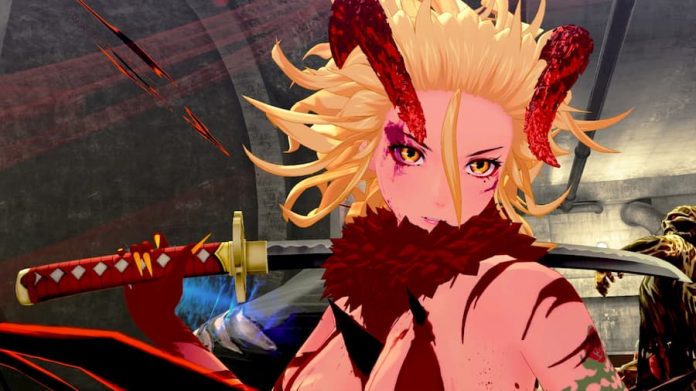 Despite being around since 2004, you might not have ever heard of the OneeChanbara series.

That’s mainly because many entries in the series haven’t been localised for the west, and in the cases where they were, they’ve been renamed to make them a little more saleable. So, if you had a PS2 and played Zombie Zone, Zombie Hunters, or Zombie Hunters 2, you’ve actually played a OneeChanbara game.

After the PS2 era, all that’s seemingly been necessary to make the OneeChanbara series more palatable to the West is dropping an E from its name and leaning further on its sex appeal, with Onechanbara: Bikini Samurai Squad, Onechanbara: Bikini Zombie Slayers and Onechanbara: Z2 Chaos released on a smattering of formats. But it doesn’t matter if you’re familiar with OneeChanbara or not when it comes to its latest release, Onee Chanbara Origin; it’s essentially a remake of the first two titles rolled into one. And if you’re a fan of old-fashioned action games and exploitation films, you’ll get along rather swimmingly with it.

Jumping into Onee Chanbara Origin‘s story mode, you’ll initially only be able to take control of Aya – a bikini-clad, sword-wielding woman who’s hell-bent on destroying zombies in order to be reunited with her father and sister who disappeared some time ago. As you can imagine, the camera likes to linger on her chest a lot during cutscenes, because sex sells. Some will no doubt enjoy the titillation, but most are likely to find it disrespectful, distasteful, and a bit embarrassing. What you will appreciate about Aya, however – and indeed all the character models in the game – is their cel-shaded appearance. While environments can feel a little empty and repetitive, developer Tamsoft has done a great job of revitalising the series’ characters, bringing them bang up to date.

Unfortunately, the gameplay has its feet planted firmly in the past – though that’s not to say that it’s bad, just simple. In any given chapter, multiple waves of the undead are thrown at you as you explore small environments, and it’s your task to obliterate them in style. Your standard attack button can be mashed to perform an easy combo, or pressed with finesse to make it a Cool combo and inflict even more damage. There’s also a special attack button which serves to add a bit of variety to your attacks and also help stun enemies a little bit quicker. When an enemy is stunned, you can perform a Cool Finish, instantly finishing or at least heavily damaging most enemies. There’s more to Onee Chanbara Origin‘s combat system, too, like a duo of powered-up states that kick into effect as your character gets increasingly stained with blood. 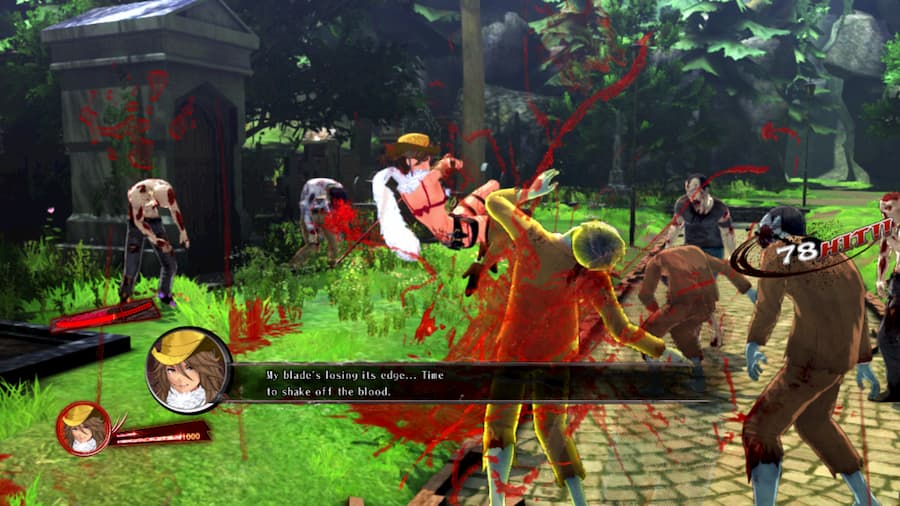 It’s easy to write off Onee Chanbara Origin as a mindless hack-and-slash affair after playing only its opening few chapters on normal difficulty. But if you delve in a little further, or increase the difficulty, you’ll find there’s some depth to it. As mentioned earlier, carefully timing your button presses rather than just tapping like a maniac can result in a Cool combo, causing more damage. Then there’s the fact that as your weapon gets covered in blood it does less damage, forcing you to think about cleaning it while you’re getting stuck in. Also, when it comes to taking on tougher enemies and indeed bosses, it pays to learn when to dodge and when to parry. Both are rewarding to pull off, and present you with a much-needed window to get some hits in.

Thanks to working in some light RPG elements, you’re given the chance to power up Aya as you make your way through the game, while money earned can be used to either buy equippable rings that offer a range of benefits, or consumable items to give you a momentary boost in combat. A second playable character is also unlocked as you make your way through story mode, as well as secondary weapons for each character, adding yet more combat variety. Being able to instantly switch between weapons and characters with the simple press of a button is also rather neat. Story mode is ultimately pretty short though; you’ll likely blast through it in around five or six hours on normal difficulty. Those who wish to get all of the game’s achievements/trophies will need to play through it on hard, however, as well as two further unlockable difficulties that raise the challenge even further. 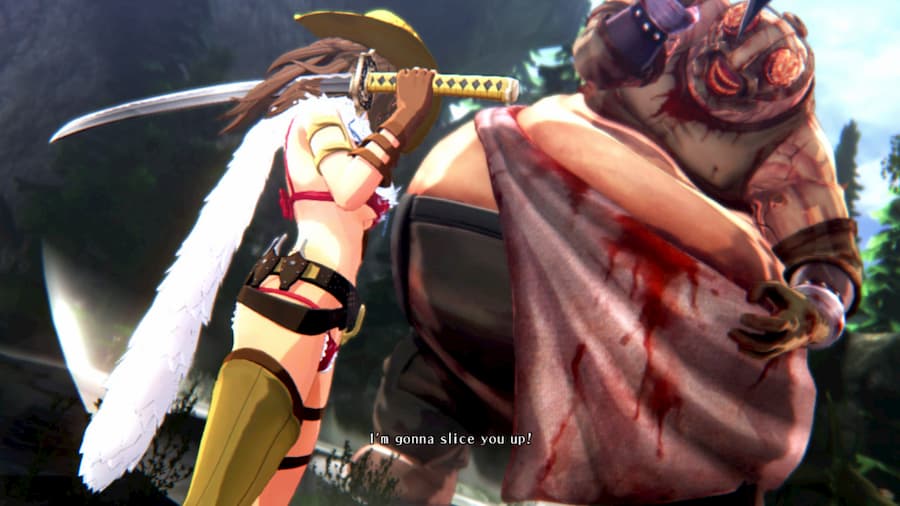 Aside from story mode, all that remains to Onee Chanbara Origin, unless you purchase additional content, is an unlockable Infinite Survival mode. This tasks players with surviving as many waves of enemies as they can, each one more fearsome that the last. It’s perhaps the best place to power up your characters, and provides some cathartic fun – there’s even a third character to unlock if you can make it far enough. On the whole though, you can’t help but feel that Onee Chanbara Origin is a bit light on content for its asking price. Throw in a camera that occasionally fails to give you a sufficient view, especially when locked onto a boss, and you have a game that pretty much entertains throughout but never truly impresses.

Onee Chanbara Origin is what it is: a remake of a couple of simple and repetitive action games that largely rely on titillation and buckets of gore to keep players’ eyes glued to the screen. Dig beneath its shallow exterior, however, and you’ll find a combat system that’s surprisingly rewarding when the camera isn’t working against you. It’s just a shame that there’s not much content to it. It’s hard to recommend Onee Chanbara Origin at its full price unless you’re really keen to hack and slash zombies as a bikini-clad badass. When that price drops a little, though, it’s worth jumping on if action games are your thing.

Onee Chanbara Origin is available on PS4 and PC. We reviewed the PS4 version on a PS5 with a code provided by the game’s publisher. 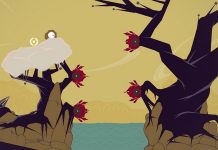 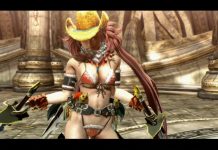 Onechanbara Z2: Chaos to be released in Europe