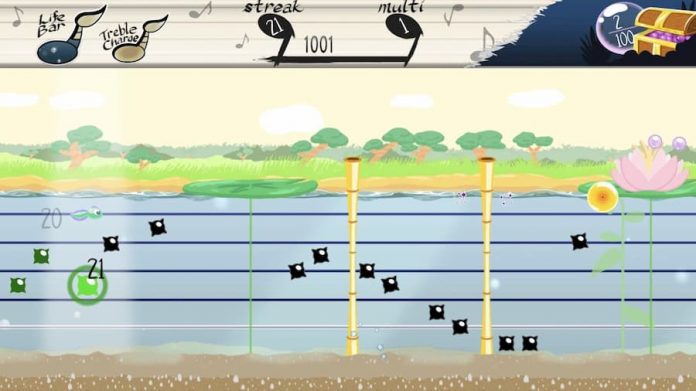 Tadpole Treble, a rhythm game last seen on the Wii U, is getting a Nintendo Switch re-release in the shape of Tadpole Treble Encore.

Haven’t we always said there should be more tadpole-based games? Actually, no, we haven’t. But the upcoming release of Tadpole Treble Encore has brought back fond memories of playing Savage Pond on the Acorn Electron, and we’re all ready to dive back into the algae-munching life.

But rather than making you a tiny tadpole in a tiny single-screen pond, Tadpole Treble Encore has you swimming horizontally across your Switch’s display, avoiding hazards and activating musical notes. The original Tadpole Treble was spawned by the creator Brawl in the Family, along with his brother, and released on the PC and Wii U. Encore is a Nintendo Switch re-release of the game, sporting a bunch of new features including a director’s commentary.

We didn’t review the original game but it received a great deal of praise so we’re looking forward to taking a look at it this time around. The art style alone has piqued our interest and it seems a preferable alternative to just shoving a bunch of tadpoles in a jar, forgetting about them, and wondering why there’s only one tadpole left a few weeks later.

Tadpole Treble Encore will swim onto the Nintendo Switch this January 21st. Until then, you can check out the trailer below: