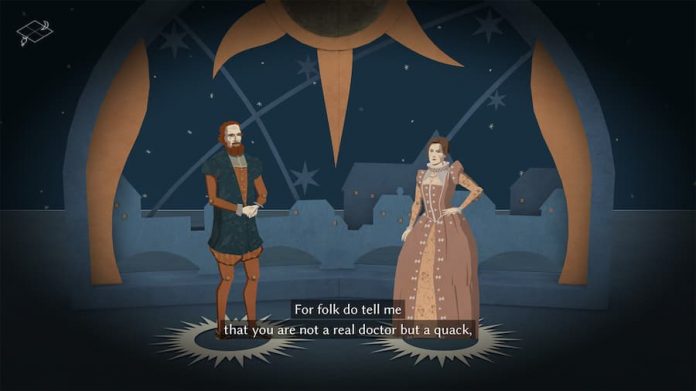 Ah, the stars. The greatest doctors of our time.

Not really, but that’s certainly what Astrologaster‘s Doctor Simon Forman believes. A “Doctor of Astrology, Astronomy and Psysick”, Simon uses the stars to diagnose his patients. There’s no shame in it; set during the Shakespearean era, his patients don’t know any better. What better way to cure the plague than by reading the stars and having them tell you what to do?

Astrologaster is a story-rich game that plays a bit like a choose-your-own-adventure novel with a 1590s twist. You play as Simon – who was actually a real person from 16th century London – as he diagnoses patients with various illnesses and gives advice in general using, of all things, the stars to guide him.

For example, one of your very first patients will complain of involuntary upward purging and a headache. The stars will suggest that she is pregnant and thus that is what you will diagnose her with. Did Simon really use the stars to determine this diagnosis or did he simply listen to the patient’s complaints and infer? That is very much up to your interpretation.

The entire story of Astrologaster takes place inside of a storybook. The player flips between each of the pages, and different events happen on each page. On one page you might have Simon diagnosing his patients, and on the next you’ll be reading a newsletter about how much of the community believes that he should not be able to practice medicine due to, you know, him not actually having a medical license. Simon doesn’t see the problem. Flip again and you’ll be greeted by a full choir of singers narrating the next patient come to see the good doctor. Each verse from the choir is brilliantly flippant and clever. 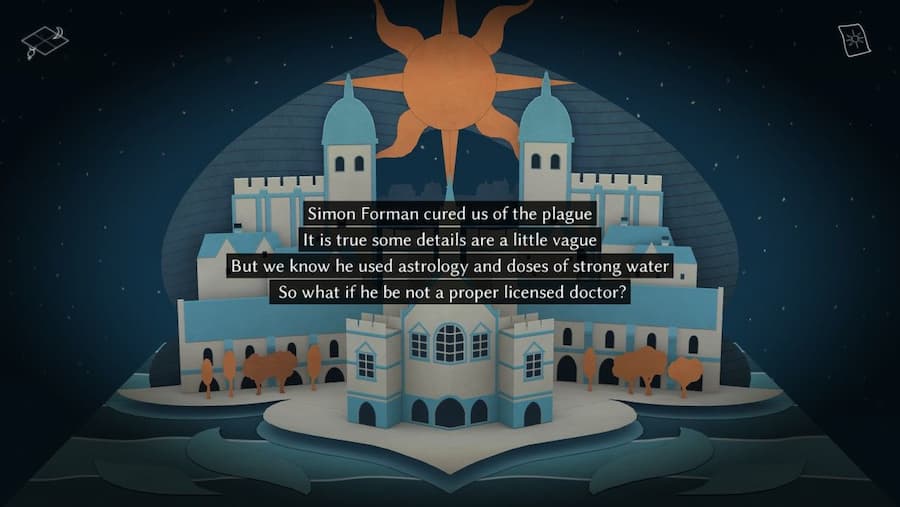 While Simon believes himself to be a legitimate doctor, much of the town disagrees. And that’s where Astrologaster‘s main conflict comes into play. Simon hopes that by having a successful relationship with his patients they might write him a “letter of recommendation” which will prove to the naysayers that he is a legitimate doctor with just as much standing as those who actually studied medicine. As the player, by giving patients positive readings and the answers they’re looking for, you’ll get that much closer to achieving those letters of recommendation that you need.

Unfortunately, the only real gameplay elements aren’t that important. For most of the game, you’ll simply reading or listening to lines of dialogue. The only part of Astrologaster that players interact with is the star readings, which are very simple. During each of the readings you have to choose from a few different constellations. The interpretation of these constellations is written at the top of the screen so you don’t have to bother interpreting them yourself. You simply choose which option you think the patient will be most happy with and the story continues from there. 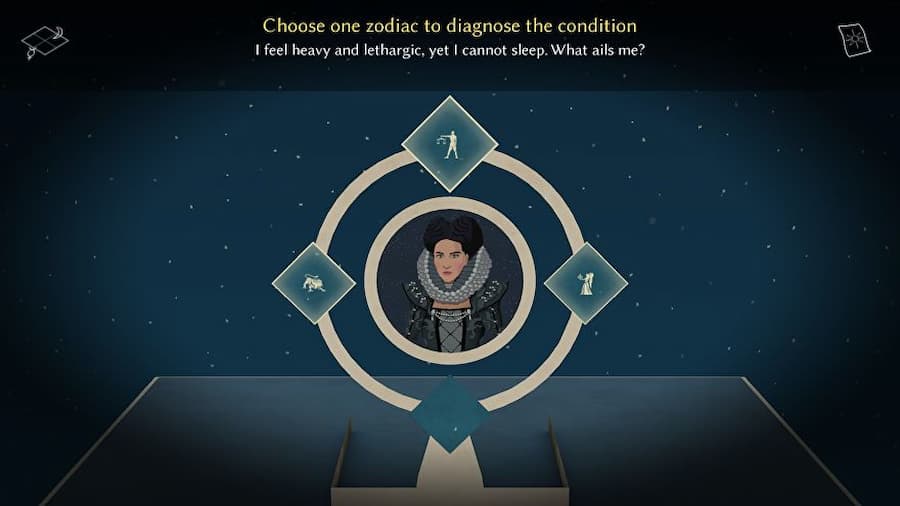 Making bad choices, or choices that your patient isn’t happy with, doesn’t affect you that negatively either. While your letter of recommendation score with them might go down, they’ll be back to speak with you again and ask your advice. The lack of any real consequence – and in turn, no motivation to pick the right answer – really hinders the gameplay.

On the bright side, Astrologaster is very funny and incredibly clever. The dialogue is brilliantly written, and its delivery via a cast of talented voice actors is delightful. The characters feel alive; as though they’ve just jumped out of a history book – and some of them have. The addition of the choir to narrate, plus the Shakespearean dialogue makes this title very enjoyable, especially for history buffs. You’ll likely find yourself flipping quickly through its storybook pages to see what’s coming next.

Despite its lack of real consequences, Astrologaster is a lot of fun to play; the excellent writing and top-notch voice acting really bring this ridiculous concept to life. Yes, it’s a shame the player’s actions don’t make more of a difference, but Astrologaster is still worth going along with – especially if you want a unique look at 16th century London.

Astrologaster is available on PC and Switch. We reviewed the Switch version with a code provided by the publisher.