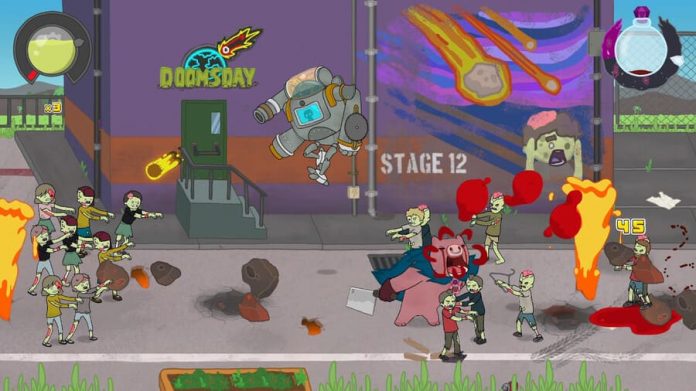 Is MechaNika, the seven year old star of this side-scrolling beat ’em up (star of a previous game) actually roaming around town in a giant robot, murdering everyone in her path? Or is she sitting at home in a cardboard box, imagining what it’d be like to dismember, electrocute or mow down everyone she sets her eyes on? When you get past the so-so tutorial level, though, you’ll be so engrossed by Colossus Down‘s mayhem that you won’t have time to ponder the reality of MechaNika’s world.

Aside from the odd platform section, you’ll spend most of your time brawling your way through oncoming enemies ranging from police officers and workmen in bulldozers, all the way through to zombies and Care Bears.

What sets Colossus Down apart from your average brawler – apart from the absolutely magnificent animation and art direction – is that blocking is fundamental to survival. It’s so gorgeous to look at that it’s easy to forget everyone you come across is trying to murder you. So instead of slapping people around then following the glowing gold ‘GO’ arrow, you’ve got to take your time.

Instead of punch, punch, punch, it’s punch, block… wait a bit, launch a severed doll’s head at your foes, sidestep the bulldozer that’s coming back through the screen, and so forth. It’s a little jarring if you’ve just come off Streets of Rage 4 but you’ll quickly settle into it and it makes victory all that sweeter. Your success is down to pure skill, not just finding a chicken in a bin. 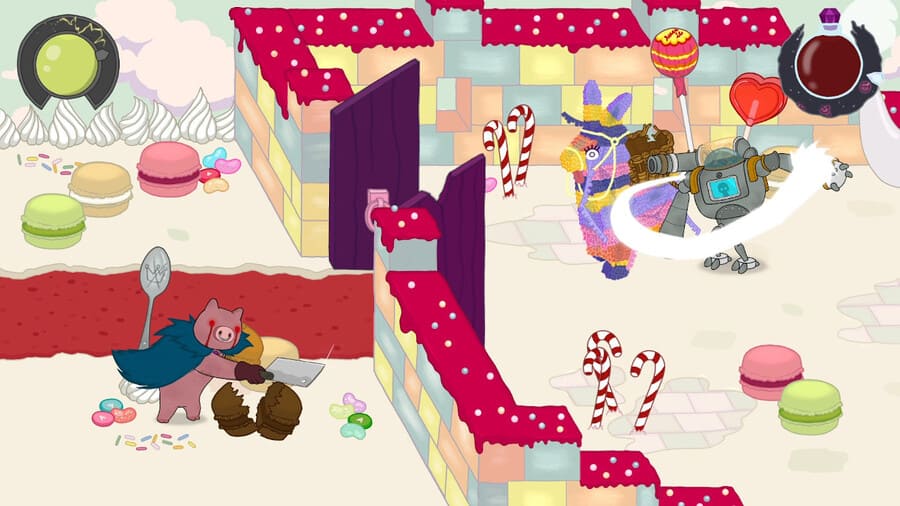 Okay, that’s not entirely fair – Streets of Rage 4 is a great game, but Colossus Down makes you work for your victories right from the word go. On top of the action, the silly and sometimes disturbing storyline is sure to raise a smile; the fact it’s presented as a cartoon makes the violence all the more ridiculous.

Momentarily forgetting Colossus Down came from the same team as the meat-centric Agatha Knife, I wasn’t sure if punching MechaNika’s teachers would result in stars and nothing else. Two seconds later I was gawping at a red stain on the classroom floor. Another neat, if less gruesome, touch is the way you can smash virtually anything. There’s no reward for smashing up school lockers and so forth, but it’s a real joy. 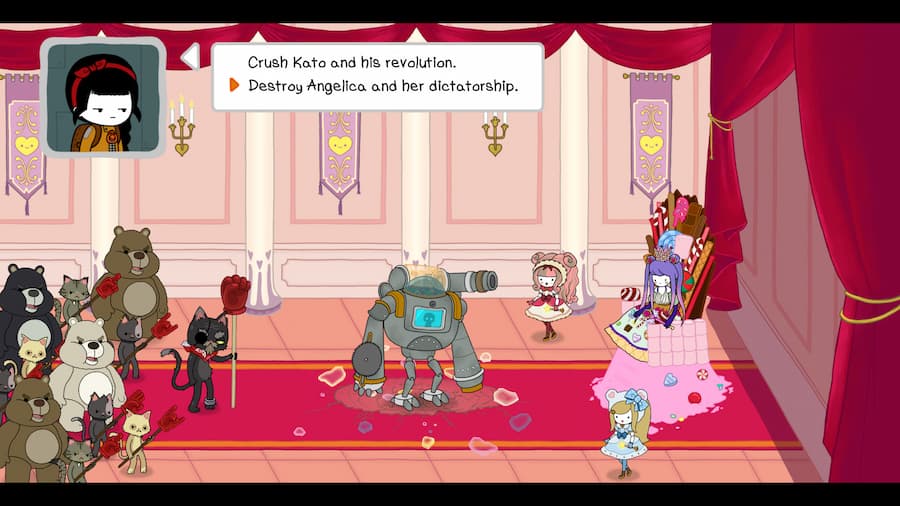 The one letdown has to do with Colossus Down’s two-player mode. Rope in another player and you can dial up the fun by fighting alongside them, you as MechaNika, them as The Great Bleeding Pig (don’t ask). But if you’re playing on Switch, even though you only use one analogue stick and four buttons, you can’t have one player per Joy-Con; instead, you have to get another set of Joy-Cons or another controller.

It’s a frustrating oversight, especially since Colossus Down begs to be shared. Still, it’s a real treat solo and if you’ve got a twisted sense of humour and a taste for side-scrolling punch ’em ups, you can’t go wrong with Colossus Down.

Colossus Down is available on PC, PS4, Xbox One and Switch. We reviewed the game on Switch with a code provided by the publisher. 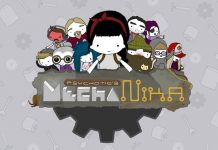 MechaNika is a Funny and Disturbing Game About World Domination 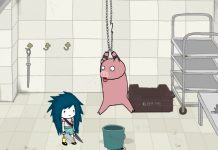