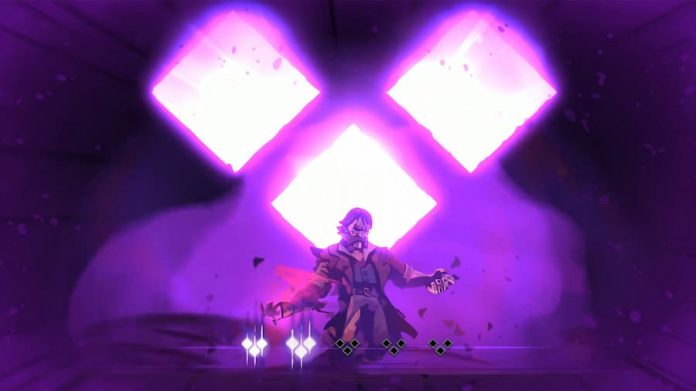 Greed can easily lead to a man’s downfall.

In Passtech Games’ Curse of Dead Gods, greed can also be a lifeline. You see, in this Rogue-like, not much comes for free, and while your pockets may be emptied of their gold, you can purchase that nice relic, weapon or stat upgrade being offered to you with blood if you really want it. The repercussions could be dire, but on the other hand, your new item might just be key to changing your fortune.

Curse of the Dead Gods begins with our unknown protagonist entering a mysterious chamber, a large stone door closing behind them. From there, there are numerous temples they can access, but each one is filled with danger. Early temples are relatively simple, allowing players to chart their own paths through them without much difficulty and perhaps overcome the boss at the end if they keep their wits about them. As those temples are completed, however, more complex temples become available, challenging players to fight for longer and face off against more powerful adversaries.

Each room in a temple has a theme – weapon rooms allow you to take your pick of a new weapon, for example, providing you’re happy to part with either your gold or blood, while healing rooms demand you sacrifice your blood if you want to restore a decent chunk of your health. Not everything you acquire in a temple requires you to part with your gold or blood, however. Chests can be found that offer you a variety of treasures, and helpful items such as relics and weapons can sometimes be dropped by the enemies you defeat. Get the right combination of weapons, relics and stat upgrades, and victory over the temple is sure to follow. 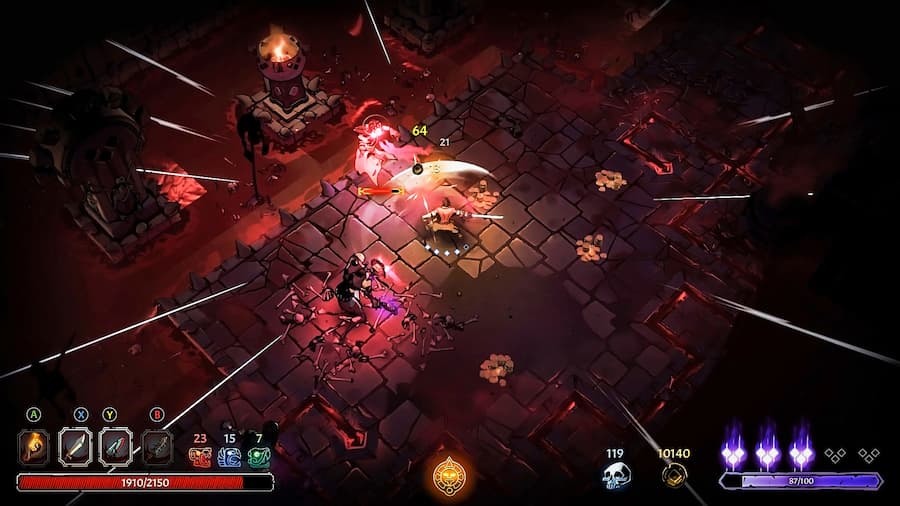 Being a Rogue-like, you start each temple pretty much back at square one. Numerous collectibles earned during your runs allow you to unlock a range of perks and other persistent upgrades that give you more of a fighting chance on your next run. There are numerous altars you can unlock, for example, that present you with random weapon loadouts to take into a temple with you. By upgrading these altars, you can even improve the quality of the weapons being offered to you. The items you need to unlock these upgrades – skulls and jade rings – are accumulated at a very slow rate, however, and some players may not appreciate the grind.

Curse of the Dead Gods‘ thrilling moment-to-moment gameplay is likely to keep most Rogue-like fans going back time after time though. You start each run with a primary and secondary weapon – most are melee focused, but there are some ranged weapons available too. It’s never too long until a two-handed weapon is acquired as well, enabling powerful attacks. With your three weapons in tow, a wide range of combos can be performed, although you always need to be aware of your stamina. Depleted by performing certain actions such as dodging and finishing moves, you’ll be left a sitting duck if you’re not careful. 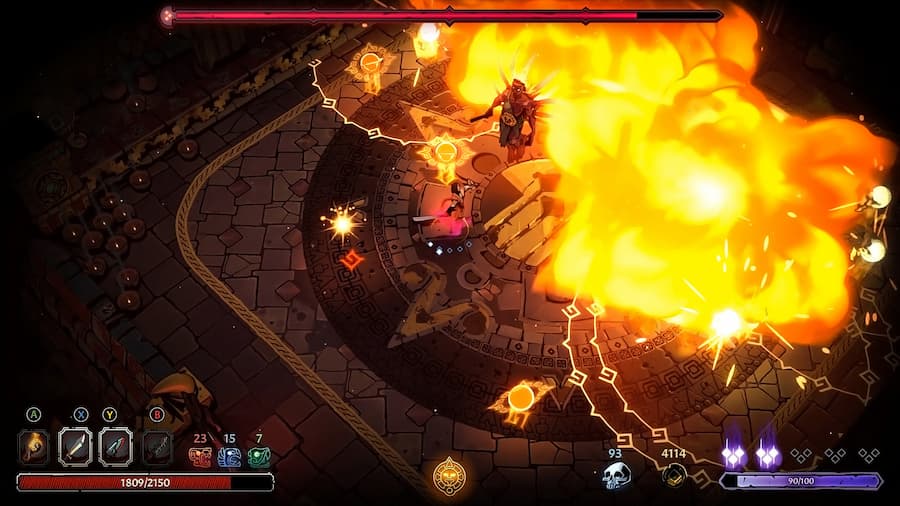 Two gameplay elements really make Curse of the Dead Gods stand out from the crowd. The first is the gamification of dark and light. Our nameless hero always carries a torch into the temples he visits, and with it he can set ablaze other light sources. In the light, traps can easily be identified as well as enemies. More importantly, as soon as you begin to fight, your torch will be put away, and any damage you sustain while in the dark will be amplified. So, you need to set ablaze as many light sources as you can, and keep them that way, while you go about combat. And did I mention that enemies can sometimes extinguish light sources or destroy them altogether?

The whole dark and light system can be made more complicated by Curse of the Dead Gods‘ second unique gameplay element: the fact that you’re cursed as soon as you step foot in a temple. You start out free of corruption, but various actions performed in a temple, and some enemy attacks, increase it. Once a certain level of corruption is reached, a random curse is placed upon you. It might be that traps become more dangerous, or that you start to do more damage to enemies in the dark. On every playthrough, you’re bound to eventually become bogged down with a unique set of curses that force you to adapt in order to survive. The last curse to afflict you always remains the same, however, and it can truly jeopardise your success. 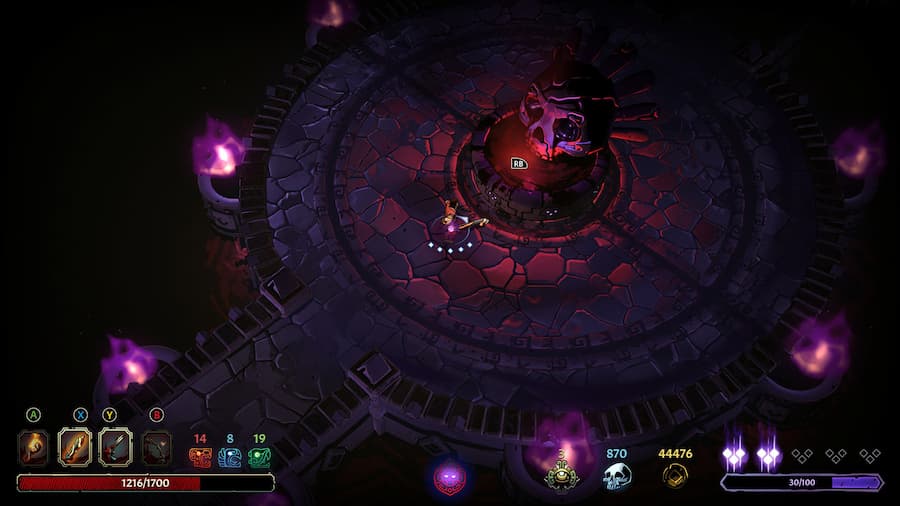 To succeed in Curse of the Dead Gods then, you need to carefully balance your corruption level where possible, seek out light sources, and not only adapt to the weapons and relics that you’re presented with, but also the curses inflicted upon you. It’s a lot to manage. Sometimes it can all become a bit too much if you get an unfortunate mix, but that’s the nature of the beast – you just have to pick yourself up and try again. And try you will, because the gameplay always remains exciting and enjoyable even when the odds are truly stacked against you. It helps that Curse of the Dead Gods looks great, too, and thanks to a toggle that unlocks the frame rate, it plays smooth as silk on a next-gen console.

As Rogue-likes go, Curse of the Dead Gods is up there with the best of them. It’s got brilliant combat, dastardly traps to overcome if you want their riches, and numerous unique systems layered on top that add considerable depth. With the prospect of death (or at least grave misfortune) around every corner, it keeps you on your toes, uncertain of what the future holds. But you’ll find yourself going back time and time again, ever hopeful that soon, the temple that’s been holding you back will be conquered. It’s not for the faint of heart, but Rogue-like fans would be mad to give this the cold shoulder.

Curse of the Dead Gods is available on PS4, Xbox One, Switch and PC. We reviewed the PS4 version (played on PS5) with a code provided by the game’s publisher.

Buy Curse of the Dead Gods on CD Keys