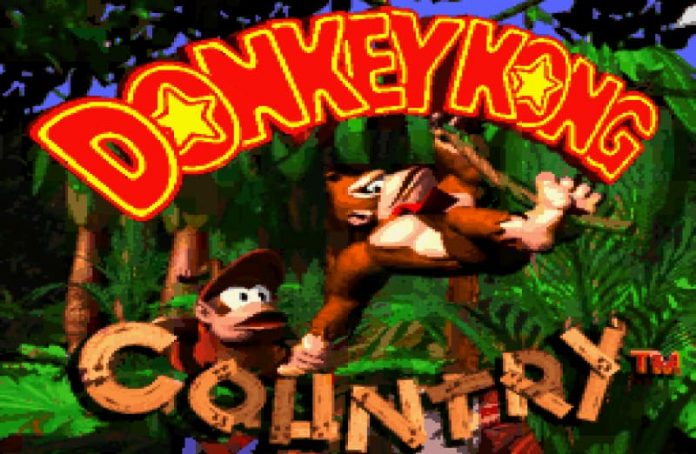 Of the many video game anniversaries in 2021, Donkey Kong stands above them being 40 years old.

That makes him something of a relative old-timer, so what better time to discuss one of his greatest adventures? Developed by British-based Rare, Donkey Kong Country was released in November 1994 to great acclaim and cemented Rare as being one of Nintendo’s strongest third-party developers of the 90s.

Technically this is a whole new Donkey Kong, with the original Donkey Kong of 1981 now going by the name “Cranky” Kong and this Donkey Kong being his grandson (or son, depending on what you read). The plot begins one stormy night, when Donkey Kong’s banana hoard is stolen by the evil King K. Rool and his Kremling army (all the enemy names begin with “K”, presumably due to their love of potassium). Teaming up with his cap-wearing nephew Diddy Kong, Donkey Kong sets out across Donkey Kong Island to put an end to the King’s evil fruit-pinching scheme. It’s a simple set-up, but we aren’t really here for the story.

Being based on a classic Nintendo character, Donkey Kong Country shares much in the way of gameplay with Super Mario. Donkey and Diddy can jump on enemies to defeat them, collect bananas instead of the traditional coins, and even ride animal companions throughout the levels. There’s a similar variety to the stages, too, beginning in the jungle (obviously) before moving on to Aztec ruins, down valleys, up mountaintops and through factories – all culminating in a showdown with King K. Rool on his pirate ship. Even the “Country” suffix is reminiscent of the Land/World/Galaxy trope of the Super Mario franchise, and there’s even an overworld map reminiscent of Super Mario Bros. 3 and World. It’s a clever base to start from, effectively rebooting the character while keeping that million-selling Nintendo DNA intact. 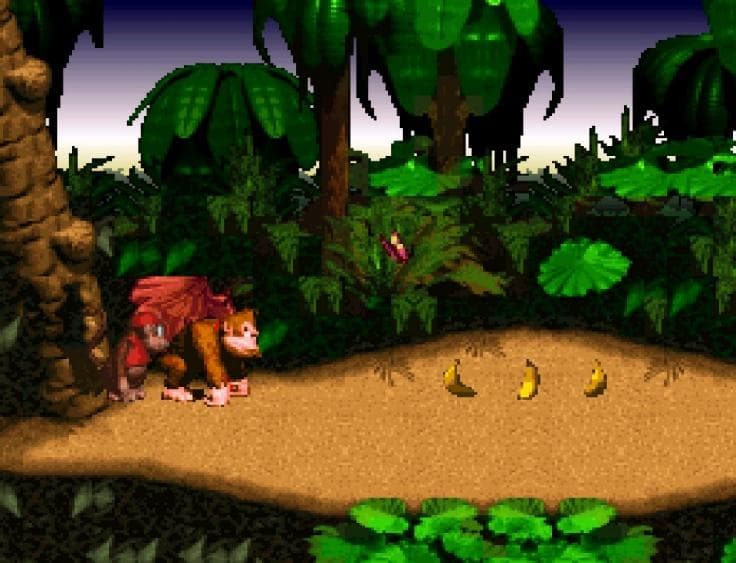 There are a few new additions, such as a rolling attack that keeps the pace moving (but to be honest, I rarely use it) and a tag-team mechanic that lets you swap between Donkey and Diddy at any time. The mine-cart sections also serve to keep things interesting, though the concept was a little over-played even by 1994 standards. There are barrels, too – and a lot of them. Barrels that shoot you places, barrels that you have to shoot manually, barrels that act as checkpoints, barrels that hold a lost Kong, barrels that shoot enemies at you, barrels that you can use as weapons… They offer a lot of fun options for traversing levels and serve to mix up the traditional progression of a platformer.

But let’s be honest, the real big draw here is going to be the graphics. Donkey Kong Country famously uses character models and backgrounds rendered by Rare on Silicon Graphics workstations and compressed to fit on to a Super Nintendo cart. From the moment you boot it up you’re aware that something is different here, as even the opening Rare and Nintendo logos are rendered in this manner. For the time, the game looks amazing for the system it’s on and the high colour palette of the console really shines here. The jungle stages are full of suitably warm greens and yellows, while mountains and ice caves are filled with cold, icy blues. The colours pop and there’s little to no dithering at all on those pre-rendered sprites. 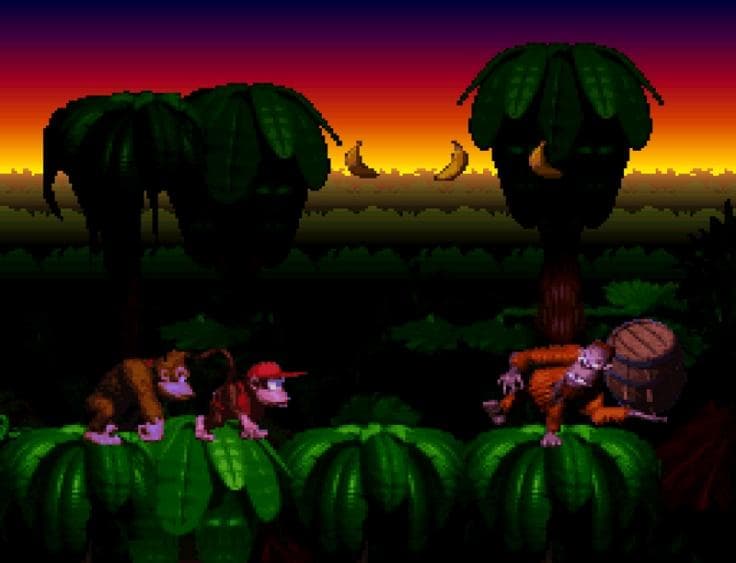 It’s not just the visual style that draws you in, though, but also the implementation. If Donkey or Diddy get hit by an enemy, you lose that Kong and must rescue them from the next “DK” barrel you find. It’s an efficient life meter of sorts, showing the player how many hits they can take without relying on a heads-up display. In fact, there’s very little in the way of HUD at all, with lives and banana counters only showing when needed. Atmospheric environmental effects are also at play in some levels – standouts being “Ropey Rampage” in a thunderstorm, “Orang-utan Gang” going from day to night over the course of the stage and “Snow Barrel Blast” beginning in clear weather and turning to a raging blizzard. It’s all surprisingly immersive.

This immersion is helped by the simply amazing soundtrack by David Wise, Eveline Fischer and Robin Beanland. Featuring a mix of genres, from 1940s swing to chillout, the soundtrack complements the action on-screen perfectly (“Aquatic Ambience” is a highlight). The controls are nice and tight, allowing for accurate in-air movement – something you’ll be thankful for in the trickier platforming sections later on in the game – and when you mess up, you do feel like it was your own fault. Unless you’ve mastered it, you will die a lot but Donkey Kong Country is also fairly generous with extra lives. Not only can you collect 100 bananas for an extra life, but each level holds the letters K-O-N-G which, if found, add another life. There are also a variety of 1, 2 or 3-up balloons, so it’s quite easy to end up with 30+ lives in a playthrough (before no doubt losing them all on a mine-cart stage). 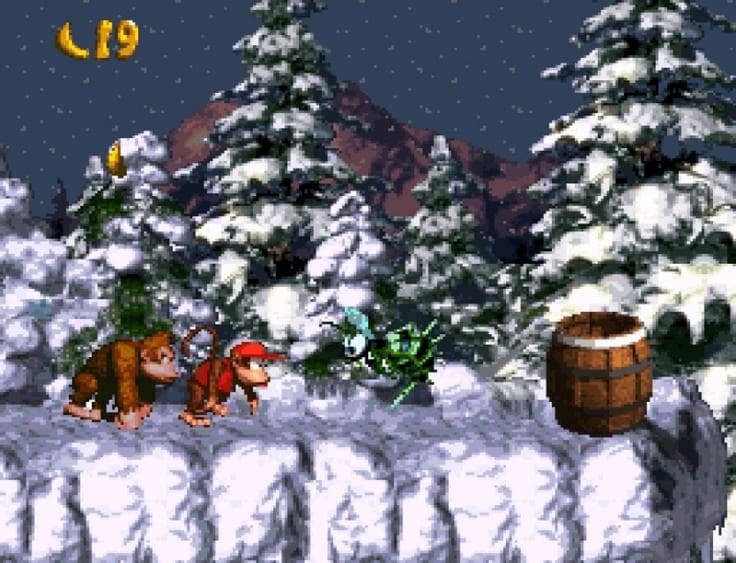 There are some downsides: the bosses are far too easy and seem to be lacking much in the way of creativity, resorting to “jump on them repeatedly”. This is, at least, until the final boss King K. Rool who has a number of different stages to his fight. Some sound effects are grating too, such as the clapping of the Klaptrap enemy and on modern screens some anti-aliasing artefacts are unfortunately noticeable (look for the grey pixels around Diddy’s cap). You can’t really blame a 16-bit game for not looking perfect on your modern 4K set-up, though.

Putting up the cash for a British company to licence one of its oldest characters using new tech is a bold strategy for Nintendo, especially as the Big N had posted a 32% drop in sales a couple of months prior to the release of Donkey Kong Country. A gamble, sure, but it paid off and also helped nail the coffin shut on the likes of the “64-bit” Atari Jaguar proving that 16-bit consoles could do better. It was later ported to both the Game Boy Color and the Game Boy Advance, but if you want to play it these days the easiest way is on the Super Nintendo Mini or via Nintendo Switch Online. 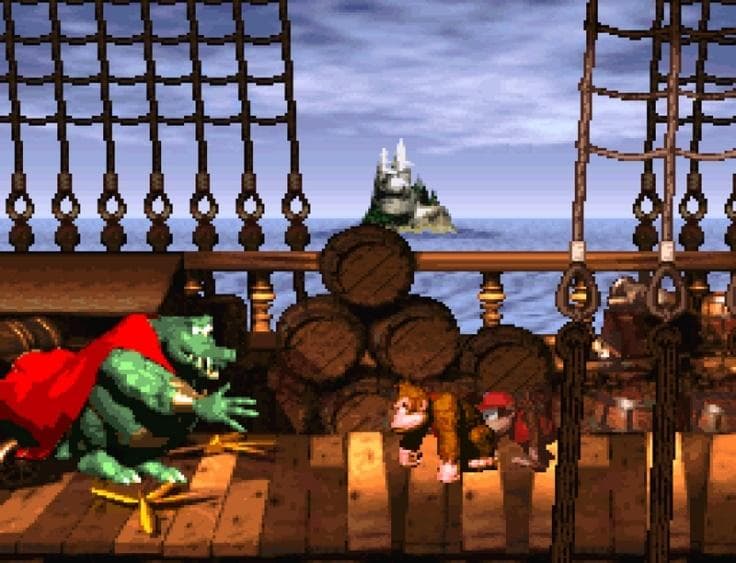 Rare would go on to produce two further sequels, Donkey Kong Country 2: Diddy’s Kong Quest and Donkey Kong Country 3: Dixie Kong’s Double Trouble, in subsequent years. Although they are great games in their own right, they feel more ‘game-y’ by comparison, with an increasing number of collectibles and bonus stages in each game (which would eventually culminate to maddening over-saturation with Donkey Kong 64). The franchise would get a resurgence during the Wii era with Retro Studios’ Donkey Kong Country Returns and again in 2018 with Donkey Kong Country: Tropical Freeze, but for my money nothing beats the simplicity and immersion of the original. Sales speak for themselves, with Donkey Kong Country selling over 9,000,000 copies, making it the third-highest selling Super Nintendo game of all time (even more than my personal favourite, The Legend of Zelda: A Link to the Past). Over 25 years on, it’s still barrels of fun. 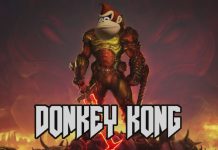