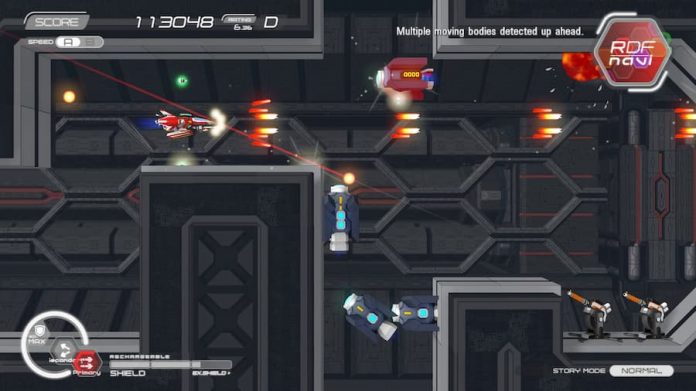 If you’re a fan of shoot ’em ups and have a PS4 or PC, you probably should have played last year’s Ginga Force. If not, get on it, or jump straight into Natsuki Chronicles, a game set in the same world that runs parallel to its events.

In addition to being set in the same world, Ginga Force and Natsuki Chronicles also share many other aspects. They both have separate story and arcade modes, for example, and in their story modes you’re able to upgrade and customise your craft’s loadout. They also both tell tales that you can try to follow if you wish, but unless you understand Japanese you’ll probably not have much luck given how much of it is unravelled as you blast your way through hordes of enemy craft. Chances are, however, that it won’t be much of a problem. Who plays shoot ’em ups for their stories, anyway?

Where Natsuki Chronicles differs from Ginga Force is that it’s a horizontally-scrolling shooter rather than a vertically-scrolling one. The screen moves from left to right of its own accord, yet enemies can appear from pretty much any direction. Little indicators warn you of incoming craft, but you can turn them off if you want it to be more of a surprise. Of course, you can’t just turn your craft around to combat attackers from the rear, so instead you have rear-mounted weapons to make use of. Fire either your front or rear-mounted weapons on their own and their assault will be a little more powerful. Fire them at both the same time and you’ll be able to tackle enemies both front and back, but perhaps a little less effectively.

The thing is though, is that your rear-mounted weapon doesn’t have to actually fire backwards. Some of the rear weapons you unlock project their attacks forward, making you all business up front, and in some missions that’s beneficial. As you make your way through story mode, chances are you’ll die time and time again. And whether you die or succeed at completing a stage, you gain credits that can be used to develop the many weapons you’ve unlocked for use. Multiple special weapon formations can be bought as well – a weaponised shield if you will. Sometimes, all it takes to conquer a stage that’s been giving you trouble is choosing a loadout that’s effective for it. There’s no point having rear-firing weapons if the stage has no enemies that come at you from the rear, for example. And levels with enemies tucked away in nooks and crannies might be easier to beat with a homing weapon equipped. 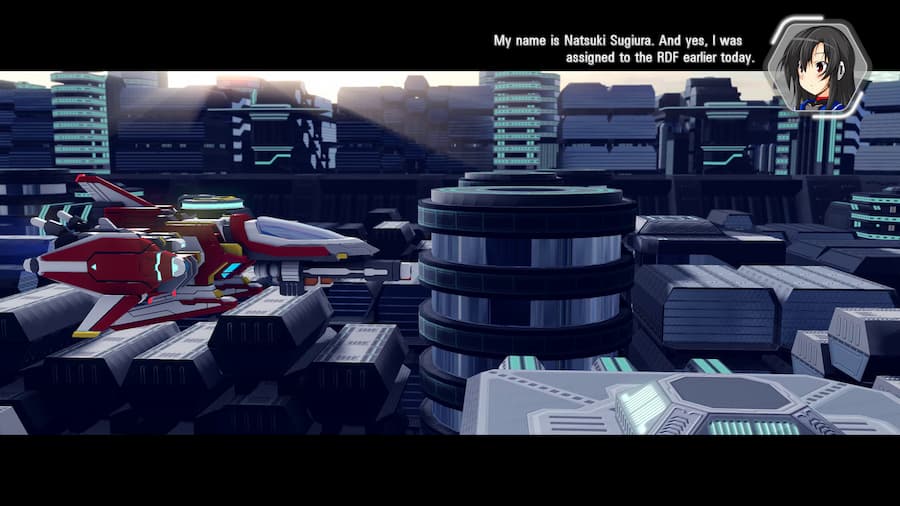 The truth is though, that with persistence, anyone should be able to complete Natsuki Chronicles‘ story mode on the majority of its difficulty levels. You see, thanks to an EX Shield system, every time you play a stage you raise your familiarity level with it. Each time you gain a level, you gain an additional shield, allowing you to take one extra hit. Play a level enough and you can gain so many additional shields that even if you play sloppily you should scrape through. It’s a good way to ensure that players don’t hit a frustrating brick wall.

Ultimately, players will get out of story mode what they want to put in. A single playthrough may only take a couple of hours, but completing all ten stages on all difficulties and unlocking all craft customisation options will take much longer. After that, there’s arcade mode to tackle, which feels like a different game. Challenging you to beat all ten of the game’s stages in one go without story scenes getting in the way, craft upgrades and alternate fire modes are instead delivered as pick ups. For the competitive, high scores can be uploaded to online leaderboards, providing plenty of reason to play through it multiple times. And while the EX Shield system found in Natsuki Chronicles‘ story mode is out, in its place is a system that rewards you with additional continues the more you play. 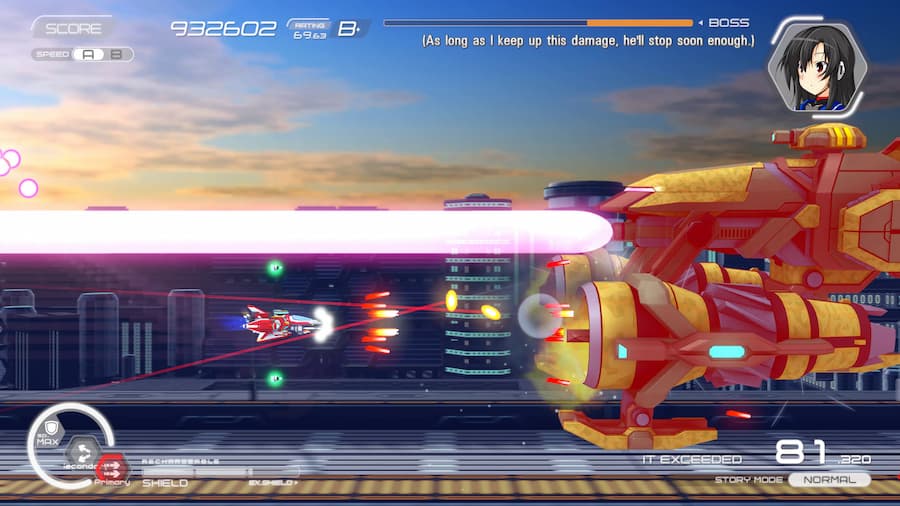 Technically, Natsuki Chroncicles is quite accomplished. Running at 1080p 60fps on a base PS4, and 4K 60fps on PS4 Pro and PS5, its visuals are clean and crisp, and performance never skips a beat. It’s just a shame, then, that its environment and enemy design is largely uninspired. Visually, there’s nothing here that you haven’t seen before; there’s nothing that captures your imagination and makes it stand out.

Unoriginal art direction aside, Natsuki Chronicles is a thoroughly entertaining shoot ’em up that any fan of the genre should check out. Though thanks to its generosity with handing out additional credits and shields in each of its game modes, it’s even suitable for those with only a passing interest in the genre looking for a good entry point. Only players who truly wanted to follow its story will find real fault with it – everyone else will find it to be a blast from beginning to end.

Natsuki Chronicles is available on PS4 and PC. We reviewed the PS4 version (played on PS5) with a code provided by the game’s publisher.