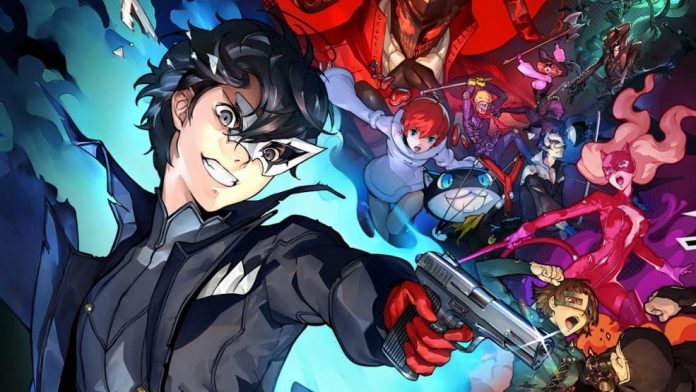 The Phantom Thieves thought their hardship was over; after months apart, they simply thought they’d be able to get together and have a good time. Fate has other ideas.

After a spate of cases in which public figures have appeared to have dramatic changes of heart, Persona 5 Strikers finds the Phantom Thieves suspected as the culprits. They know they’re not responsible, however, and after Joker and Skull find themselves dragged into the Metaverse shortly after meeting and befriending a celebrity designer on a new app called EMMA, the entire team knows something big is going down.

The Metaverse is different this time around, though. Instead of Palaces there are Jails, and the apparent rulers of these Jails, Monarchs, steal the desires of their followers, essentially robbing them of their free will. The Phantom Thieves know they have to do something to help the poor people affected, even if it means forfeiting their planned vacation. And this time, they also need help. Police investigator Zenkichi Hasegawa has taken a keen interest in the group, offering to help them as long as they help him, while an unusual AI found in the Metaverse called Sophia provides as much clarity on the situation they’ve found themselves in as she does raise questions.

What follows is an eventful road trip as the Phantom Thieves drive across Japan to find Jails and clear their names. And while the combat may be action-focussed this time around, Persona 5 Strikers is still very much a Persona game. If you’ve not yet played Persona 5 or its enhanced Royal edition, you can jump into Persona 5 Strikers and have a whale of a time thanks to its brand new story, but you’ll get the most out if it if you’re already familiar with its characters. It’s a spin off but it also very much feels like a sequel, and that means Persona 5 fans are very much going to want to play it.

Despite being co-developed by Omega Force, the studio behind the oh-so-many Warriors games, the action in Persona 5 Strikers is kept in balance with a finely-crafted narrative that has been wonderfully translated. It’s in the real world that most plot advancements occur, and it’s there you’ll also find yourself information gathering, bonding with your friends and preparing for your exploits in the metaverse. Then, when it’s time for action, off to a Jail you go. 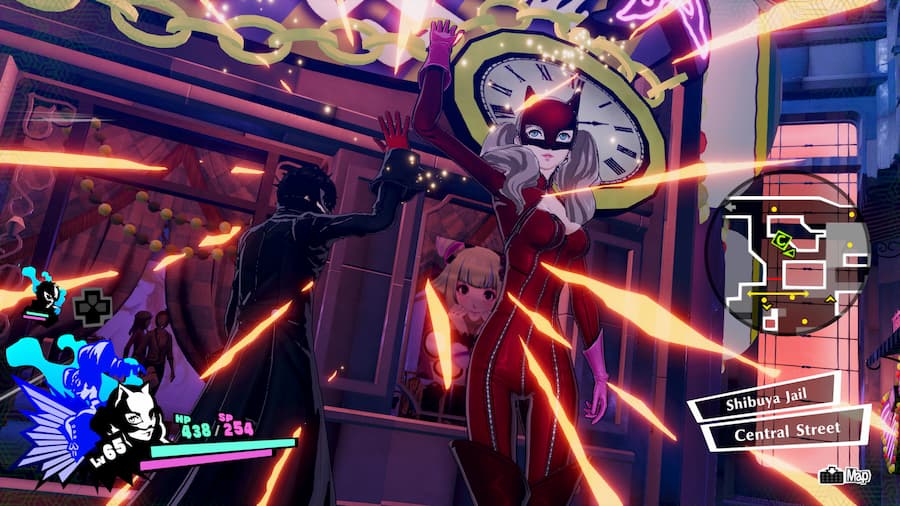 With Omega Force’s involvement, you might think that entering a Jail instigates a giant combat map for you to battle your way across, though you’d only be partly right. There is plenty of hacking and slashing to be done, but the truth is that each jail is actually a bona fide dungeon. Enemies (or Shadows as they’re known here) roam their rooms and halls, and instead of running into them headlong, you’re coerced to dash to vantage points and ambush them where possible. Do so, and you enter battle with a heady advantage. In fact, many fights can be resolved pretty much in seconds by ambushing an enemy and then unleashing an All-Out attack when they’re stunned.

Not every fight in Persona 5 Strikers plays out in that manner, however. Sometimes you’re caught, putting you on the defensive instead and making a fight an actual battle to be won. Other times there are waves of enemies. And while most combat encounters pit you against groups of between 10 and perhaps 100 weaker enemies, sometimes you’ll be facing off against just one fearsome foe, or perhaps even a small group of them. It keeps you on your toes, as well as keeping the combat interesting. 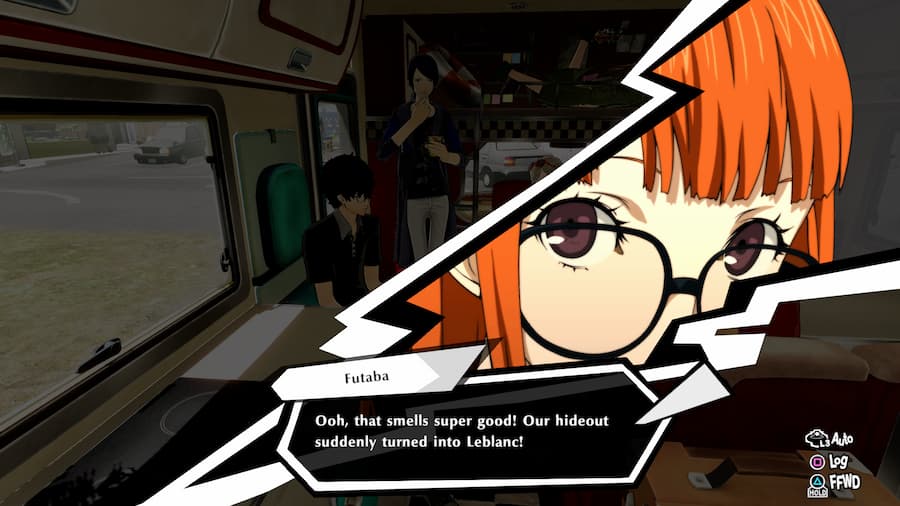 When combating hordes of basic grunts, for example, your standard physicals attacks are generally enough to do the trick; perhaps with the odd special attack thrown for good measure. But the stronger the enemies you face, the more you have to approach Persona 5 Strikers like a true JRPG, making use of the skills afforded to you by your Personas to exploit weaknesses and support your team.

Combat plays out in real-time, but by bringing up your available Persona skills, time freezes while you peruse your options. You can even take time to position your skill for maximum effect; most skills affect an area rather than just one target. So, developing your Personas is a must if you want to succeed, as you can only make a decent mark on the strongest foes by exploiting their weaknesses.

There are other abilities in combat that give you a fighting chance, however. The aforementioned All-Out attack is one, which can be instigated when an enemy’s defences have been eradicated. It can wipe out a whole group of enemies in one go, but is also good for knocking off a decent chunk of a boss’ HP bar. There are Showtime attacks, too, which can be used when the accompanying gauge is full, and you’ll often be prompted to perform a follow-up attack on enemies, allowing you to get another hit in if you’re fast enough on the button. And how could I forget about Phantom Dash attacks, which let you make use of objects on the battlefield to give yourself an advantage? Whether it’s detonating a sphere of energy, firing a rail gun or using a pole as a swing, you’ll be thankful for the opportunities that they offer. 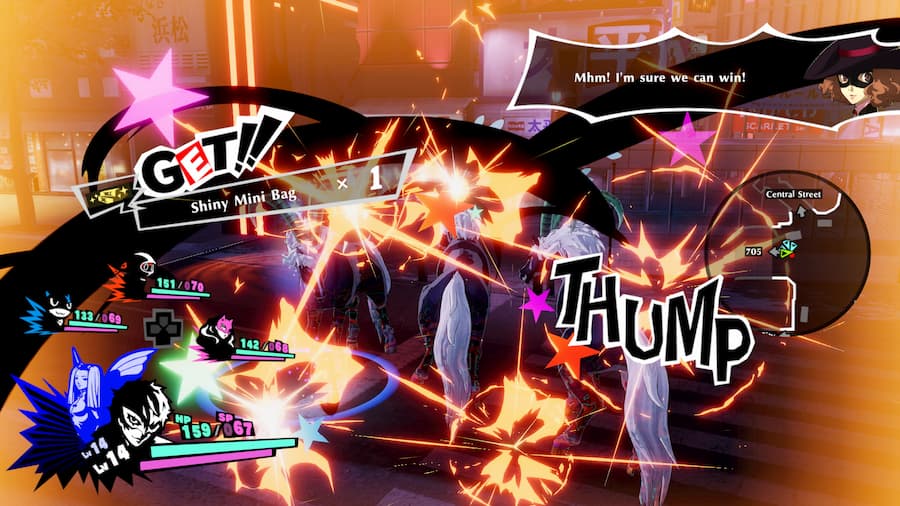 One of the best things about Persona 5 Strikers though, is that you’re not confined to just taking control of Joker. You can take direct control of any of the Phantom Thieves except Futaba, the Oracle, who takes a support role. They each wield their own weapons, including guns, giving them their own unique quirks and movesets. They all have their own Personas, too. Four of the Phantom Thieves them can be in the active party at any one time, and you can easily switch between them with the d-pad. Sometimes, in the middle of combat, they’ll shout out if they’re in an advantageous position or have a powerful skill for use lined up – press the requisite d-pad direction in time and you’ll switch to them, laying the hurt on your opponents.

The only thing that occasionally gets in the way of Persona 5 Strikers‘ combat being riotous fun from beginning to end is a camera that sometimes feels like it’s working against you. During the most hectic fights, it often hides enemies offscreen, allowing them to get cheap hits on you. It wouldn’t be so bad if it wasn’t for the fact that, sometimes, all it takes to ruin a fight that’s going your way is to be hit by one powerful attack. When it’s one that you didn’t even see coming, you can feel particularly aggrieved. It doesn’t happen all that often, however, especially given the fact that you quickly learn to make use of your dash ability to get out of harm’s way whenever you see the tell-tale sign of of a spell being cast in your area, or when a fellow team member shouts out that a strong attack is incoming. Plus, if you do die, you can simply restart the battle. 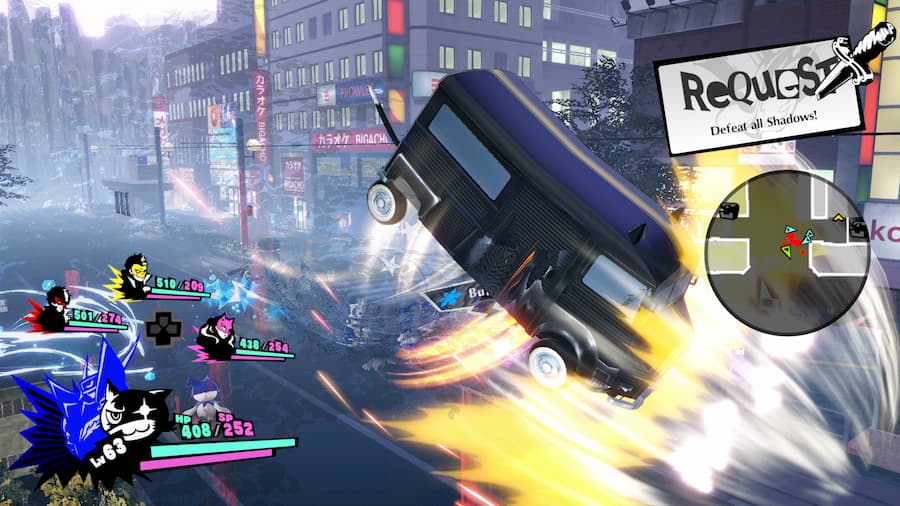 It’s testament to Persona 5 Strikers’ strong story and combat that it grips your attention for a good forty hours without ever feeling repetitive or that it’s dragging. It gets off to a bit of a slow start, sure, but once you’re hooked, you’re along for the ride until the credits roll. There’s more than forty hours of fun to be had too, if you want it. A request system gives you reason to return to Jails and keep on battling. Of course, there are many Personas for Joker to acquire too, and to create a formidable line-up of them, you’ll need to fuse and upgrade them to your will. And finally, the by raising the Phantom Thieves’ Bond level, points are obtained that can be then used to unlock a varied range of skills that are useful in and out of battle.

Blending an engaging and often thought-provoking narrative with combat that flirts with both strategy and chaos but always remains fun, Persona 5 Strikers is quite simply one of the best action RPGs I’ve ever played. If you love the Persona series consider it a must-play, but even action game fans that have never touched a Persona game before might want to give it a try. The combat is a far cry from Omega Force’s usual brand of mindless hack and slash; in fact, it’s totally unique. And alongside the usual Persona 5 flair such as bold visual design and an utterly sumptuous soundtrack, it creates an experience that could well be one of the highlights of 2021.

Persona 5 Strikers is available on PS4, Switch and PC. We reviewed the PS4 version (played on PS5) with a code provided by the game’s publisher.