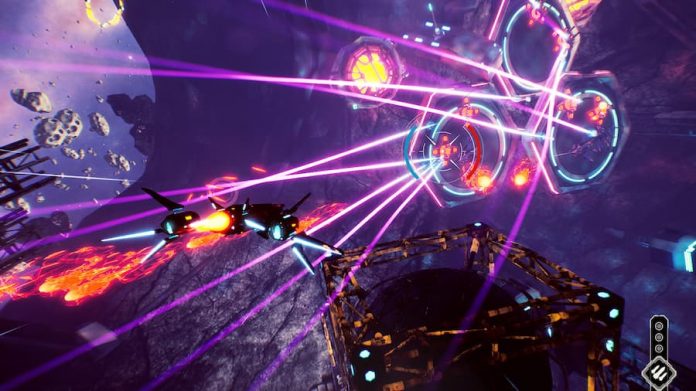 Redout is back! Sort of.

First released in 2016, Redout started life as a WipEout wannabe anti-gravity racer. It wasn’t bad, actually; we reviewed it on PC, calling it “fast, beautiful and absolutely delightful”. For some reason, though, when it comes to its follow up, developer 34BigThings has decided to keep the name but completely change practically everything else about the game. Enter Redout: Space Assault.

Forget anti-gravity racing. Redout: Space Assault is an arcade space shooter that sees players fly through space, destroying enemy ships and manoeuvring between all manner of obstacles. Why it needs the ‘Redout’ name attached to it is unfathomable, really; the only thing these two games have in common is the lack of gravity.

Redout: Space Assault is level-based, with each level generally only taking a matter of minutes to complete. Each one has a primary objective – usually revolving around taking out your enemies – and a number of secondary tasks to complete if you’re up to the challenge. Completing objectives rewards you with coins, which can be spent on upgrading your ship’s weapons and defences. It’s a very minor RPG element, but one that’s very welcome. It also means there’s always reason to go back to clean up secondary objectives in levels; more coins means more upgrades.

Despite having a variety of objectives tacked to them, Redout: Space Assault‘s levels don’t offer a great deal of variety. You’ll find yourself flying through similar environments time and time again – how different can the vastness of space look, after all? That’s not to say it’s not a pleasant-looking game; it’s a very eye-pleasing vastness of space, with asteroids and space-rock punctuating beautifully-coloured skies. You’ll rarely get to take it in, though, as you’ll be too busy shooting down enemies and squeezing your ship through rocky pathways. 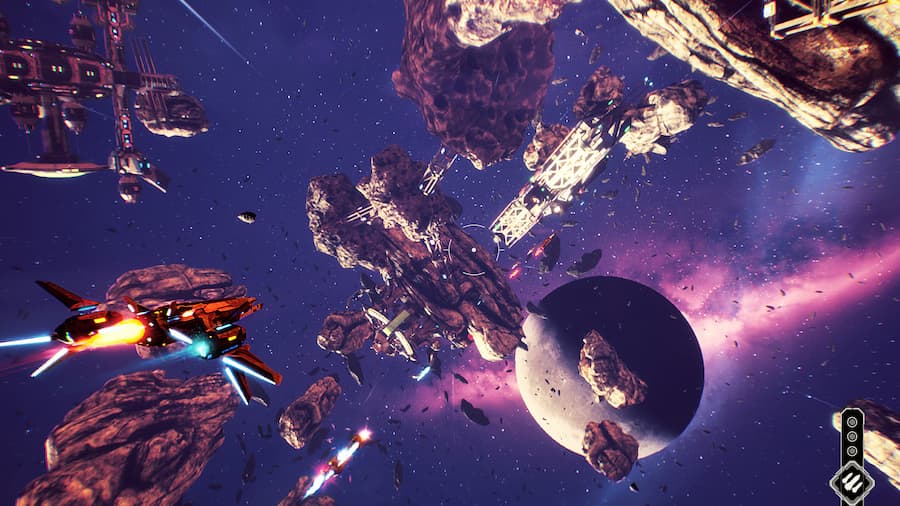 There’s a bit of a narrative to go along with Redout: Space Assault‘s action, but to be honest you’ll likely not care about it. Faces and text boxes pop up on your screen, accompanied by middle-of-the-road voice acting, telling you about various threats popping up here and there. It serves its purpose by tying each mission together, but that’s about it.

The majority of Redout: Space Assault‘s missions are on-rails. You have some control over moving your ship around the screen, but you’ll automatically propel forward on a trajectory. It takes some of the control out of your hands, meaning all you have to do is focus on shooting enemies and dodging incoming fire. Roll with your shoulder buttons and fire your missiles with triangle; there’s little more to it. Holding down the fire button will launch multiple missiles, all of which automatically lock on to nearby enemies. 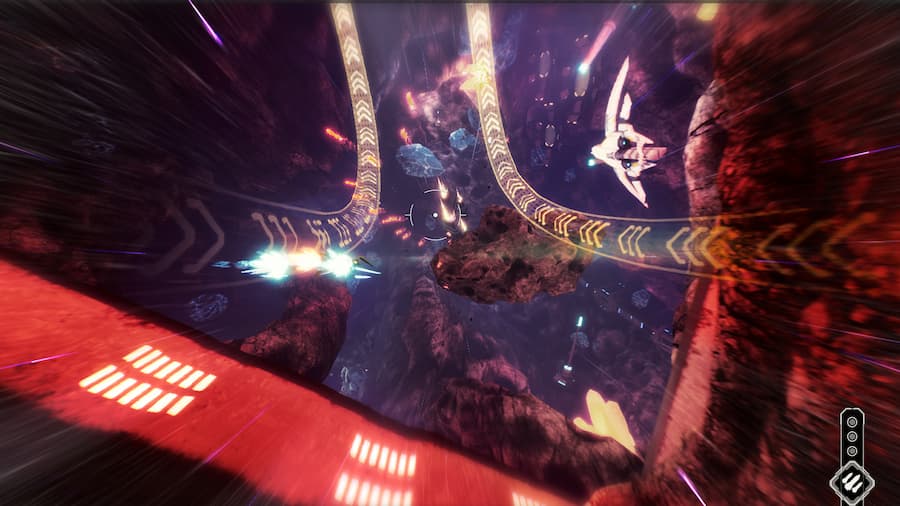 Not all of the game is on rails, however. A few levels give you the freedom to fly around unaided, letting you collect coins and find ‘blueprints’. These sections are enjoyable, particularly as you manoeuvre yourself through tight caves and rocky ravines.

Its limited control scheme means that Redout: Space Assault is never particularly difficult, but it does throw up a few challenges – particularly when you’re facing off against huge enemies that require you to unload a lot of firepower upon them. Keeping pace can be tricky, even more so if they come to a standstill; you’ll end up flying past them and turning around in order to keep shooting, and trying to control the camera in these moments is frustrating to say the least.

Most players will probably blast through Redout: Space Assault in just a few hours. It’s a game that doesn’t try to do anything special, but it provides enough entertainment, particularly if you enjoy some arcade-style space-shooting action. And for less than a tenner, that’s fair enough.

Redout: Space Assault is available on PC, PS4, Xbox One, Switch and Apple Arcade. We reviewed the PS4 version with a code provided by the publisher.

Redout is Racing Onto Switch This May 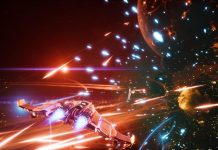 Everspace Gets a Standalone Hardcore Mode