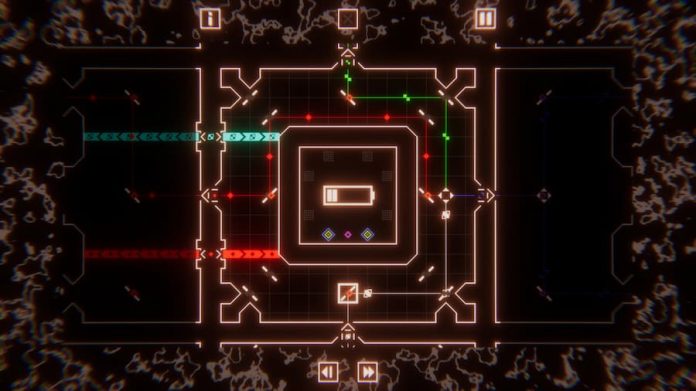 At first glance, it isn’t entirely clear why the light beams in SOLAS 128 pulse along to beats in the catchy, whistle-worthy soundtrack.

It is only after reaching a certain point, several puzzles along, that it all becomes clear and a smart puzzler becomes a fiendish addiction. To sum up the basic premise of this neon puzzle game is simple: SOLAS 128 is a light deflection mini-game stretched out. Players must guide a continuous beam of light from its starting point to a node which unlocks the next section. And it is continuous. Each room in which the puzzle is housed abuts up next to the previous, where the light pulses through a gap and on and on.

The light beam starts out red. You pick up and place mirrors on a grid to bounce it around and out of the area, into the next. Suddenly a green node starts flashing at the bottom of the screen, directing a green laser to who knows where. Then, several rooms along, the green laser interjects and now you must juggle them both; guiding them onwards, sometimes mixing the colours to produce a new hue to unlock another node.

It’s here where you realise why the light pulses; on every third beat or so, an arrow travels along the light beam. If two colours collide when the arrows meet, the beam can change direction without mirrors. Instead of travelling along the horizontal or vertical, it becomes a diagonal beam endlessly trudging on. This brings in a whole new angle (literally) to each puzzle. The beauty of SOLAS 128 is that the puzzles never feel unfair, the game simply adjust the parameters. If a solution isn’t immediately forthcoming, putting it down for a few minutes often reveals a new avenue of thought. 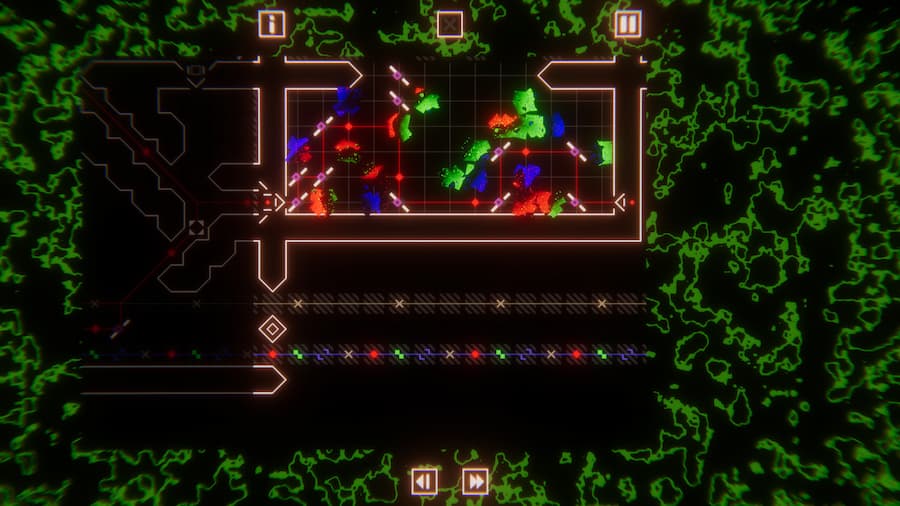 Pausing the game to think over a particularly tricky puzzle pulls out the close focus to a wide overhead view, showing each room you’ve successfully navigated on a kind of map. You can trace the lines of light and feel a sense of satisfaction before delving back in. The puzzles themselves become increasingly difficult, with some causing you to think back several rooms to decide whether you can alter the timing of a laser by adjusting a mirror, thereby helping you in the current puzzle.

There is an overarching reason for SOLAS 128‘s puzzles, but it’s a little muddy to work out; something to do with glitches in a ‘system’. Patches of noisy coloured disturbance altering the ‘system’. These appear in your grid puzzles and absorb the lasers, adding another roadblock to the solving. Playing on Switch, more difficulty comes from the clunky controls; picking up and placing mirrors using the sticks is far from ideal. The touchscreen is much more effective but led me to thinking that a mouse would feel even more intuitive. 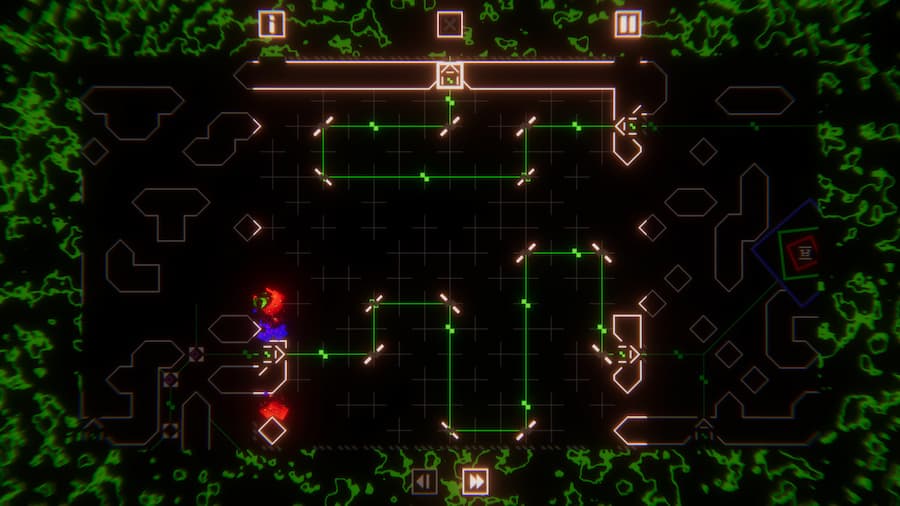 This is where SOLAS 128 falls down: it doesn’t ever really feel intuitive. It fails to point you in the right direction in the opening moments – a brief explanation of what each button does would go a long way. The vague ‘story’ also lets the whole experience down somewhat; had it been more fleshed out, it would elevate the mechanics.

But in the end, does it really matter? Tetris never had a story and that has kept us coming back for decades. If a game like this is to be judged on its puzzles alone, then SOLAS 128 is a superb entry into the puzzler genre. Though it is best played on PC, where the controls feel more at home.

SOLAS 128 is available on PC and Switch. We reviewed the Switch version with a code provided by the publisher.