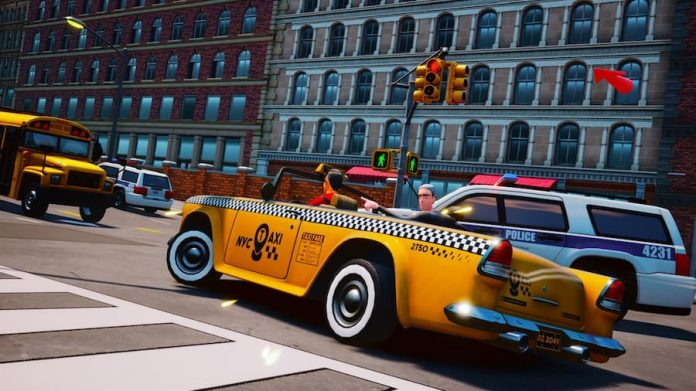 SEGA doesn’t seem interested in making a new Crazy Taxi game, so Lion Castle has picked up the ball and run with it.

The result is Taxi Chaos, which is unashamedly a Crazy Taxi rip-off. It’s got multiple bright yellow taxis for you to tear through the streets with against the clock, with colour-coded passengers to pick up and speed to their destinations for cash. Perform well enough and you’ll earn a sport on the global leaderboards – a boast-worthy achievement as ever. The only thing that’s missing is The Offspring blaring out in the background.

A day one patch has as least added some rock music into the mix, but you still might want to provide your own music if you intend to sit down with Taxi Chaos for a length of time. Will you want to do that? Maybe. While Crazy Taxi aficionados might be simply offended by how much of a rip-off Taxi Chaos is of their favourite game, casual players just looking for some arcade thrills and spills are likely to have a ball with it.

The handling is responsive and devoid of almost all depth – in any other racing game that would be a terrible thing, but here, it’s not so bad. To take a tight turn, all you simply need to do is lay off the gas and steer left or right. Corners, then, aren’t much of a hindrance unless you’re mid-way through a boost, instigated by holding both the accelerator and brake down before releasing the latter. The main challenges you face in Taxi Chaos are learning the best routes to the various landmarks of NYC – that’s New Yellow City – and dealing with its traffic.

When I say ‘dealing’ with traffic, I mean avoiding it. Hitting other cars is a sure-fire way to fail. Firstly, it slows you down. Secondly, if you hit a cop car, you’ll be fined. Both of those are disastrous for a taxi driver up against the clock. Most of the time you can simply weave between vehicles or even mount the sidewalk. In the gravest of situations, however, there’s a jump button you can use. Forget reality; when an obstacle is in your path, simply catapult your taxi into the air, leapfrogging over all of your problems. 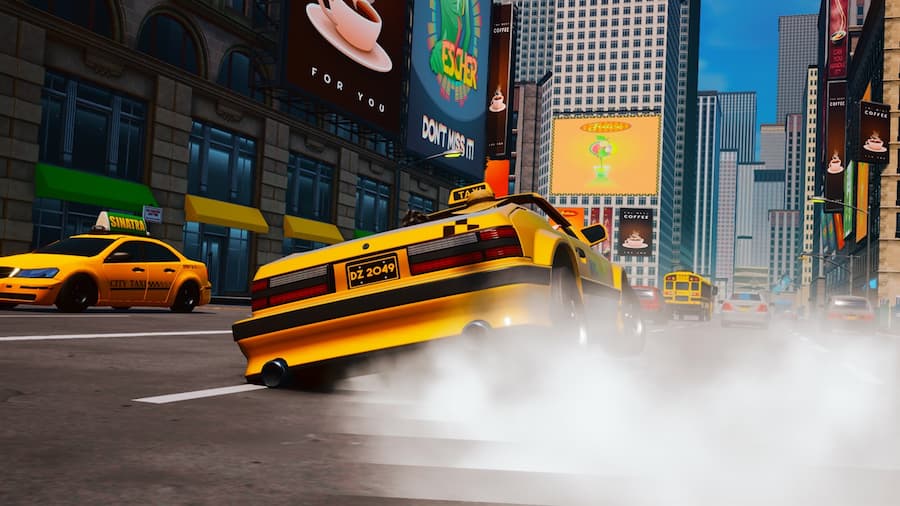 While a single arcade mode session is likely to last only a few minutes, you’ll return to it time and time again to better your score. And after a short while playing arcade mode, you’ll unlock a pro mode which challenges you to carry out your taxiing duties without a helpful pointer directing you to your next drop-off location. On the opposite end of the spectrum there’s also a free roam mode, allowing you to drive around New Yellow City at your leisure. It’s up to you whether you simply take in the sights, pick up punters for fun, or hunt for collectibles.

Two taxi drivers are available in Taxi Chaos: Vinny, a cabbie with years of experience under his belt, and Cleo, a self-proclaimed influencer. While your choice doesn’t really affect how the game plays, the car you put them in control of does. Only one is available at the outset, but by meeting various conditions more become available for use. From a pickup truck with serious heft to a light but speedy sports car, your choice of vehicle may ultimately decide how you ferry your passengers from one point to another. 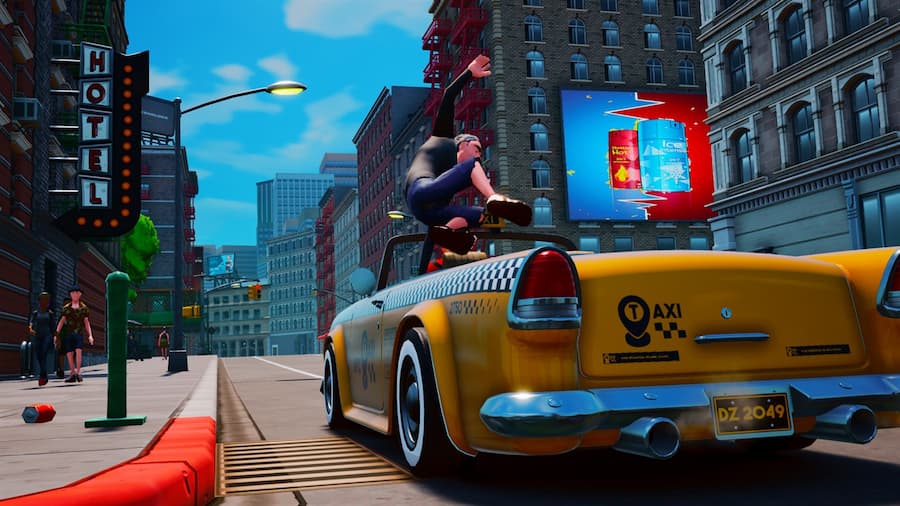 I’ve been playing the PS4 version of Taxi Chaos on a PS5 for review, and while New Yellow City is very colourful throughout, it’s also a bit blurry. An option to boost the resolution would certainly be appreciated. Still, at least the game performs admirably, with no frame rate issues encountered even when the streets are packed with traffic.

Is Taxi Chaos going to blow you away? Of course not, but it is pretty decent. You won’t care for its soundtrack, its visuals won’t wow you, and its handling is as simple as can be. Blasting around New Yellow City while picking up passengers and dropping them off at their desired locations is fun though, while pro mode is highly rewarding for those who learn the ins and outs of the game’s map. So, if you’re after something to scratch that Crazy Taxi itch, Taxi Chaos may well be of interest to you.

Taxi Chaos is available on PS4, Xbox One and Switch. We reviewed the PS4 version (played on PS5) with a code provided by the game’s publisher. 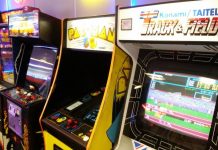 Raiders of the Lost Video Games: The Hunt for Britain’s Last Arcades