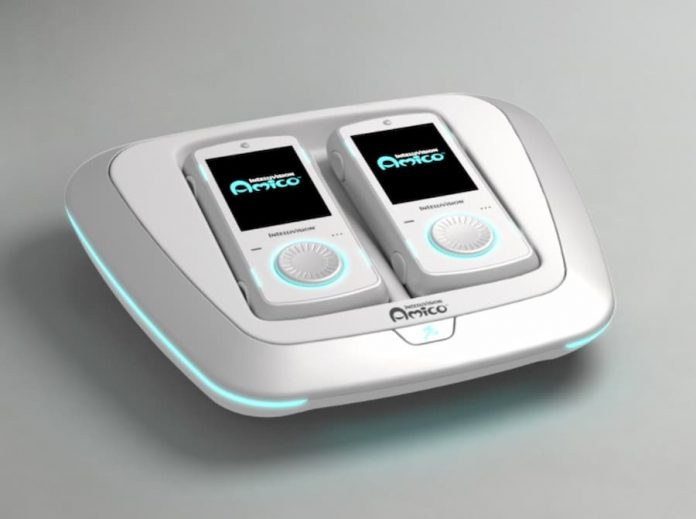 The Intellivision Amico is set to arrive in living rooms this October.

Never heard of it? We don’t blame you. Our exposure to the original 1970s Intellivision has been seeing it turn up in second hand shops once in a while and we’d seen the Intellivision Lives compilation every now and then. But a new console? Arriving this October? Did we stumble into an alternate universe where Nelson Mandela is still alive and has a silver leg?

Apparently not; the Intellivision Amico is a real console, and by ‘real’, we mean it exists as more than just a 3D render. It’s an odd beast, coming as a pair of touch-screen handheld controllers and a base unit, though if you buy enough Amico controllers you can have eight-player games. The handhelds resemble off-brand MP3 players but include motion control; the resolution of each screen is fairly low so the idea is that the base unit is plugged into a big-screen for all to participate.

There are a range of Amico games, all of which are designed to be family friendly, including six which will be built into the console. The gameplay trailer, which you can view below, shows a racing game, a couple of shoot ’em ups, a pong variant and more. Games will be priced at around £2.49, with the console costing £249 to buy.

“Our team is on a mission to bring family and friends together again,” reads Amico’s site. So is there a market for the Amico? The cheap games could be a draw, though other platforms also sport titles that, despite their cheapness, are well worth dipping into. And, from what we’ve seen, the Amico seems to be stepping on the Nintendo Switch’s toes a little.

Still, if the Amico appeals to you, you’ll be able to get your hands on it when it launches this October 10th and you can find out where to pre-order it from the official site. But, having been burnt by the Mega CD and a couple of other consoles, we’re holding onto our money for now.