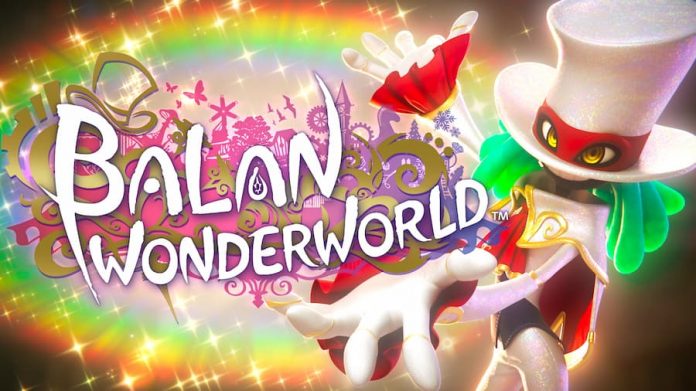 As former head of Sonic Team, Yuji Naka has delivered some classic platformers over the years. Balan Wonderworld unfortunately isn’t one of them.

Though it’s probably not as bad as you might have heard. The truth is, Balan Wonderworld is a game with a lot of heart and some really inventive ideas. It’s just a shame that a cacophony of frustrations undermine what’s good, ultimately turning the experience into a mixed bag of heady highs and crushing lows.

A game about facing your fears and overcoming negativity, Balan Wonderworld presents 12 stories for you to uncover. In layman’s terms, that means there are 12 worlds for you to make your way through, each consisting of numerous stages and a boss fight. Initially only one world is available; to unlock the rest you need to collect Balan Statues, which are generally found in hard-to-reach places. In your foray into the game’s first world, you’ll swear that some of them are unobtainable, and that’s because they are. You see, playing as a young boy or girl, by default all you can do is jump. To perform the actions required to reach the nooks and crannies of each of the game’s worlds, you’re going to need to make use of costumes.

Over 80 costumes are available in Balan Wonderworld, with a handful or more dished out within each world. Each and every one of them offers its own skill or perk that makes it useful in certain circumstances. Those spider webs hanging on some of the walls in the first world, for example, are troublesome until you find the costume that actually turns you into a spider, then you can climb them. You might find rather large mechanical boxes that leave you puzzled too, until you find a costume that turns you into a gear and allows you to operate them.

On paper, Balan Wonderworld‘s costume system is pretty neat, encouraging you to revisit earlier worlds once you have new costumes available to uncover all of their secrets. But there’s just one frustrating caveat: you don’t simply unlock costumes for unlimited use, you collect them. That is to say that they’re effectively consumable. You can have up to three costumes accessible at any one time, though with no health system in play, if you get hit by an enemy, caught by a trap or plummet to your death, your current costume is forfeit. Run out of all costumes and you’re simply turned back into a basic girl or boy. 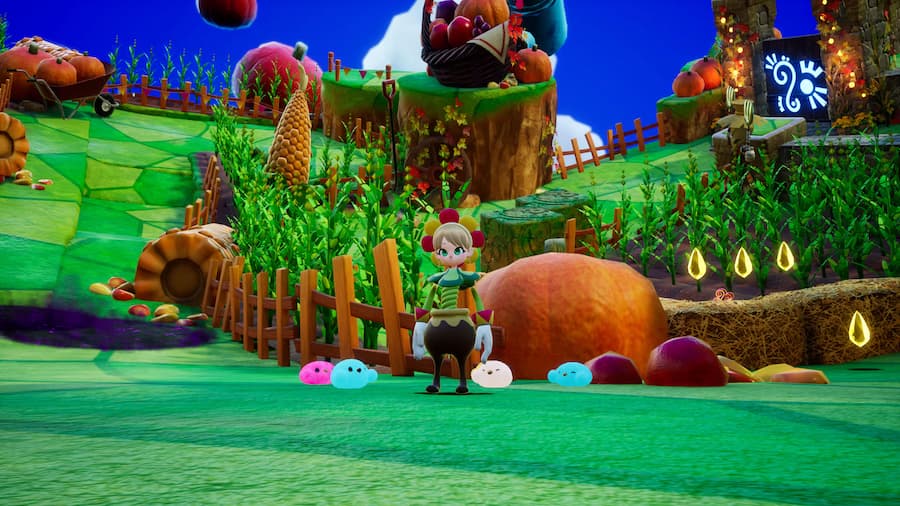 As you make your way through Balan Wonderworld, then, you’re going to want to collect multiple of each and every costume available – especially if you’re keen on putting them to good use in earlier or later levels. Thankfully that’s not too much of an arduous task – there are usually plenty of instances of each costume available for you to grab in each world, and the keys needed to grab them are always close by. They respawn, too, if you hang around long enough. The problem is, by picking up a new costume it gets added to your current palette of three, pushing out whatever’s in the third spot. That means you could end up with only access to multiples of the same costume, limiting the abilities you currently have available.

You can try to avoid the issue if want by switching your costume so that the one in the third spot matches the one you’re about to pick up. It can become a bit of a pain though, as switching your costume cements you in place for a few seconds while an animation plays out, halting the pace of the game. Not that having multiple copies of the same costume is always a problem; sometimes it’s actually beneficial if you really need a certain ability, as if you take damage you’ll have another costume that provides it waiting for you. But by the same token, sometimes you’ll take damage, lose a costume, and then be left pretty much defenceless or unable to proceed due to lack of an ability. Some costumes, for example, don’t even allow you to jump. 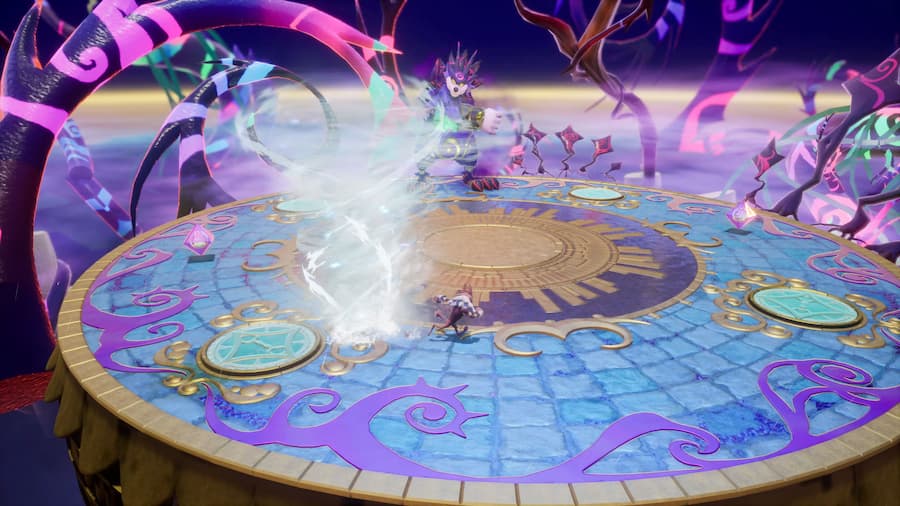 Checkpoints double up as places where you can change your current selection of outfits from those you have available should you remain stationary on them for long enough, and the saving grace is that they’re fairly liberally spread. It seems like a band-aid for an issue that shouldn’t really exist, however. I can’t help but get the feeling that Balan Wonderworld would have been more fun if it did have a standard health system, with death taking you back to a checkpoint. And alongside that, once you unlocked a costume for use, you permanently had access to it. All costume abilities should be in addition to your character being able to jump, too. And the process of changing between them should be quicker.

While Balan Wonderworld‘s costume system is the most heinous of its frustrations, there are several more. Respawning enemies is one of them. Combat is very basic – jumping on the heads of your enemies or making use of costume abilities to thwart them from time to time is entertaining, but in areas where you need to go back and forth, constantly respawning enemies gets tiresome very quickly. “Balan Bouts” are another bone of contention – these quick time events hidden in each world award you with Balan Statues, but only if you manage to get ‘excellent’ timing on each of their required button presses. Slightly mistime just one and you’re given nothing but a boost to the gems you’ve acquired. Later worlds have three of these to be found in each of their stages, which is a bit much. 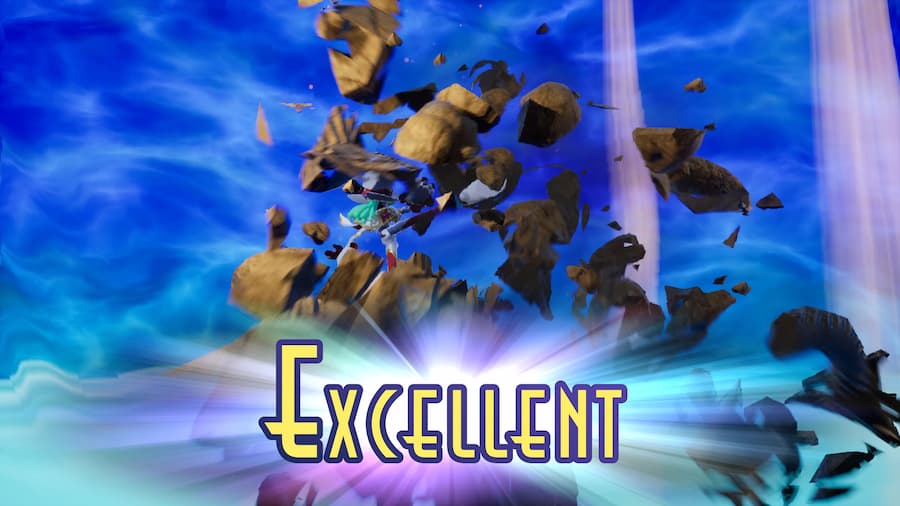 It’s shame that the issues found in Balan Wonderworld undermine its creativity and desire for you to feel joy. Its worlds are varied and full of colour, with inhabitants that happily dance their lives away and randomly praise your efforts. Boss fights are suitably epic. It has a wonderful soundtrack and beautifully-rendered CGI story sequences. Even the game’s hub is a pleasure to visit – a place where you can nurture little fluffy creatures called Tims with the gems you’ve collected. Balan Wonderworld has a lot going for it, but its gameplay is sabotaged by elements that suck out the fun.

If you’re the patient sort, chances are you’ll have a good time with Balan Wonderworld overall. Costume management is clunky, but you’ll deal with it in order to find the secrets hidden within each world, and you won’t be too perturbed by the eagerly respawning enemies and repetitive Balan Bout sequences. For most players though, everything combined will probably prove to be a little too much. Balan Wonderworld is a game that’s capable of bringing out both delight and dismay in its players, though it serves up a little too much of the latter at times to be easily recommended.

Balan Wonderworld is available on PS4, PS5, Xbox One, Xbox Series X/S, Switch and PC. We reviewed the PS5 version with a code provided by the game’s publisher. 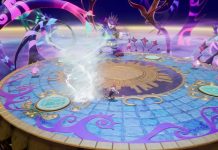