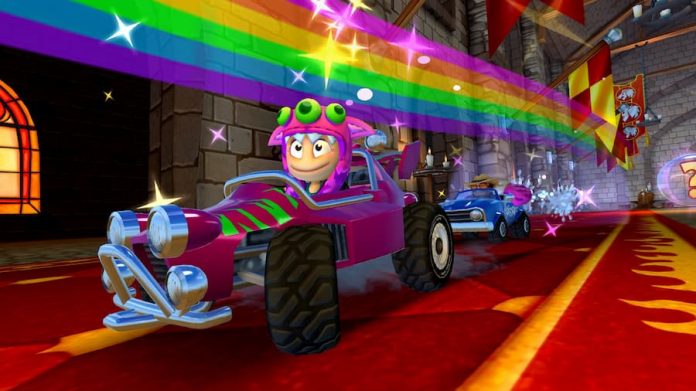 It’s hard to talk about a karting game without comparing it to Mario Kart, but the Beach Buggy Racing series deserves to stand on its own four, uh, wheels.

The first Beach Buggy Racing released back in 2014. Clearly a lower-budget affair than the karting games it was competing with, it still managed to hold its own, being a fairly entertaining racing romp around some pleasant environments. Its sequel, Beach Buggy Racing 2: Island Adventure, out now on PC and consoles, takes the same formula and makes it bigger and better. And, if you’re a karting fan, what you’re left with is a very competent game that can compete with the best of them.

Beach Buggy Racing 2: Island Adventure allows you to play through a full career if you want to, though you can also jump straight into tournaments or quick events. Whether you prefer to race on your own or against friends locally, you’re also catered for. The career mode is undoubtedly the highlight of Beach Buggy Racing 2: Island Adventure, though. You’ll make your way around a huge map of the game’s island, competing a chain of events in order to progress. You’ll earn up to three stars on each event depending on your finishing position, and those stars will be used to unlock ‘gates’ to allow you to move through the map.

There’s a range of events to compete in, though most of these are eight-player races. They’re mixed up somewhat though, with some races having different pick-ups available. Most typically there’ll be a full variety of pick-ups – boosts and all types of weapons – but some events have a smaller selection to ensure a particular type of carnage ensues. There are also time trials, ‘firework fury’ events – basically time trials with rockets added all over the track – and drift challenges.

As you progress through the career, you’ll also unlock upgrades for your vehicle. The great thing here is those upgrades aren’t tied to one vehicle; the improvements you unlock are available across your whole garage. So as you unlock upgrades to your speed, drift, armour and more, those upgrades apply to every vehicle. You’ll start out with access to only a few vehicles to begin with you you’ll unlock more as you play – there’s a total of 40 in the game, and each one is delightfully unique. There’s your typical beach buggy, of course, but monster trucks, moon rovers and more will become available later on. 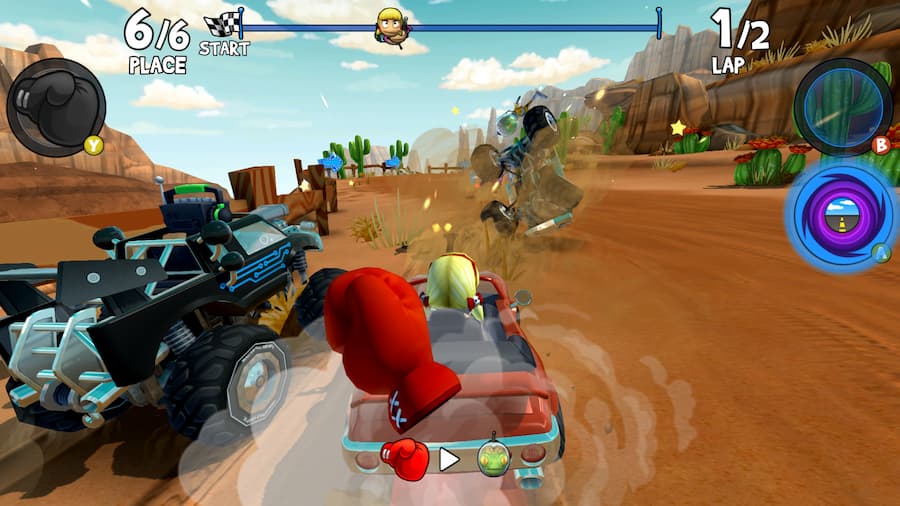 The same goes for Beach Buggy Racing 2: Island Adventure‘s character roster. Only two will be available at the start of the game, but by completing grand prix races in the career mode, you’ll unlock more, up to a total of 14. Each character has their own signature power-up, so it’s worth experimenting to find one that you like best.

Like any karting game, Beach Buggy Racing 2: Island Adventure lives and dies on its use of power-ups. It wouldn’t be the same without them, but holy hell do they get frustrating. More and more power-ups enter the mix as you progress through the game; some are very helpful as the user, but as the recipient will leave you turning the air blue. It’s all too easy to be completely barraged by multiple attacks, going from first place to last in a matter of seconds. Like with any kart game, your success in Beach Buggy Racing 2 often doesn’t feel down to skill – luck plays a big part too. 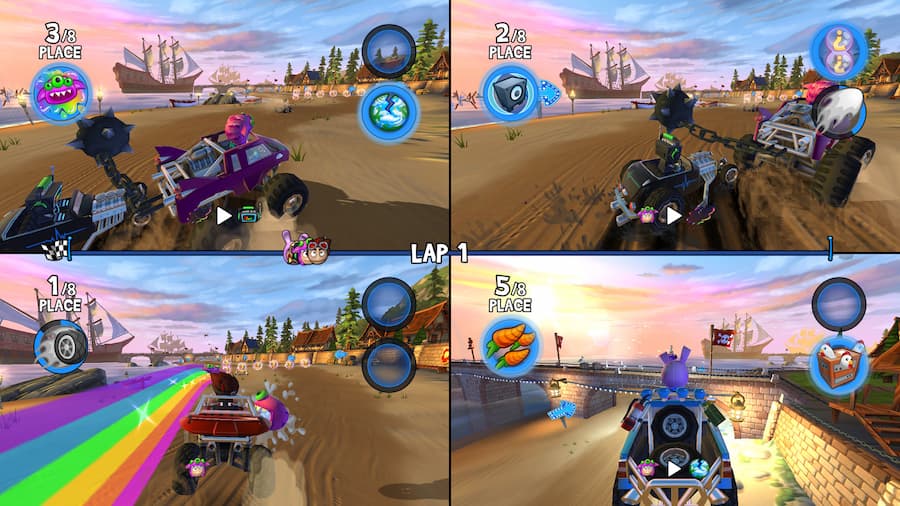 AI opponents can be too aggressive at times, and even if you’re right at the back of the pack you’ll still get more than your fair share of attacks. Don’t expect a helping hand here to boost your position – it’s relentless. Thankfully, you can adjust the game’s difficulty at any time. ‘Normal’ seems to be a fair place to play, but there’s also a casual difficulty if you’re struggling, and two harder difficulties if you’re a glutton for punishment.

No matter what difficulty you play on though, Beach Buggy Racing 2: Island Adventure is a joy to control. Your vehicle is light and responsive and, providing you’ve not just been the victim of a pick-up, always feels in your control. Drifting around corners is easy to do – simply tap the brake – and zooming along the variety of colourful and well-designed tracks is fun. 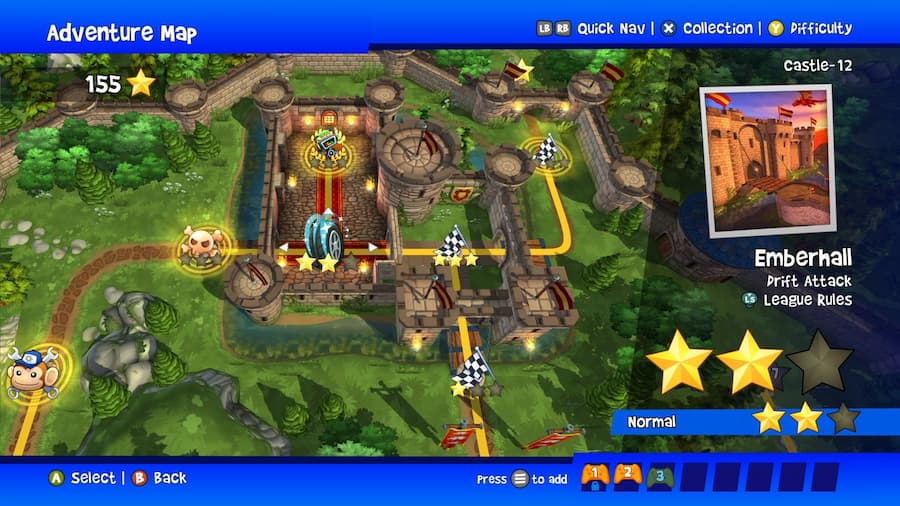 Outside of the career mode, when jumping into a single event you can customise it to your heart’s content, and choosing your own rules can lead to some rather entertaining consequences. You can decide what pick-ups will be available (if any), along with the amount of laps, the course and the amount of opponents. The range of options available is a nice touch; especially if you’re strapped for time, you can play exactly how you want to.

Beach Buggy Racing 2: Island Adventure can be a relentless beast – like any karting game, you can expect to be constantly inundated with attack after attack, and it can get tiring. But racing around its colourful, upbeat tracks remains fun, and the sheer amount of content here makes it excellent value for money. Whether you want to race solo or against friends, there’s plenty here to keep you entertained.

Beach Buggy Racing 2: Island Adventure is available on PC, PS4, Xbox One and Switch. We reviewed the PS4 version of the game (on PS5) with a code provided by the publisher. 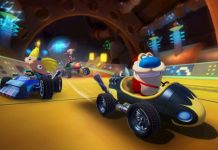 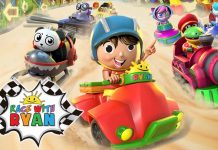 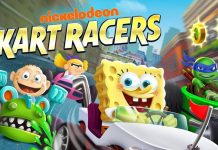 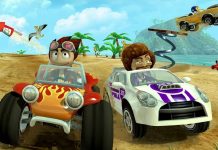