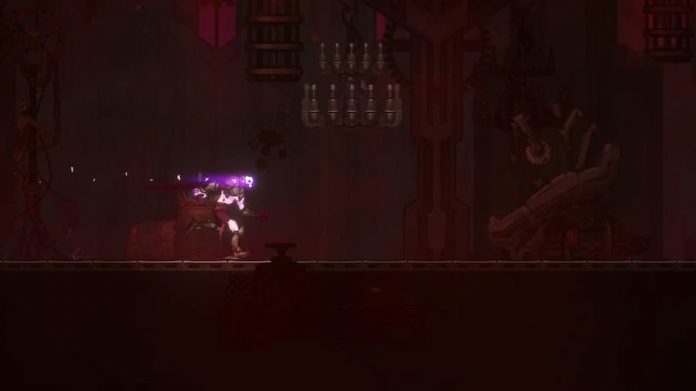 Although it’s been out on PC and Switch for a while, Rogue-like action platformer Collapsed has just made its way to PS4. And if you’re a fan of the genre, it’s worth dipping your toes into.

Collapsed is a little rough around the edges. It doesn’t have the polish or finesse of other Rogue-likes; forget Hades or even Neon Abyss. But in the heat of the action, when you’re in the middle of one of Collapsed‘s action-packed levels, it doesn’t matter. It doesn’t matter that the game’s story is wafer-thin or the unlockable upgrades aren’t quite as good as you’d like them to be. The moment-to-moment gameplay is what keeps you coming back, and it feels great.

When you start out, Collapsed allows you to choose one of four character classes. Each one has their own melee and ranged weapon, and feels slightly different to play. One might have a slow but more powerful melee attack, while another has a quicker attack that deals less damage. Each character’s ranged weapon performs differently too, varying from a shotgun-type weapon to an ammo-hungry assault rifle. Your weapon type stays with you while ever you stick with the same character, so it’s important to find the class that feels best.

Despite being a Rogue-like, Collapsed carries over a lot of your progression when you die. You’ll not lose anything in your inventory, and you’ll earn currency as you play which can be used to upgrade your character via a branching skill tree. Even better, that skill tree applies to all characters of the game, so you can easily play as a new character class without feeling like you’re starting again from square one. Your inventory can even be shared across characters by placing them in storage. It’s nice to feel like no run through Collapsed has been wasted, even if you don’t get particularly far.

Like any Rogue-like, you will end up retreading the same ground again and again in Collapsed, although thanks to a level of random generation, it never feels too repetitive. Enemy placements, level mapping and loot is different every time, and there’s a number of different environments too. 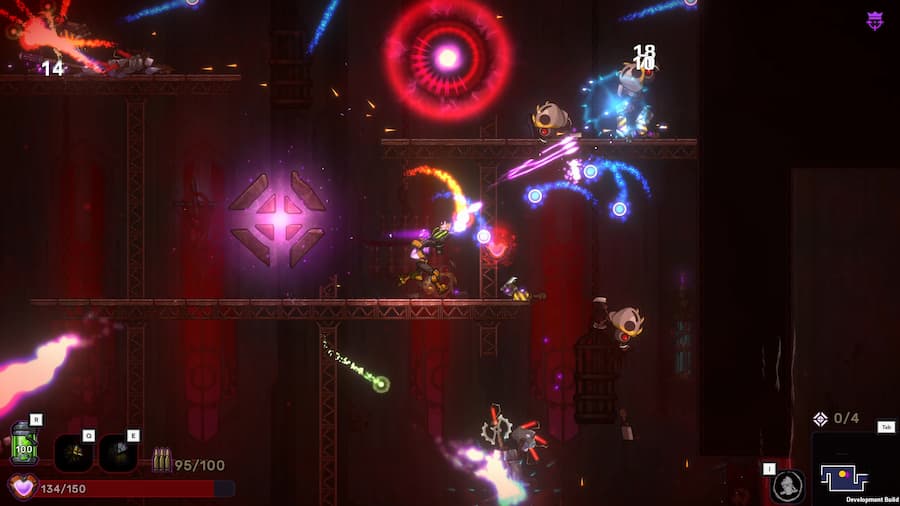 The core gameplay never changes up, though, and that’s where most of the enjoyment of Collapsed comes from. You’ll use a combination of your gun and melee attacks to slice and shoot your way through a range of enemy types. Twin stick mechanics allow you to shoot enemies from all around you, and you’ll have to make good use of your dodge function to move out of the way of incoming ranged attacks. At its most intense, Collapsed feels very much like a bullet hell game. And its in those craziest of moments where Collapsed shines.

Combat is a hell of a lot of fun, even though it’s difficult. You likely won’t last very long for your first, second or third attempt, but each time you dust yourself off and spend a skill point or two, you’ll get that bit further, destroying more enemies and eventually making it to the first boss. It’s fast-paced and responsive, and taking down enemies is extremely rewarding. No foe feels too much like a bullet sponge; most go down with one or two hits, depending on what weapon you’re using, but when you’ve got a screen filled with a couple of dozen enemies, of a handful of different types, all attacking you in weird and wonderful ways, it’s chaos. Glorious, frenetic chaos. 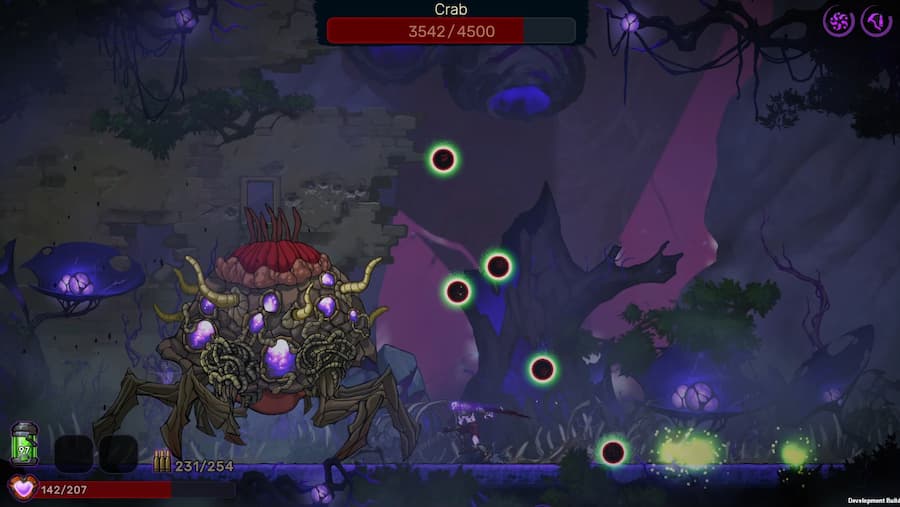 What does let Collapsed down somewhat, though, is the ‘loot’ that you find while playing. You’ll find a constant supply of health and bullet pick-ups, keeping you in the action for as long as possible. And there’s also an array of upgrades for your armour, gun and melee weapon. Unfortunately, these upgrades aren’t particularly exciting. They just don’t provide the same thrill as finding a completely new weapon; most of the effects – aside from the rare upgrades that let you fire additional bullets or suchlike – aren’t noticeable, and it’s difficult to know what upgrades are better than others. It requires a lot of trial and error, at least in the first few hours of the game.

Thankfully, as you progress through the skill tree, you’ll unlock new upgrades that will begin to drop as you play. Some of these are slightly more interesting, but there’s nothing that’s a real game-changer, which is a shame.

The boss battles are the real highlight of Collapsed, but if you go into one ill prepared, you’re unlikely to last long. Making your way through standard levels means finding a portal that can take you to the next stage, and eventually you’ll happen upon a boss. You better hope you’re full up on health and ammo before you get there, because you’ve got a good challenge on your hands. There are 15 different bosses throughout the game, and which you get is pot luck. They all have their own attack patterns; a mixture of bullet-hell and melee attacks, so you’ll need to stay on your toes, make ample use of dodging and learn their patterns. 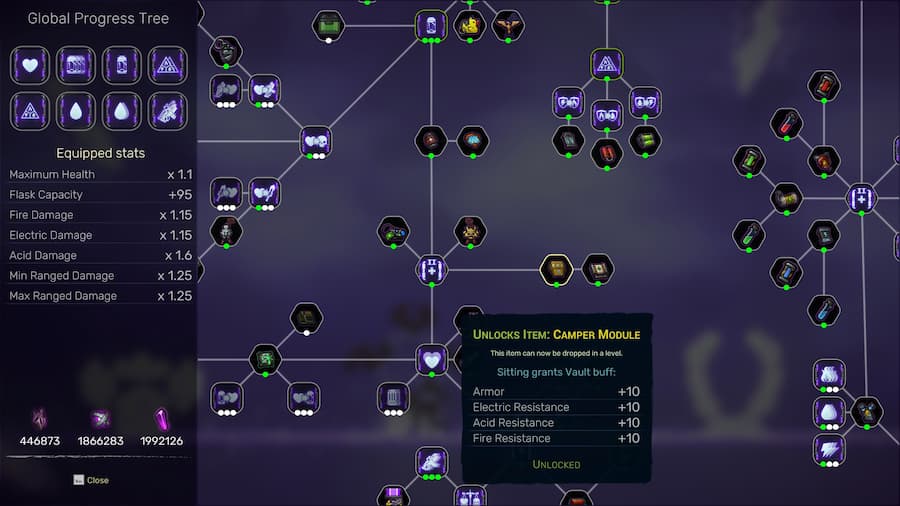 Defeating a boss doesn’t mean your journey’s over, either; you’ll continue on into another set of levels, with more bosses waiting for you. Eventually, progressing far enough means unlocking a new difficulty level, but expect many, many attempts of the first before you get there.

Thanks to Collapsed‘s excellent moment-to-moment combat, starting again over and over never feels like a chore. And persistent upgrades alongside a permanent inventory means you constantly feel you’re making progress, even after several dozen premature deaths. It’s just a shame those upgrades aren’t more exciting and rarely make much difference to gameplay. Still, when blasting and slashing through enemies is this much fun, it hardly matters.

Collapsed is available on PC, PS4 and Switch. We reviewed the PS4 version of the game (on PS5) with a code provided by the publisher.