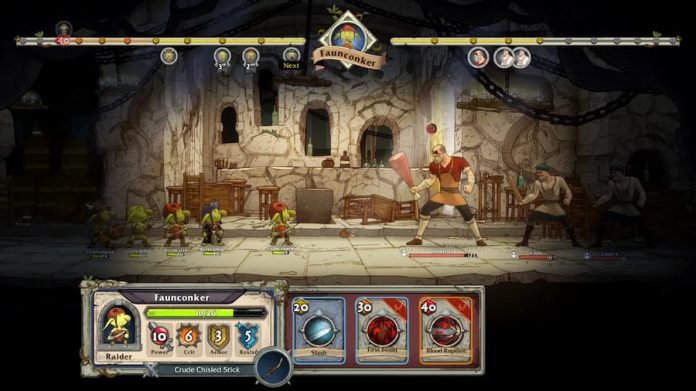 Goblins get a raw deal and now Goblin Stone is going to put things right.

Because, let’s face it, it’s about time goblins stopped being more than just entry-level RPG fodder. Imagine the scenario; you’ve finished goblin school, which is definitely a thing, and you’re about to take your first steps into the big wide world. Five minutes later you’re being skewered just so your murderer can get one step closer to unlocking “Barbarian’s Frenzy”.

That said, it’s down to your leadership whether your goblin troupe end up on top or six feet under. But Goblin Stone, an upcoming turn-based RPG, expects them to die, at which point their ancestors will take up the torch. It resembles a green-skinned version of The Darkest Dungeon, with your troop participating in all manner of side-on scraps.

Goblin Stone has got our attention, particularly since you’re playing as the underdogs. Though being able to “selectively breed the next generation of genetically superior fighters” sounds a little bit suspect.

It’s scheduled to hit the PC in 2022, with a public demo arriving this March 29th. You can check out the trailer below or wishlist Goblin Stone on Steam right now.