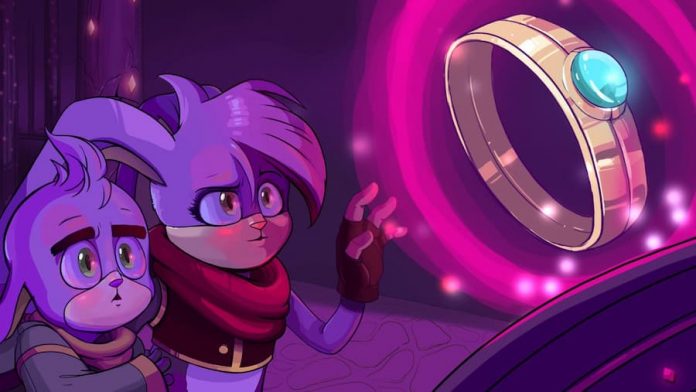 Many games try to recreate the magic of 90s platformers, but few do it quite as well as Kaze and the Wild Masks.

Putting you in control of Kaze, a cute but hardcore bunny, your job is to make your way around the Crystal Islands in order to lift a terrible curse that’s been placed upon them. The narrative is admittedly thin on the ground, but this isn’t a game that requires a deep narrative in order to get players involved. Its gameplay speaks entirely for itself.

Part of this curse seems to be turning vegetables into giant monsters, so as you make your way through Kaze and the Wild Masks you’ll come up against sentient carrots, tomatoes, pea pods and more. Most of them don’t pose too much of a threat to Kaze; a simple bounce on their bonce or a spin attack will see them disappear.

But that doesn’t mean Kaze and the Wild Masks is a walk in the park. Far from it: this is a fiendish platformer that really wants to test your mettle. Its first couple of levels will ease you in gently, but it won’t be long until you’re up against a frustrating section. While random enemies rarely give you a problem, navigating the game’s environmental dangers will. And most often, that comes when Kaze is donning one of those titular ‘Wild Masks’.

You see, as you progress through Kaze and the Wild Masks, you’ll come across four animal-themed masks. When Kaze wears them, she gains new abilities. By default, Kaze can run, jump, do a spin attack, and hover in the air thanks to her long ears. But don the eagle mask, and she can take to the air, Flappy Bird style, tapping ‘X’ to fly upwards and releasing it to go down. The shark mask allows Kaze to swim underwater, giving her a powerful ‘dash’ ability that’ll destroy enemies in her path. With the tiger mask, Kaze can dash through the air a short distance and climb walls. And finally, the lizard mask essentially turns Kaze and the Wild Masks into an auto-running game, where your only input is to jump or stomp. 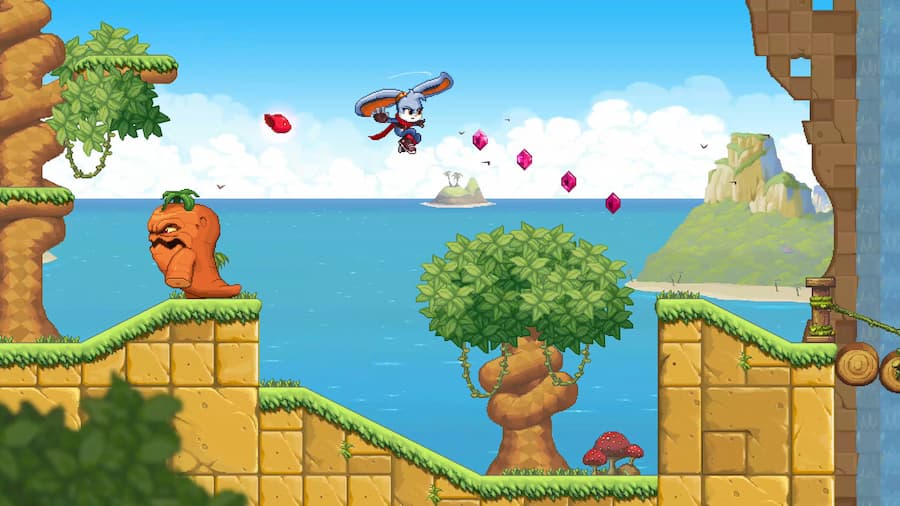 While each of those masks does a great job of changing up the gameplay somewhat and helps to keep things varied, they do present their own problems. The auto-running lizard mask sections are particularly irksome; platform games rely on well-timed jumps by default, but here your jumps need to be precise to the nth degree. One wrong button push and there’s no recovering. You’ll typically be required to make your way across small platforms, jumping on some enemies and dodging others. Executed perfectly, these sections will make you feel like a badass. But expect to fail at least a dozen times before you get there.

Checkpoints could be a little more generous in Kaze and the Wild Masks. Some sections are rather long and require a lot of precision, and it’s frustrating to have to do the whole thing again should you inevitably fail. Even on the easiest difficulty, where extra checkpoints are placed, you’ll occasionally still feel like they’re too far apart. Fail enough times and you’ll be asked if you want to skip a level, which is a nice lifeline – but chances are you’ll want to keep trying. Because you know you can do it. You’ve just got to keep trying. 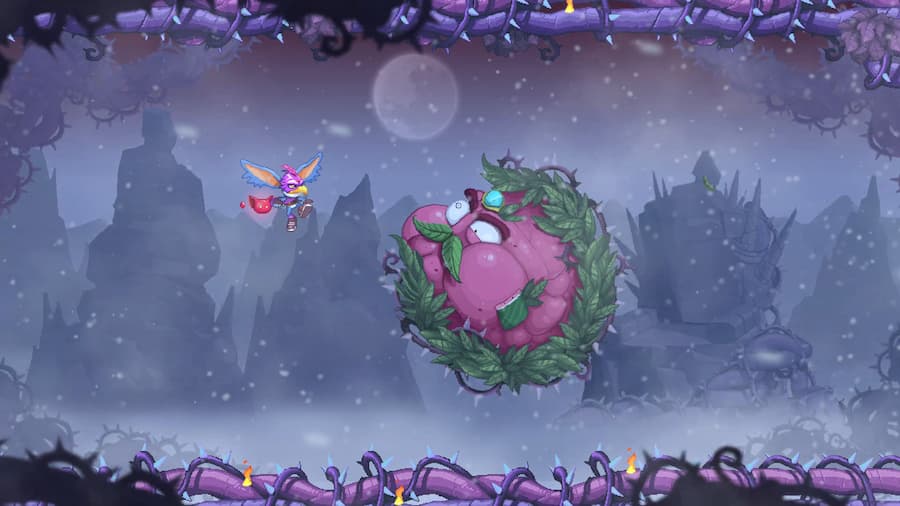 And that’s the thing with Kaze and the Wild Masks. As tricky as it can be at times, it’s so well-made that it’ll keep you playing, even through the most frustrating moments. It looks absolutely beautiful – perhaps one of the nicest pixel art games I’ve seen in some time. Playing is satisfyingly smooth, too. No matter her form, Kaze responds to your inputs instantly. As such, when you do die, it never feels unfair. It’s just a case of getting your button presses and timings just right.

The bosses deserve a special mention. Each world of Kaze and the Wild Masks ends with an epic boss fight. They’re traditional in design, though each completely different from the last. You’ll need to learn their attack patterns, spending most of your time dodging until the right moment presents itself to attack. Get them three times – the magic number – and they’re down. All except the final boss, that is, who throws in some extra curveballs. Not only do you need to fight the boss directly, you’ll also need to complete four short platforming sections – one for each of Kaze’s mask. It’s a gruelling but thrilling fight that will get your heart racing – not least because there’s no checkpoints at all throughout the whole thing. 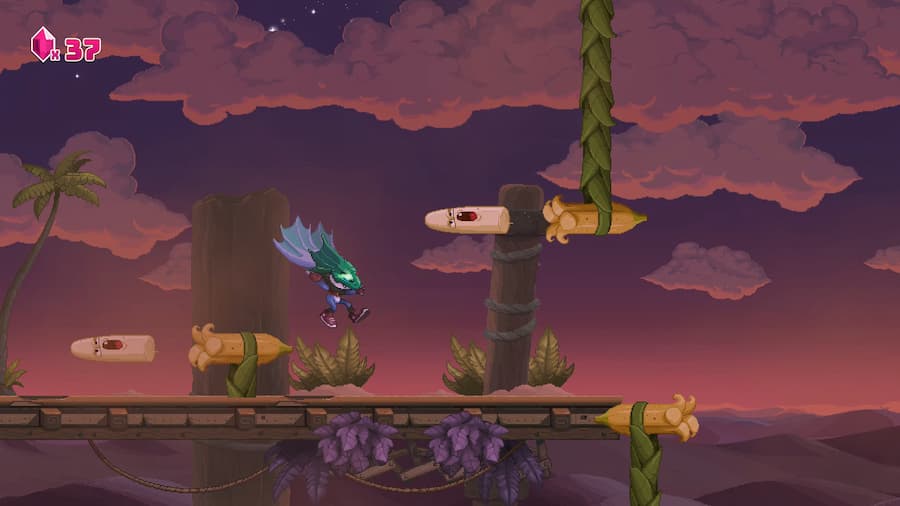 You’ll be able to complete most of Kaze and the Wild Masks‘ levels in a matter of minutes; aside from those afore-mentioned frustrating sections, running from one side of the level to the other never takes too long. But there’s plenty of reason to go back thanks to a host of collectibles. Would it be a true throwback platformer without them? Of course not. You’ll collect gems as you play, with a goal to pick up 100 before the end of the level. Then there are the letters K-A-Z-E to collect, and each level also hides two bonus levels, each of which will reward you with one half of a gem when completed. Finally, completing a level will unlock a time trial mode. For true completionists, there’s a lot to sink your teeth into here.

For fans of classic 2D platformers, Kaze and the Wild Masks is up there with the best of them. Even at its most frustrating, the gorgeous artwork and excellent craftsmanship will keep you playing. It’s a shining example of what a great platformer should be, and just goes to show that the classics never go out of style.

Kaze and the Wild Masks is available on PC, PS4, Xbox One, Switch and Stadia. We reviewed the PS4 version of the game (played on PS5) via a code provided by the publisher.