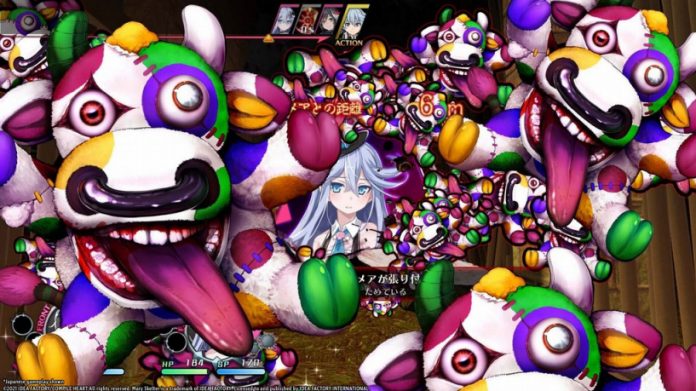 The series began with a prison that was 666 meters underground (that’s just asking for trouble) but this concluding entry takes you to a living prison the sky. Yes, it’s absolutely as mad as a fish, with monsters that look like they’ve been designed by a horde of Red Bull fuelled, demon-possessed children.

Fortunately, if you’ve missed out on the first two Mary Skelter games, Mary Skelter: Finale takes a leaf out of Shenmue 2’s book and will include a detailed recap of the previous two games. Unlike Shenmue 2 and 3, however, this game is set to actually conclude the trilogy. Also unlike Shenmue, you’re not stuck with one dull-as-a-plank character, you can switch between up to six groups of adventurers, each with their own individual stories.

Fans of previous Mary Skelter games should be right at home, though there are a few new mechanics at play. There’s a faintly disturbing feature whereby your screen gets obscured by smaller creatures, which is on top of invincible creatures that roam the dungeons. It sounds like trying to fight Resident Evil 2 Remake’s Mr X while someone shoves their hand in your face.

There’s no concrete release date for Mark Skelter: Finale but, unlike the game’s characters, it’ll see the light of day this Fall on Playstation 4 and Nintendo Switch, both as a physical and digital release. You can check out the opening movie trailer below, which should give you an idea of how full-on this title promises to be, and visit the official site here.