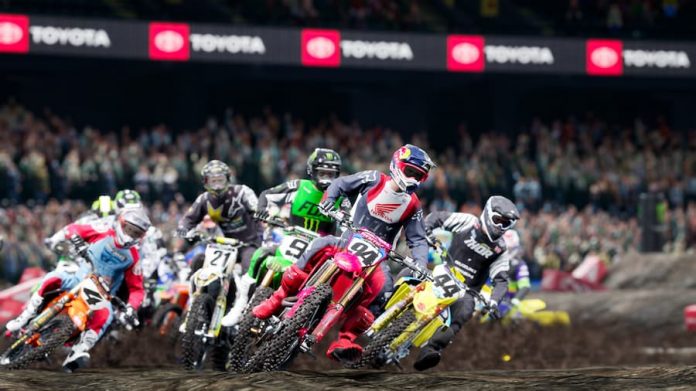 Another year, another Monster Energy Supercross game, but what makes this fourth entry in the series special is that it’s the first to land on next-gen consoles.

For a start, there’s the career mode. Monster Energy Supercross 4 does away with the bog-standard season format which just goes from one race to another. Now there are three separate career pillars: Futures, in which you cut your teeth, Rookie, in which you start to compete, and Pro, where you really need to be at the top of your game. You’ll still be starting at the 250SX class and making your way up to 450SX, but now there’s more to do in between race weekends, making your career feel a little more personal.

You can take part in up to three training sessions between each main event, for example, and the points you earn in them can be pumped into a skill tree to improve your rider’s stats. Bonus events pop up too, in which you might be tasked with completing a challenge such as performing a set number of Whips, or simply complete a charity race. Old career mode elements return as well, of course, such as choosing whether to sign to a team or go it alone with sponsors. Overall, there’s nothing ground-breaking, but it’s certainly a step in the right direction. 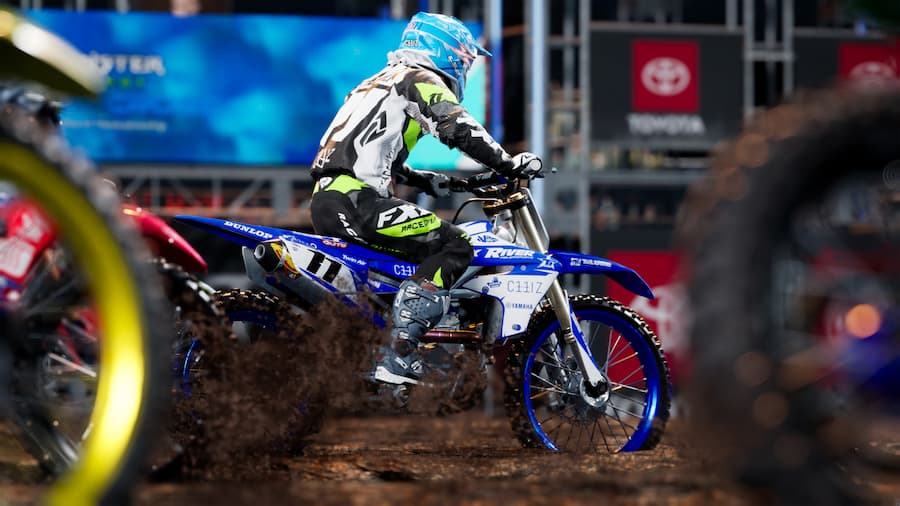 Outside of the career mode, all the usual companion modes return. There’s online multiplayer with dedicated servers, a quickplay mode where you can take part in a single event, start a championship or jump into a time trial, and a new free-roam compound. The latter is fun to blast around in, but it would be better if it was a bit more vast. The track editor makes a return too, with more pieces than ever to make your custom made tracks that bit more unique.

It’s the on-track action that will either make or break it for players this year; while there are clear improvements there are also some issues. As you’d expect of a next-gen game, the visuals are noticeably improved – a passer-by would probably think you were actually watching real-life supercross on TV if they glanced at your screen. Even better, the framerate has been doubled: Monster Energy Supercross 4 runs at 60fps on PS5, making the controls feel more responsive than ever. There’s DualSense support, too, though you’ll likely want to turn it down as it’s an assault on your hands at default settings. 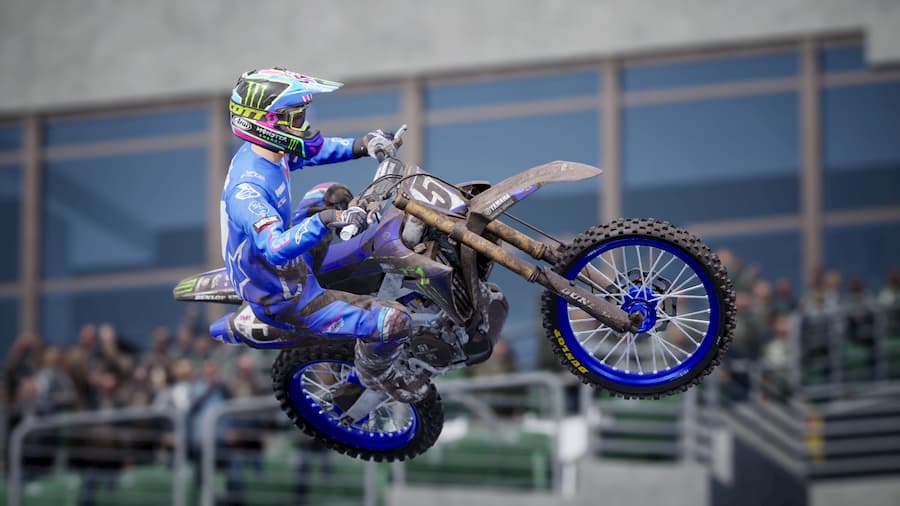 Either there’s a bug, or Milestone has consciously decided to step up the challenge for this release, however. Now, I’ll admit I’m not the best Monster Energy Supercross player, but I’ve been able to hold my own in every previous entry. So imagine my frustration with the realisation that the AI in Monster Energy Supercross 4 kicks my ass even when set on Very Easy. To consistently win you need perfect throttle control and rider positioning to move efficiently from one jump to the next – there’s very little room for error. In previous games there was a vast difference between Very Easy and Realistic AI. Here, it’s negligible.

Monster Energy Supercross 4 isn’t very welcoming for newcomers or casual racing games fans, then. And that’s further indicated by the change to the game’s rewind system. If you usually make liberal use of rewind, you’ll have to break the habit, as Monster Energy Supercross 4 now limits you. So, when you mess up, you have to think “is it serious enough to use one of my limited rewinds?”. You might rewind to correct a minor mistake that costs you one position, but then, with no rewinds left, a real disaster might occur 30 seconds later that puts you at the back of the pack. 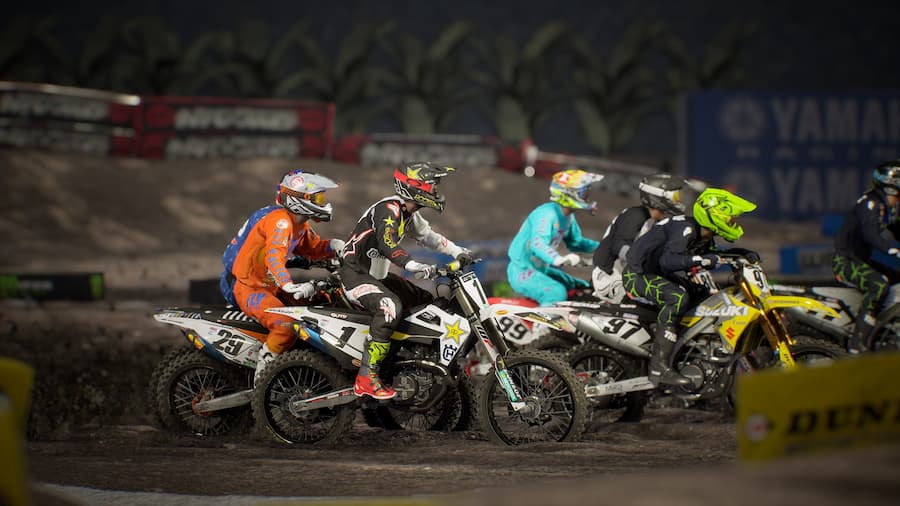 The AI also seems hit and miss. Go into a jump with a computer-controlled competitor at your side, and you might find that they magically have a bit more oomph than you, giving them the advantage. Going into a corner, they might also piledrive you towards the edge of the track as if they’re an immovable object. I’ve also had issues where the AI has messed up when in control of my bike – numerous training event sessions were ruined by the AI going off-track or crashing during the auto-start process. Many times it appeared to be because of the physics, which seem to like erratically lifting the back end of your bike up.

With all of the changes and improvements made, Monster Energy Supercross 4 should have been the best game in the series yet. And it still could be with a patch or two. But right now, the issues with the difficulty, AI and physics are notable setbacks. Series veterans who can give Realistic AI a run for their money will find plenty to be happy about, but those who aren’t so capable are likely to find themselves frustrated time and time again. It’s not so much that Monster Energy Supercross 4 is hard, it’s that sometimes it feels like it’s unfair – that the AI doesn’t play by the same rules as you. And that doesn’t lead to a fun racing experience.

Monster Energy Supercross 4 is available on PS4, PS5, Xbox One, Xbox Series X/S, Stadia, and PC. We reviewed the PS5 version with a code provided by the game’s publisher.