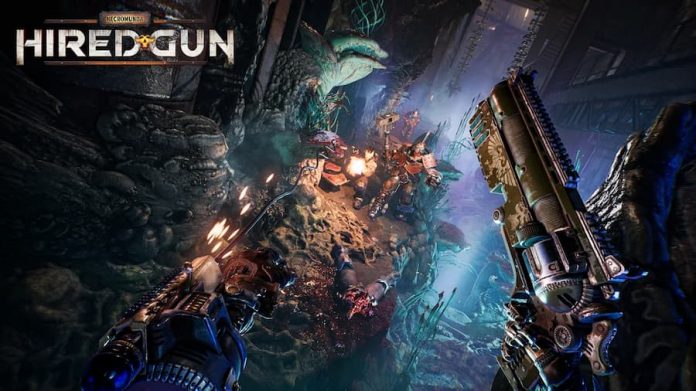 Necromunda: Hired Gun is an upcoming FPS set in the Warhammer 40K universe and it looks utterly ridiculous.

But that’s Warhammer 40K in a nutshell; it’s a silly, silly universe, crammed with ludicrously layered lore and so grim and gritty it borders on parody. But that’s why we love it and the prospect of shooting our way through this world is something we’re definitely on board with.

Necromunda: Hired Gun casts you as, er, a hired gun, blasting your way to targets in return for a paycheque. Precious few story details have been released but our money is on our “hero” killing the wrong man, er, being, and being dragged into some vast conspiracy. Consequently, you’ll be forced to blast your way to whoever’s got it in for you.

Necromunda isn’t, in fact, just a random word made up for the game, it’s a whole sub-set of Warhammer 40K, set in a gloomy undercity so, while we doubt the game will let you murder any major characters, but there’s plenty for the game to draw upon. There are also plenty of ways to mess up your targets; you can wall run, use a grappling hook and more.

You’ll be able to get your hands on Necromunda: Hired Gun sooner than you think; it’s set for a June 1st release on Xbox One, PS4, Xbox Series S/X, Playstation 5. If you want a closer look you can check out the reveal trailer below.