Rain on Your Parade casts you as a terrible cloud, determined to ruin everyone’s day.

Turning a wedding into a wet, soggy mess that will haunt the bride for the rest of her life might not seem like a cue for comedy. But Rain on Your Parade, developed by Unbound Creations, promises to be a silly, silly game that will have you revelling in just such mayhem. It reminds us of the opening of Flash Gordon where Emperor Ming is inflicting weather-related terror on Earth (with marginally less murder) and we’re absolutely fine with that.

The game takes place in Seattle which, it says here, is the “mythical rain paradise” though, in our minds, it’s forever linked with Frasier Crane. Sadly, there’s no mention of a Frasier crossover, but we can hope. You can, however, in the fine tradition of Beautiful Katamari, put hats on your cloud which is clearly the next best thing.

The trailer makes Rain on Your Parade look like a lot of fun though we’re curious as to how the game will up the ante. What nightmarish powers will you unleash on the inhabitants of Rain’s final level? You can find out when Rain on Your Parade hits PC, Nintendo Switch and Xbox this April 15th. Or, if you to inflict a little misery right now, you can download a PC demo. 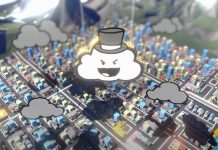 Rain on Your Parade Review