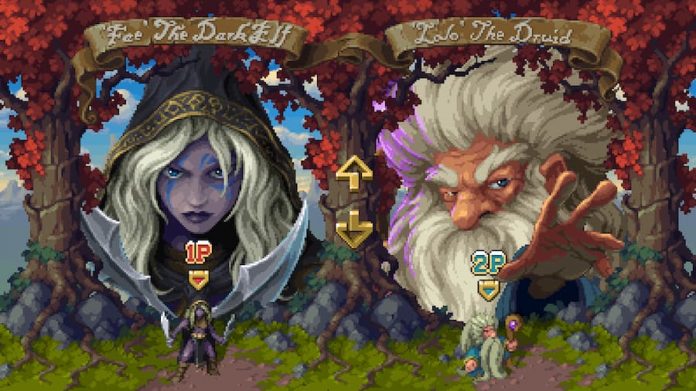 Pixel art, kick-ass characters and energetic hack-and-slash action? Yeah, Battle Axe pretty much has it all.

Out this week on PC and consoles, Battle Axe is very much a nod to the past. Its pixel art, beautiful as it is, looks like it’s been ripped straight from the 90s, and its simple but tight control scheme will transport you right back to your childhood arcade.

Casting you as one of three characters – Iolo the Druid, Rooney the Marauder, or Fae the Elf – your time with Battle Axe will be spent hacking, slashing and shooting your way through enemies. There’s a story afoot – the world is being threatened by the tyrannical actions of the evil sorceress Etheldred – but you don’t really need to be concerned about that. All that matters is the action, and Battle Axe throws you right into it.

Playable either alone or in local co-op, Battle Axe has you making your way through a number of beautifully-designed environments, killing enemies and rescuing civilians. Towards the end of each level, you’ll face off against a boss. Manage to survive, and you’ll get the chance to buy some items before moving onto the next level. Sounds easy enough, right?

Not so much. As simple as its gameplay may be, Battle Axe is going to kick your ass. Even on the easiest difficulty, you’re likely to die many, many times on your quest to save the world. And in true arcade style, you only have one continue. Die more than once, and it’s completely game over. Back to the beginning you go. 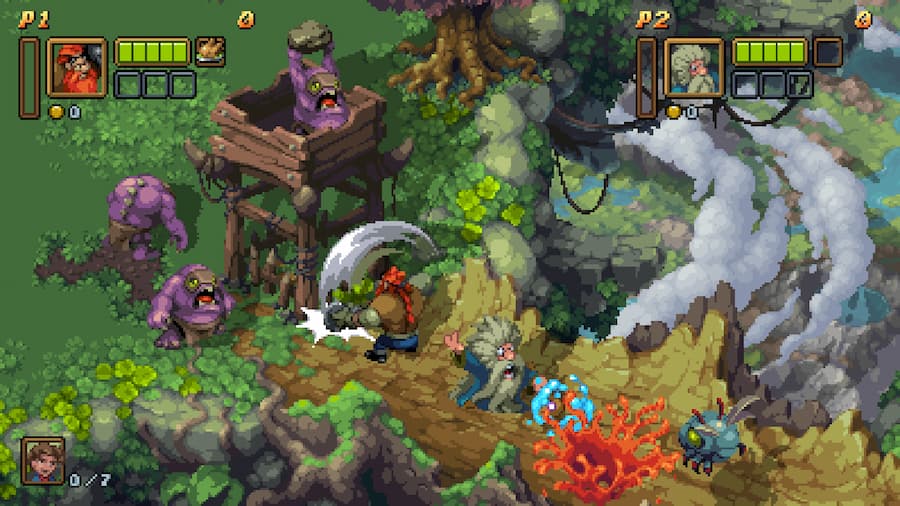 Thankfully, Battle Axe‘s levels aren’t too long, so making your way through again isn’t exactly much of a hardship. But it would be nice to at least be given the option for unlimited continues for those who want a bit of a helping hand. It’s particularly annoying in co-op, where if one player dies, they’re completely out of the game for good, leaving the other player to go it alone. If you’ve chosen to play co-op, it’s because you want to play together, not for one player to twiddle their thumbs because they died too soon.

You’ll likely want to jump in multiple times at least, if only to try out each of Battle Axe‘s main characters. Each offers a very different play style. Fae is nimble on her feet and is strongest when up close and personal. Rooney on the other hand is slow, but has a powerful ranged attack that can quickly dispatch most foes. And Iolo can use his beard to whip enemies – what more do you need to know? 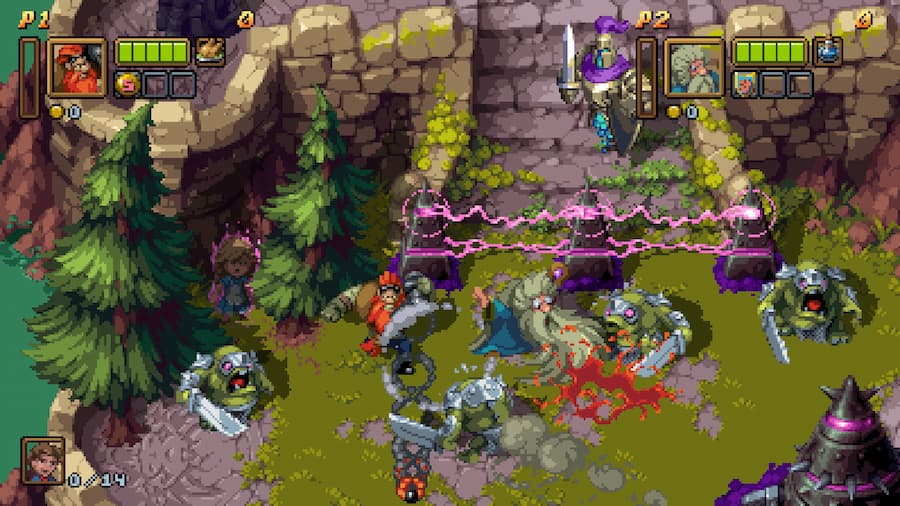 Alongside Battle Axe‘s main game mode, Arcade, there’s also Infinite and New Game Plus. New Game Plus unlocks when you’ve completed Arcade mode, offering additional challenge. But Infinite is available right away, providing some additional fun to sink your teeth into. Here, your goal is to survive for as long as you can. You’ll make your way through endless maps, jumping through a portal each time you’ve rescued an increasing number of civilians. It gets repetitive pretty fast, but it’s at least a diversion from the main game.

Battle Axe packs in a lot of personality thanks to its trio of colourful protagonists and its wonderful art style. But its gameplay likely won’t keep your attention for much longer than an hour or two. It’s a great flashback to games of yesteryear, but outside of a nostalgia hit, there’s no real reason to keep going back.

Battle Axe is available on PC, PS4, Xbox One and Switch. We reviewed the PS4 version of the game (played on PS5) with a code provided by the publisher.