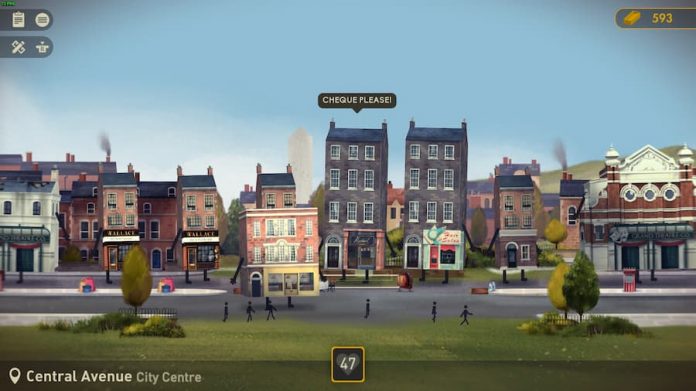 Buildings have feelings too, the title of this city builder-meets-puzzler tells you. And they do. A lot of them.

Describing Buildings Have Feelings Too as a city builder in any sense of the word is to greatly misrepresent what this game actually is. Because while, yes, your time with the game will technically be spent placing buildings and fitting them out with various accommodation, offices, shops or entertainment venues, it’s about as far removed from the likes of SimCity as you could possibly imagine. These buildings have legs! They talk! And they have very specific needs.

Here, the tasks you’re faced with are never strictly about growing a town. You’re never concerned with growing population numbers or revenue. Those things don’t exist in the world of Buildings Have Feelings Too. In fact, the buildings themselves are the population. The personification of these piles of bricks makes it hard for one to imagine small people living inside them, milling about their business.

So rather than building a town to appease the people who live there, you’re building to appease the buildings themselves. You see, they all have very specific requirements. A block of tenant flats likes to be near a pub and other residents, for example, while a lawyer’s office will thrive if it’s near upstanding citizens and a decent restaurant. Throughout the game you’ll frequently need to upgrade your buildings, and in order to do that you’ll need to meet all their criteria.

Upgrading a building in Buildings Have Feelings Too often means upgrading other buildings as part of the process. It’s in this regard that it’s most akin to a puzzle game. A building is only affected by what’s in its immediate vicinity, stretching to two or three buildings either side. That doesn’t give you a great deal of space to accommodate all of its needs, so you need to plan very carefully about what you build, and where. It can get incredibly difficult very quickly, given your limited building space and growing list of requirements. 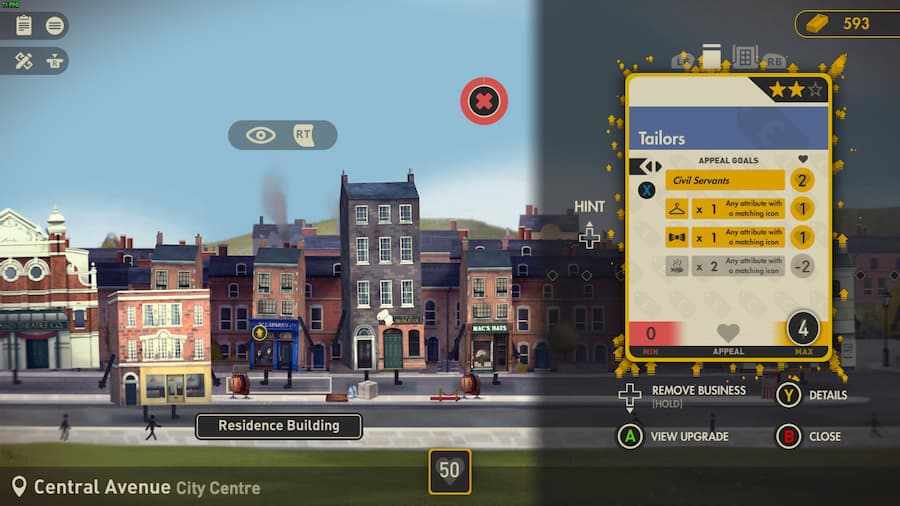 Thankfully you can move most buildings in Buildings Have Feelings Too. With the click of a button, you can uproot one, and trot it off to another location. Some buildings are locked in place, however, if they’re part of a level’s story, so learning to build around these adds an additional level of challenge. You’ll need to be careful when you move something, though, because you may leave a building behind that then fails to meet its requirements. And if a building gets too unhappy, its business will close.

Buildings Have Feelings Too is level-based, with each level presenting its own challenges. It teaches you the ropes gradually, but by the end of the first level you’ll have pretty much all the information you need to go forward. Each level will likely take around an hour to complete, but it could be much longer depending on how well (or how badly) you do. It’s quite easy to move a building that you probably shouldn’t have, and end up with a cascade of closing businesses as a result. 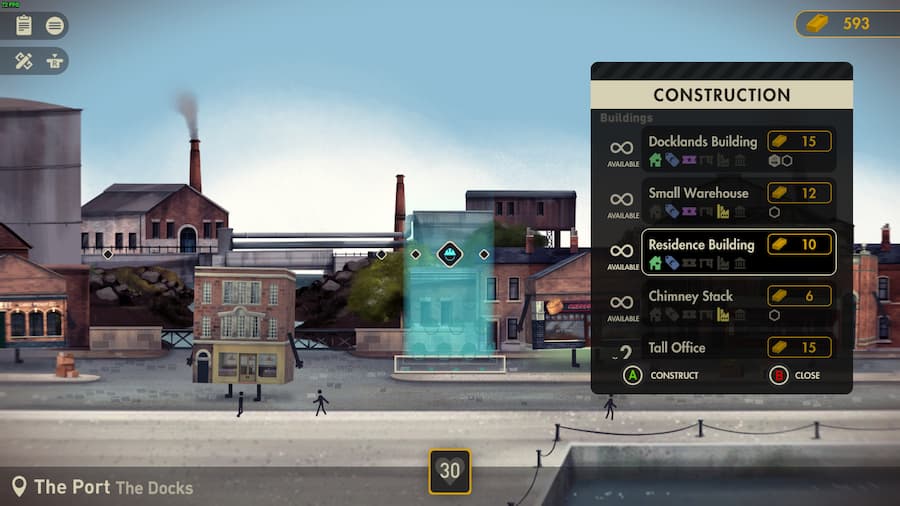 Perhaps my biggest frustration with Buildings Have Feelings Too is how easy it can be to make a mistake. There’s no ‘undo’ button and no option to start a level from scratch if you mess up. After making mistakes in the first level as I was still learning the ropes, I ended up having to restart the game as I got myself into a seemingly unfixable situation. Thankfully, most situations can be rectified with a bit of legwork, but until you completely know what you’re doing, it can be tricky.

Despite its difficulty, there’s no denying that Buildings Have Feelings Too is a lovely little game. It oozes personality, with quick-witted lines of dialogue and a premise unlike anything else you’ve played before. If you’re expecting a true city-building sim, you’re probably going to be disappointed. But if you pick up Buildings Have Feelings Too expecting a quirky puzzle game, you’ll have a great time.

Buildings Have Feelings Too is available on PC, PS4, Xbox One and Switch. We reviewed the PS4 version of the game (played on PS5) with a code provided by the publisher.