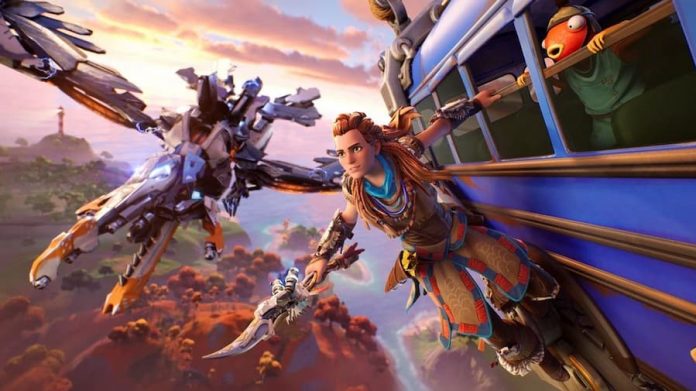 The internet seems to think so and while that’s not necessarily a good indicator, data miners have delved into Fornite and discovered references to Aloy, as well as a potential team-up with Lara Croft.

“Team Up! Aloy & Lara. Use loot from wildlife and technology to upgrade your weapons”, reads the datamined info, revealed through Reset Era. Aloy is certainly a good fit for the game, famed for using her bow to take down all comers; that said, we wouldn’t be surprised if Fortnite swaps out that bow for another, more generic ranged weapon.

As one poster pointed out, Fortnite is in danger of overtaking Mugen as the king of improbable crossovers. It’s been rumoured Family Guy’s Peter Griffin would appear in Fortnite though, compared to the data mining that led to Aloy’s “discovery”, his presence is more hearsay.

If Epic’s track record is anything to go buy, and assuming this isn’t a hoax, you can reasonably expect Aloy to be announced in the next couple of months. It’s probably no coincidence that Horizon Forbidden West, sequel to the original PS4 game, is currently in development. No doubt Aloy’s presence make a lot of Fortnite fans happy. As for us? We’re not shifting ’til Epic throws the Chuckle Brothers in there.

Update: Aloy has been confirmed – she’s heading to Fortnite starting April 15th. That’s this Thursday, so we were a bit off with our “next couple of months” estimate. Along with the Aloy Outfit, Fortnite will be getting a number of Horizon Zero Dawn themed items: a Blaze Canister Back Bling, Aloy’s Spear Pickaxe, Glinthawk Glider, Shield-Weaver Wrap, the Heart-rizon emote, and an Aloy the Skywatcher loading screen. Players on PS5 will also unlock the Ice Hunter Aloy Style.

Fortnite Lets You Explore the Story of Martin Luther King

What’s Next in Fortnite Crossovers?