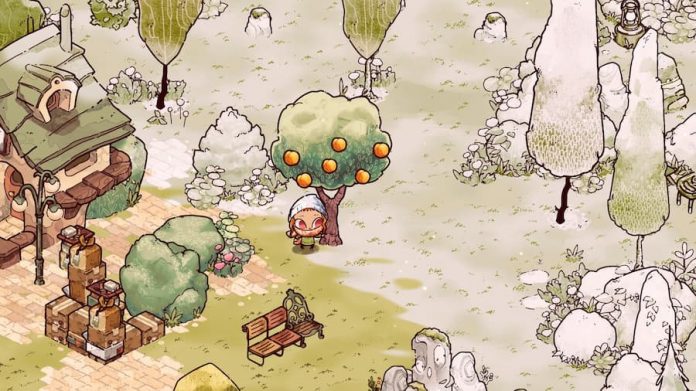 A game that takes cues from Animal Crossing, but is set on a haunted island? Count me in.

Taking on the role of a ‘spirit scout’, Cozy Grove sees you arrive on the titular island, seemingly deserted apart from your own fire and tent. It turns out you’re not quite alone, though; the island is inhabited by a number of spirits, all of whom need your help in some way. These spirits will set you tasks to complete, and by doing them, you’ll grow bonds with each spirit. Progress through the game by completing tasks and you’ll meet more and more new spirits, growing Cozy Grove as you do.

However, this isn’t the sort of game you can sit down with for hours at a time, racing through its story. No; you can only play for a small amount of time in one sitting. I’m two weeks in to my Cozy Grove adventure, only able to spend about 30 minutes with the game each day. For the first few days, the twee tasks the game has you complete are fun – you’ll scavenge for hidden items that the island’s spirits ask you for. And by gathering resources, you’ll accrue an arsenal of tools –  a shovel to dig with, a pickaxe to mine rocks with, a fishing rod to fish with, and more.

But six or seven days into your island getaway, you’ll reach something of an impasse. Those once-fun tasks start to become monotonous, and there’s little to mix it up. Tasks that are something more than simply find-and-seek often take too long to complete; I have one, for instance, that requires me to craft an item that requires several ingredients, one of which is a boiled egg. I have all the other items. I do not have a boiled egg. The recipe for a boiled egg? Twelve regular eggs. I have no way of gathering eggs other than buying them one per day from the island’s vendor. That means it’s going to take me 12 real days (providing I play every day) to complete one task. A task that will no doubt halt progress of the game at large in the meantime. 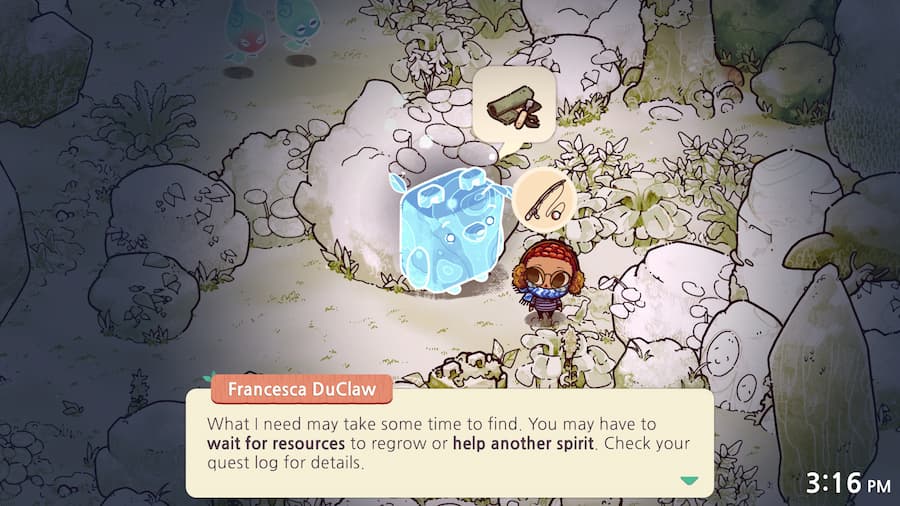 And so whilst some tasks have no time limits, happy for you to take almost two weeks to complete them, others have strict timers on them, allowing you only a few hours. It’s no problem if it’s an easy task requiring items that you have to hand. But sometimes, you have no way to complete it within the time simply because you don’t have the required item, and you have no option but to pass on it, missing out on the reward of relationship-building with the island spirit that presented it to you. It also means that inventory space becomes an issue very quickly. You can upgrade your storage, but it’s costly. There’s a perpetual feeling that you don’t want to get rid of anything in case you might need it another day (maybe I already had a boiled egg and got rid of it…) but you need to keep clearing stuff out to make room for the stuff you do need. It’s not a major problem, but it is irksome.

Limiting the amount of activity you can complete in a day is a purposeful design choice from developer Spry Fox, but without much else to do to pass the time, I’m not sure it was the right decision. Sure, you can continue to scavenge the island for anything you may have missed, or go fishing with what appears to be a limitless supply of fish, but those activities get boring very quickly. There’s nothing here that will make you want to stay on Cozy Grove after you’ve ticked off your day’s to-do list. 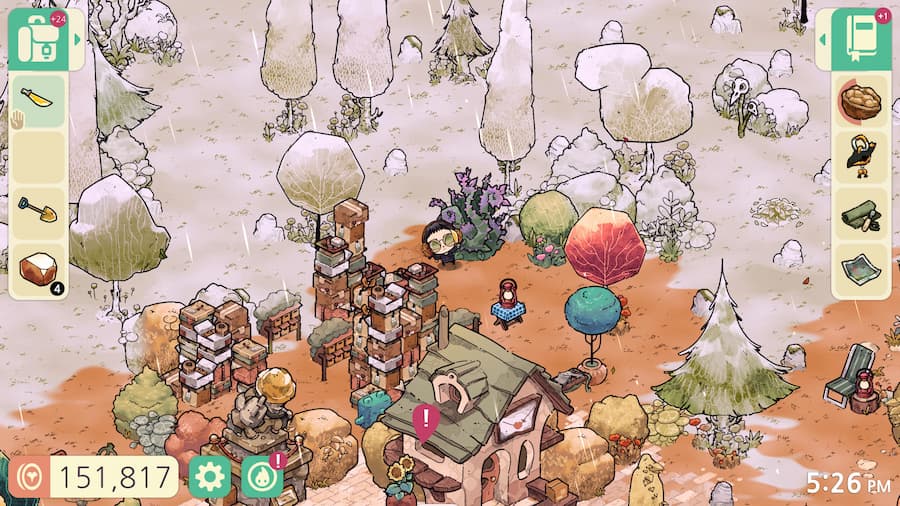 In fact, it feels at times that Cozy Grove has taken only the most repetitive, mundane parts of Animal Crossing and left out the elements that keep players going back. There’s no building of a home (outside of haphazardly slapping down pieces of furniture on the patch of ground outside your tent, that is); there’s no island planning or designing; there’s no other islands or friends to go and visit. Sure, Blathers’ museum has been replicated in the form of a captain who will archive one of each item you find on the island, but this is one of the few real rewarding elements of Cozy Grove. And after an initial surge of new finds, the amount of items you’re able to turn into him becomes a trickle after only a few days.

Even after playing the game for two weeks, I’m well aware that I haven’t seen everything that Cozy Grove has to offer. There’s a whole host of missions I’m still to receive, and there are numerous spirits I haven’t met yet. It’s a real possibility that some of those spirits may bring new mechanics to the island, presenting more things to do. But half a month of playing a game is more than enough time to form a fair opinion. Chances are, if a game doesn’t gel with someone after the first few days, they’re not going to keep playing. 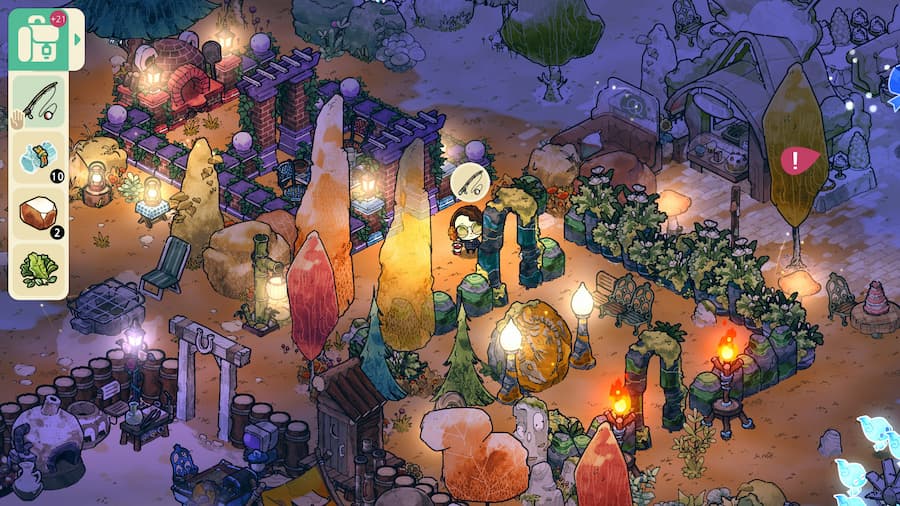 That said, I am going to keep playing. Despite my enjoyment of Cozy Grove wavering after the first several days, there’s something about my little island that keeps pulling me back. Yes, the quests are tiresome and some of the recipes ask for way too much, but there’s a certain charm. I am curious about what else awaits for me as I progress. It also helps that the game looks beautiful; its intricate hand-drawn art style starts out in monochrome, but as you complete tasks for spirits, the area around them fills with colour. It’s a sight to behold. It seemingly brings some problems, though; even on PS5, the game’s performance is lacking. Hopefully this is something that will be fixed via a patch, but currently you can expect regular noticeable drops in framerate and an overall sluggishness.

For all its imperfections, Cozy Grove is enjoyable enough, even if it does start to get monotonous after a little while. Its limited daily playtime is suited better to a mobile device, but even on console there’s something nice about having somewhere to visit for a short while each day. There does need to be more to keep players occupied outside of a handful of quests, though. And performance is an issue that really needs to be addressed. Don’t expect a replacement for Animal Crossing, but Cozy Grove will raise a smile or two.

Cozy Grove is available on PC, PS4, Xbox One and Switch. We reviewed the PS4 version of the game (played on PS5) via a code provided by the publisher. 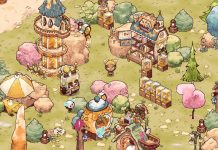 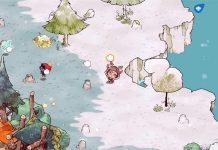 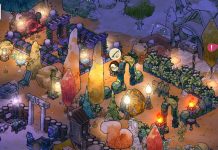