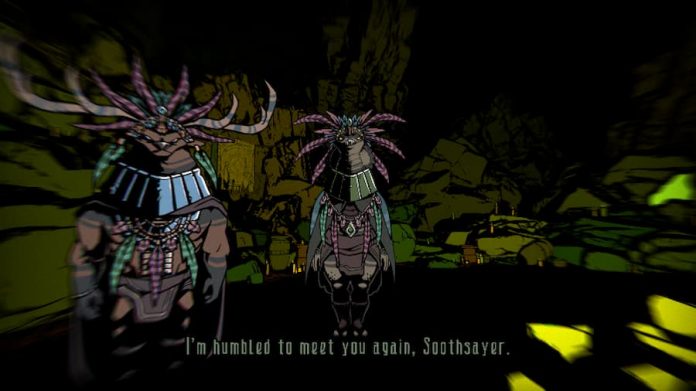 Grotto casts you as a tribe’s soothsayer, leading them by your wise council.

And by “wise council”, we mean gawping at the stars and making something up. That’s the tack we’re going to take anyway, though we’re not sure if this odd-looking game will apparently let you do you your job “properly” anyway.

Dubbed a “mystical, narrative-focused experience” by developer Brainwash Gang, you apparently spend the bulk of the game crouched in a cave, while anthropomorphic animals come to you for advice. That’s where your star-gazing abilities come in; sadly, there’s no messing around with entrails but maybe Brainwash Gang are saving that for the sequel.

The art style is certainly striking, though there’s something faintly disturbing about the wide-faced deer that features in the game’s trailer. Another slightly worrying thing is that it refers to your protagonist as a liar suggesting that, despite the game’s fantasy elements, you won’t be able to guide your tribe with anything other than your own words. We’ve got visions of buff Bambi dismembering us when our predictions don’t come to pass.

There’s no solid release date for Grotto, but it’s set to arrive later this year on PC, Steam, Xbox, Playstation, Switch and iOS. You can check out the trailer below to get a taste of things to come.