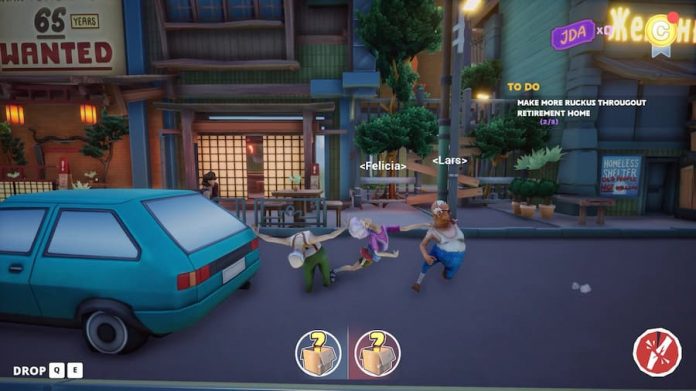 Just Die Already is launching this May, giving you the chance to experience life as an OAP.

Because, let’s face, that whole crippling loneliness thing is just complete guff. Pensioners don’t have time to reflect on the sheer misery of being abandoned by their families; they’re too busy hurling themselves off bus stands and flailing around bleeding from their recent severed limbs.

Okay, maybe the elderly aspect of Just Die Already is superficial at best; you could swap your characters out for virtually any other humanoid; human, alien, zombie, zombie alien. But what makes Just Die Already appealing is the sheer mayhem you can get up to; stealing scooters, smashing pedestrians in the face, creating some horrifying Inside-style flesh Katamari and much, more.

In fact, it reminds us of nothing so much as a deranged mashup of Saints Row 2 and 2007’s Pain. The exaggerated physics and freedom to do whatever you want certainly smack of the former, a game which let you spray half the city with a septic truck.

This “old people mayhem sandbox”, as the publishers Curve Digital have dubbed it, arrives on Nintendo Switch, PC, Playstation and Xbox this May 20th. You can check out the latest trailer for the game below.