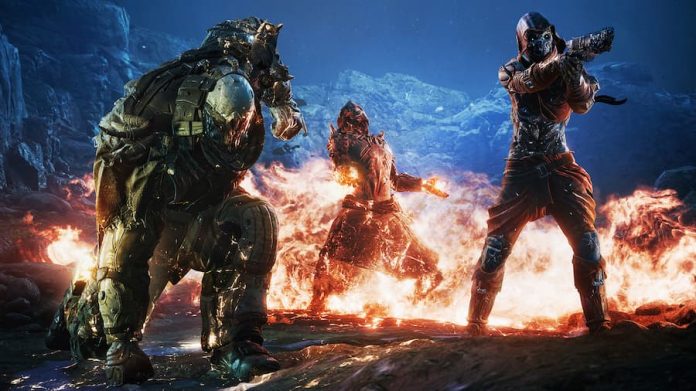 With Earth ruined, humanity takes to space to find another planet they can call home.

Enoch is the planet they decide might be best suitable, and so an expedition is sent to make sure everything checks out. That expedition includes you, an Outrider, and in a playable prologue you’ll discover that Enoch is very much not safe for humanity. Needless to say, when the shit hits the fan, stupid decisions are made and fighting breaks out. Apparently mortally wounded, you’re placed in deep sleep in the hope that you can be saved further down the line. 30 years pass – your sleep ruined by an unknown scavenger. And then comes the realisation – humanity did indeed make Enoch its home, and has once again fallen into its tendency for conflict and war.

Playable solo or in online co-op with up to two others, Outriders tasks you with solving Enoch’s mysteries and hopefully making it a place where humans can live peacefully. And why are you specifically charged with this task? Because you’re Altered – coming into contact with one of the planet’s many strange anomalies, you’ve gained supernatural powers and are pretty much immortal. At the start of the game you’ll create your character – give them a name and decide on their appearance – then shortly after comes your biggest choice – their class.

My favourite from the four that are available is the Devastator, who thrives at battling enemies at close range. Their defensive skills such as Golem and Reflect Bullets allow them to withstand assaults that others cannot. Gravity Leap, on the other hand, is an offensive skill that allows them to quickly cover a great distance, crashing down to the ground near enemies, interrupting them and causing massive damage. And then there’s impale, which skewers enemies on massive spikes that rise from the ground. If you don’t get on well with the Devastator, there’s the Pyromancer who thrives at medium range and has a nifty skill that allows them to imbue their bullets with fire; the Trickster, who’s yet another close-range fighter but with a spacetime twist; and the Technomancer, who excels at long-range combat and can support other players with turrets.

No matter which class you choose, though Outriders may initially appear to be a fairly typical third-person cover shooter much in the vein of Gears of War, it soon becomes apparent that there’s much more to it. The brisk pace of your movement and the short skill cooldown timers make battles lively affairs in which hunkering down behind cover isn’t really the best option, especially when so many of the enemies you encounter are keen to rush at you. In fact, when fighting against the many creatures of Enoch, you’re likely to not find any cover to make use of at all. Instead, Outriders wants you to keep on the move and make effective use of your skills. 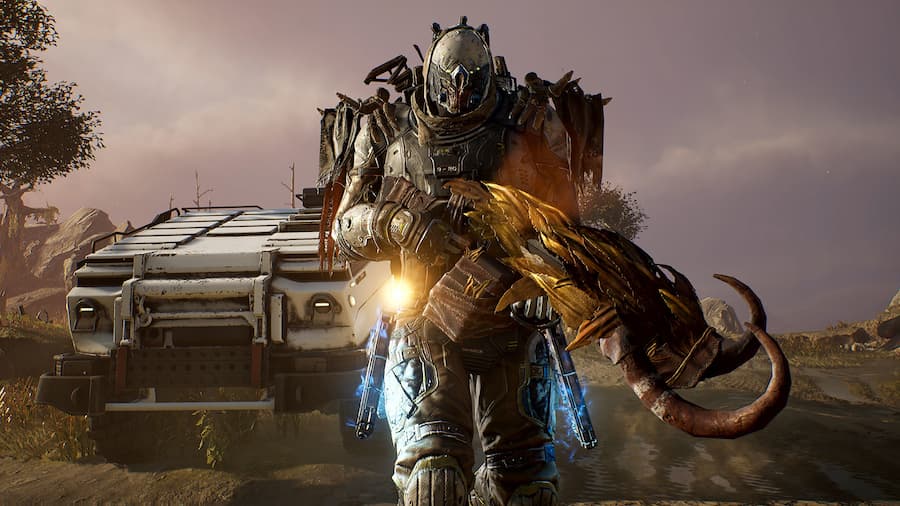 It’s a notion further enforced by Outriders‘ options for healing. There are no med kits to be found in the game, and there aren’t many skills available that offer healing as a direct benefit either. In their place are class specific perks that heal you upon either killing enemies or dealing damage to them, which can be further bolstered by naturally life-leeching weapons or those which have mods placed upon them. It means that in Outriders, your best form of defence is genuinely to go on the offensive; you need to kill and inflict damage on your opponents in order to keep your health topped up. But you need to be clever about it – things can go wrong very quickly if you’re too gung-ho.

Ultimately, Outriders‘ combat is the reason why you’ll plough through the ho-hum story presented in the main campaign. It’s also the reason why you’ll probably want to tackle all of the game’s side-quests, along with the fact that it’s a game all about loot. Colour-coded, completing side-quests is a sure-fire way to grab yourself some valuable epic gear, and perhaps even some legendary items. Even better, a gear customisation system allows you to mod, tweak and even level up your favourite items to keep you in the fight. Outriders is essentially Gears of War combined with Diablo. Throw in the combat intensity of DOOM Eternal, and you have a game that is more fun to play than I could have ever imagined. 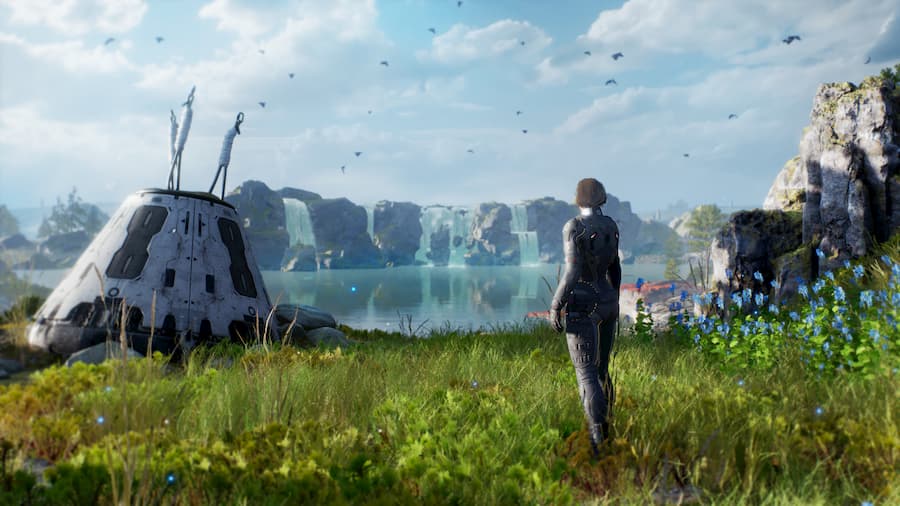 And the fun doesn’t have to end once the main campaign is over, either. In fact, for some, it might just be the start. Expeditions is Outriders‘ end game offering, presenting players with timed challenges. The better players perform, the more loot they get. There are some fifteen challenge tiers to overcome, and a large list of expeditions to complete. Those who have played Diablo III including its end game will find expeditions very similar to Greater Rifts, in which loot is rewarded upon finishing rather than being dropped by enemies in order to allow players to simply focus on reaching the end as soon as possible. They’re about as much fun, too, placing players in some seriously exhilarating combat encounters that will push them to their limits.

Needless to say, for someone like me, who is very fond of the Gears of War, Diablo and DOOM series, Outriders is something special. In the past week I’ve put more than 40 hours into it playing in co-op, and look forward to putting tens of more hours into its expeditions. But it needs some work. Requiring an internet connection to play, even when going solo, my first few days with Outriders were hampered by server issues. Sometimes I wanted to play but simply couldn’t because of constant disconnects or the server simply wouldn’t let me in. Thankfully the servers are much better now, but they’re still not flawless. 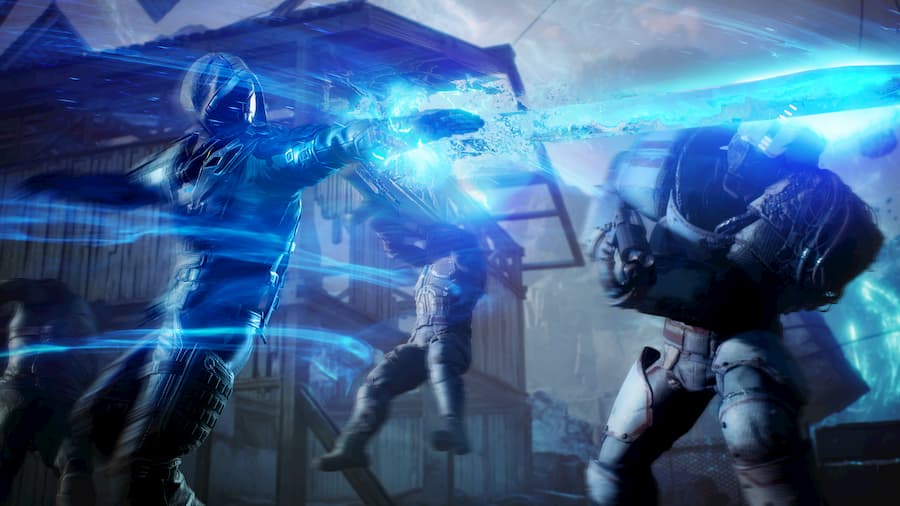 And then there are the bugs. On PS5 at least, when you encounter a server issue, the game has a habit of just crashing. In fact, upon attempting to return to the lobby at the end of each playing session, Outriders has crashed pretty much every time. There’s also been times where my skill icons have stopped working correctly, not letting me know whether my skills are usable or not. And there’s been some other miscellaneous oddities.

Still, in time, Outriders‘ bugs and server issues are likely to be eradicated, leaving its only real downside to be its poorly-told story full of loose ends. And even with that said, the narrative remains interesting and engaging – just nothing special. The real draw here is the captivating looter-shooter action that grabs you early on and simply doesn’t let go. You’ll love running into each combat encounter, commanding the battlefield like the Altered being that you are, before sweeping up any loot left by those you’ve slain. Then, back at camp, you’ll paw over your stats, improving and modding your gear as you see fit, before heading out into the fray once again. To play Outriders is to become engrossed in it, whether you’re alone or with others. Needless to say, it might just prove to be the biggest surprise of the year.

Outriders is available on PS4, PS5, Xbox One, Xbox Series X/S and PC. We reviewed the PS5 version with a code provided by the game’s publisher.