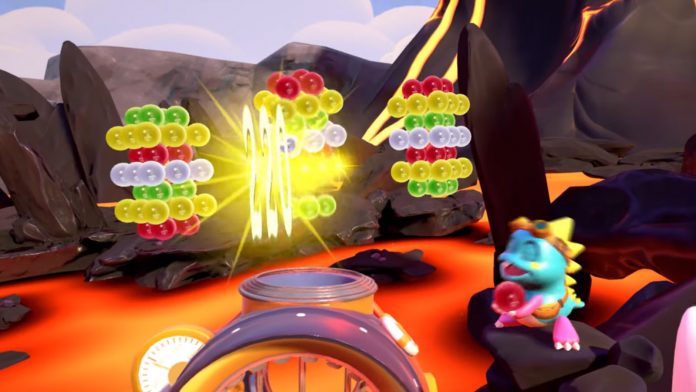 A spin-off from the original Bubble Bobble, the long-running Puzzle Bobble series sees you, as dinosaurs Bob and Bub, bursting balloons as they float down from the top of the screen. Match several balloons of the same colour and they pop, but the catch is that whether you pop them or not, the balloons keep on coming; think Tetris with an inflatable twist.

Now Puzzle Bobble VR: Vacation Odyssey is bringing bubble-bursting fun to the Oculus Quest and Oculus Quest 2 headsets. What’s different about this incarnation, however, is that it seems to be more focused on brain scratching that beating the clock. With no walls to keep the balloons in, it’s important you think about how you’re going to dispose of them, instead of just blasting away.

Puzzle Bobble VR: Vacation Odyssey will also sport a two player mode, so you can infuriate and alienate those who dare to challenge your bubble bursting skills. And, naturally, Bob and Bub both put in an appearance. You can check out the trailer below or get your hands on this VR puzzler when it hits Oculus Quest and Oculus Quest 2 this May 20th.