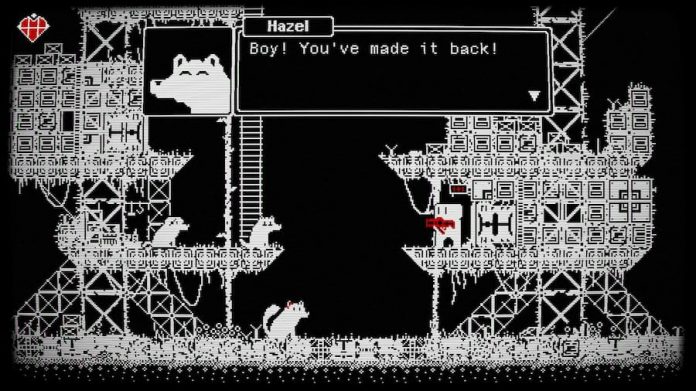 If dogs ruled the world, would crotch-sniffing be an Olympic event? That’s one of several questions that sat uncomfortably in my brain while playing Dogworld.

Fortunately, once you actually get into Dogworld, you’ll be too engrossed to ask any such questions. It’s an odd little game that looks and plays how I thought ZX Spectrum games used to, before I realised that a lot of them were a bit rubbish. It makes use of a maximum of two colours, minus the horrible colour clash you’d get on the Spectrum, adding in a CRT filter complete with scanlines. Sure, you can turn them off but you’re best of bathing in the retro-vibes.

The premise is that humanity is living underground, supervised by a robot called Daddy (there are so many jokes there I don’t know where to start) because the world above is uninhabitable. As you can guess, that’s not the case and after an accident with this pod, your protagonist ends up above ground, fending off various mutant creatures and making friends with some far more amenable canine pals.

Uncovering the truth is entertaining but it’s the blasting (and occasionally puzzling) action that makes Dogworld stand out. It’s so very, very easy to underestimate the monochrome beasties that get thrown at you, partly because you’re expecting them to move pixel by pixel, in the manner of the era they’re aping. In fact, they’re fast so-and-sos, to the point where you if you weren’t able to take aim all around you, you’d be up White Dog Poo creek. 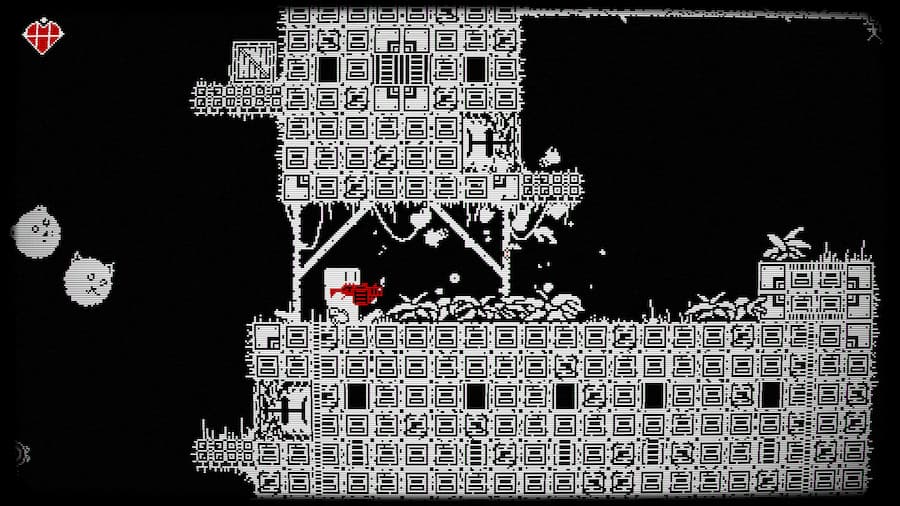 But Dogworld does, at least, give you breathing space, so you only leap into the action when you’re good and ready. But it mixes things up enough to keep on your toes when the blasting starts; you’ve just got used to mutant blob creatures when you’re tackling murderbats that fly at you from inconvenient angles. First you’re dashing through laser beams, then a few levels later, you’re clearing a whole screen full of them. I wouldn’t go so far as to class Dogworld as a Metroidvania but it’s chunked and open enough that you can choose your battlefield. Plus, there’s a little to and fro-ing but, during my time with Dogworld, I didn’t have to backtrack to previous areas.

Dogworld does trade on its retro stylings, complete with chiptune soundtrack, so if you did grow up playing monochrome games this’ll reel you in pretty quickly. But even without the nostalgia factor you’ll find it’s a fun, silly shooter that will keep you coming back for more.

And you can pet the dogs.