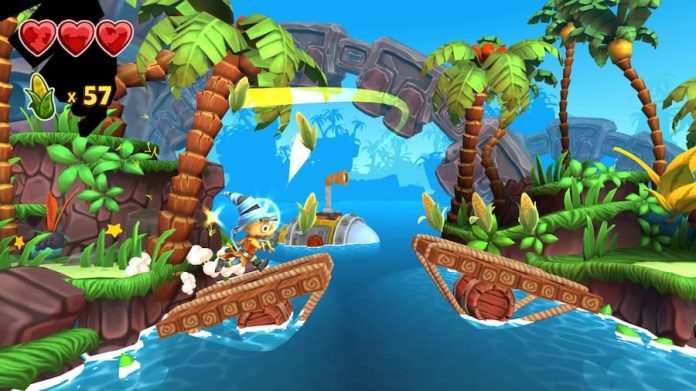 There’s a wealth of platforming games to choose from on Nintendo Switch, but this month there’s one more added to the mix: Stitchy in Tooki Trouble.

Stitchy in Tooki Trouble is a level-based platformer that tells the story of scarecrow Stitchy, tasked with recovering all the corn that’s been stolen from the evil Tooki. But story doesn’t really matter here. What does matter is making your way through each level, collecting all the corn and finding the three ‘hidden’ totems.

Since this is a game that’s aimed at ‘all ages’, it’s very easy to get to grips with. Its controls are simple: you can move left and right, and you can jump. That’s about it. There are obstacles to avoid and enemies to either avoid or stomp as you progress, but your only real goal is to reach the end. Each level is rarely more than a few minutes long, making Stitchy in Tooki Trouble the ideal game to pick up and play in short bursts.

It’s pretty nice to look at, with bold and colourful 3D graphics bringing Stitchy’s world to life. Played on a 2D plane, the visuals help add some depth and bring the game’s worlds to life. There are three distinct worlds to make your way through, each with their own theme. But regardless of the world you’re in, the gameplay remains the same: run and jump from one side to another.

This isn’t the most taxing platformer ever, and more experienced players may get bored or a lack of challenge. But it’s clear from its presentation that Stitchy in Tooki Trouble has been made with younger players in mind. And for children looking for an introduction into the platformer genre, it’s the ideal place to start. Sure, it’s not the most original game ever made, and it doesn’t attempt to reinvent the wheel – but it’s fun, it’s colourful, and it has a cute protagonist. What more could you ask for, really?

Stitchy in Tooki Trouble is available digitally on Nintendo Switch. It’s priced at £11.69/$12.99.