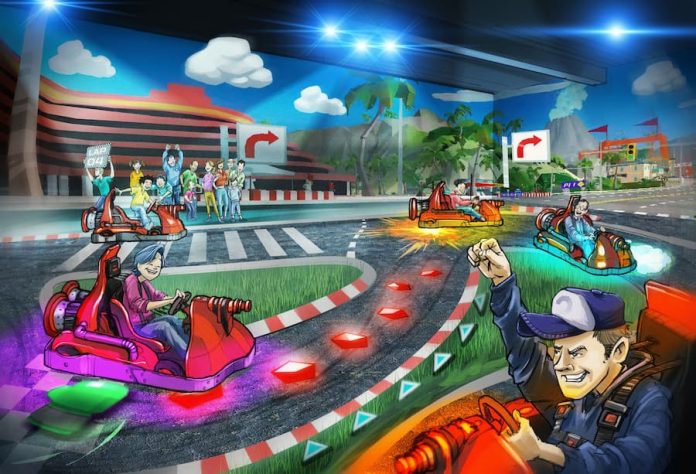 Fancy a real-world kart racing experience that definitely, honestly isn’t Mario Kart? Then Chaos Karts could be right up your Rainbow Road.

Chaos Karts is the brainchild of Tom Lionetti-Maguire, who also had a hand in the creation of The Crystal Maze Live. It’s set to launch in London this August, and will take place on a virtual track that can be swapped out after each race. No, you’re not going to be plunged into The Matrix; the karts will be real, physical vehicles, but the track will be projected onto the wall and floor.

Going by the concept video, this will also let you fire Mario Kart-style weapons at your fellow Kart racers. Though, presumably for safety reasons, they won’t spin off out of control or even slow down, you’ll just get some extra points. The karts will have built-in technology preventing you from getting too close, so there’s no bumping your opponents’ cart, something we have mixed feelings about.

So could Chaos Karts be the next big stag and hen party hit? With a minimum age of thirteen it’s certainly not aimed at small children. We got a kick out of The Crystal Maze Live; you could tell it was all built inside a warehouse, but the sheer energy of the “presenter” who took us around boosted the fun factor.

Sounds great, eh? It does on paper, but we’re a little skeptical as to how it’ll work without a physical barrier at either side of the track. We’re also curious at to whether you’d be allowed in dressed as Nintendo characters; Nintendo is notoriously litigious and has previously taken legal action against real-world Mario Kart racetracks.

The Ents Inc, the company behind Chaos Karts, has to yet to show off the full experience but if you hang around for the end of the below trailer, you’ll get a short glimpse at a scaled down version of it. When we first read that the tracks were projected, we had flashbacks to those deeply disappointing wall-projection games of our youth. The racetrack in the video isn’t as vivid if, say, it was painted on, but it does look much better than we expected and the trade-off of being able to switch tracks could well be worth it.

Chaos Karts opens in London this August 14th and tickets go on sale today, at £30 a head. You can book tickets from the Chaos Karts website, which also has more information about the attraction.