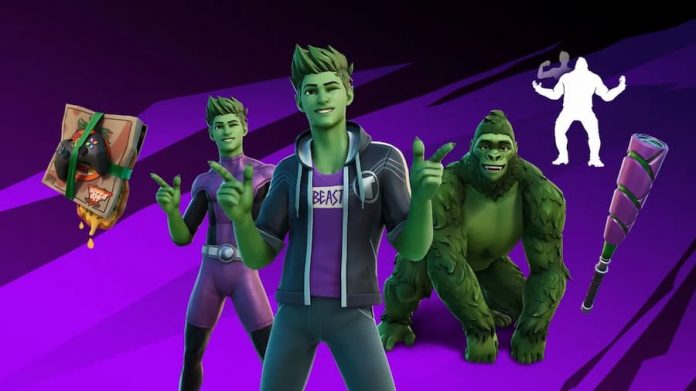 Epic have revealed that the boyfriend of Teen Titan Raven, Beast Boy will be joining her in Fortnite.

Granted, we’re not sure if Beast Boy or Raven are technically teenagers, since they seem to locked in the same kind of never-aging nightmare as The Simpsons, thanks to DC Comics. But sorceress Raven has been roaming Fortnite for the past month, so it makes sense the game would add fellow Teen Titan and current love interest Beast Boy to the mix.

However, if you’re looking forward to transforming into a T-Rex and tearing off your opponents’ top halves, you’re out of luck. Like Raven, Beast Boy’s powers have been limited to stop them wiping the floor with anyone who crosses their path. You can transform into a gorilla with the Go Ape emote, but there’ll be no monkey business in battle.

Still, if you’re a Teen Titans fan (we’d kill for Teen Titans Go skin for the pair) it’s another reason to dive back into Fortnite. Beast Boy will be joining the roster May 14th but if you participate in the in-game Teen Titans Tournament you can unlock his outfit two days early.