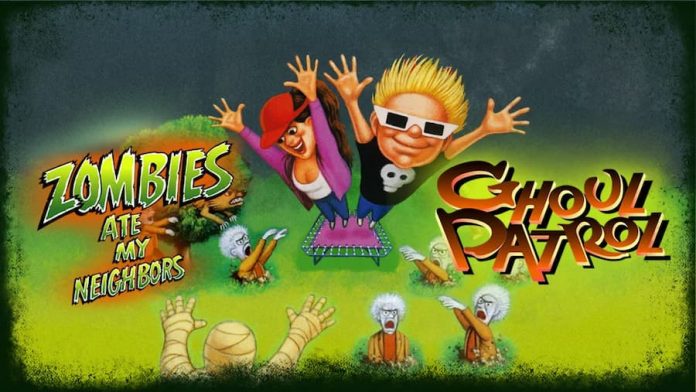 Console classic Zombies Ate My Neighbours and its sequel, Ghoul Patrol, are clawing their way back from the grave.

We never got our hands on the latter, but we spent more than a few hours blasting our way through Zombies, dispatching the living dead with our water pistols and rescuing would-be victims. On the Megadrive. When it was released. In 1993. Yes, we’re really that old.

Horrifying existential realisations aside, we’re happy to learn that Zombies is getting a new lease of life. Zombies did see a brief resurrection on Nintendo’s Virtual Console, mainly because it was also released on the SNES. But now it’ll be arriving on the Nintendo Switch, Xbox, PC and Playstation, bundled with Ghoul Patrol.

Lucasarts was responsible for creating Zombies Ate My Neighbours but the company ceased to exist years ago. However, this re-release is being overseen by Lucasfilm Games, the newly-formed company that will be handling upcoming Star Wars titles, and developed by DotEmu who had a hand in the superb Streets of Rage 4.

The games will sport some minor extras, such as a save anywhere system (reminiscent of the SNES Mini’s) and developer interviews. But for the most part it’s the old-school top-down shooting that should appeal.

Zombies Ate My Neighbours and Ghoul Patrol will arrive on Xbox, Playstation, PC and Nintendo Switch this June 29th.